by MarcPosted onDecember 30, 2018July 8, 2019
It’s come up before around these parts, but there have been two Brubakers to play in the major leagues. The more recent one was pitcher Bruce Brubaker, who had a 13-year career in pro ball, including two cups of coffee with the Dodgers and Brewers. Bruce has two Topps cards and a few oddball releases – JBF sent me his ’65 back in the day, and I picked up his ’67 at a show. I also managed to get copies of these signed, although apparently I never posted them here, or if I did I can’t find the post.
The other, and by and large more successful of the two, was Wilbur Lee “Bill” Brubaker, a third baseman who spent a few seasons in Pittsburgh in the late 30s, along with some other brief stints. I got accidentally Secret Santa’d last year from my frequent trading partner Tom of The Angels, In Order, and the meat of the package was none other than my first card of Bill, his 1936 Goudey. That was an absolutely stellar pickup, and it led me to look into what other cards Bill had out there. 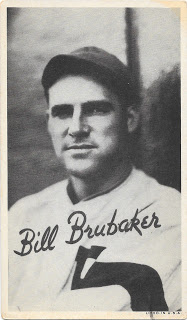 That led me into discovering that there was another 1936 Goudey of Brubaker, from the Wide Pen Premiums set. At some point I threw out a saved search for ‘brubaker goudey’ and figured I’d keep an eye out for the Wide Pen version, and sure enough in September, one popped up for cheap, so I pounced on it. It felt really good to net my second Bill Brubaker card – or so I thought. My hopes were quickly dashed by Jeff Katz and Tom Shieber when this turned out to be a previously unrecorded error in the 1936 Goudey sets. The photo is actually of Dave Barbee, which Tom was able to determine after Jeff noticed the black arm band. The card from the regular set is a much tighter crop, just a headshot really, and unless you knew what the men looked like you wouldn’t have any other clues. It’s still a really fun pickup though, and it still counts as a Brubaker in my book.
Knowing that I now owned two Brubakers (the oldest cards in my collection, too!) that weren’t really Brubakers just wouldn’t do, so I put up another search: ‘play ball Brubaker.’ Bill’s other playing-era cards are found in the 1939 and 1940 Play Ball sets. 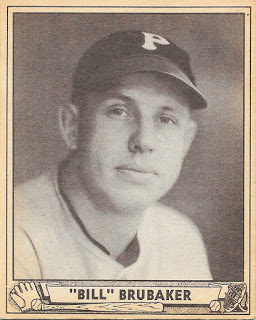 My hard work finally paid off when I landed this sweet card in a late November auction. This is the 1940 Play Ball issue – the 1939 lacks a nameplate but utilizes the same photo, which is indeed Bill Brubaker. Ah, that’s much better.

Here’s a scan of the back to boot. I’ve since learned that there’s a printing variation of these, where the collecting spiel underneath Play Ball advertises a forthcoming set of Superman cards, and since added that to my White Whale list. My dad has had a copy of this one for a bit, although I’m not certain which back it has. At any rate, this was a really fun addition to the collection this year, and it felt really nice to bring Wilbur into the fold.
There are some reprint versions of the Goudey and Play Ball cards, and a TCMA issue from the ’70s (also in the White Whale listings), and that’s it for Bill. Who knows, maybe I’ll pick up more of him in 2019?
I haven’t done the proper due diligence on potential familial connections yet, other than to know that we’re probably not close. The next time I visit my folks, I’m going to borrow a copy of the Webster’s Dictionary-sized genealogy tome that my great-uncle Marwin put together. I figure with that and an ancestry.com trial, I can probably determine just how far apart Wilbur, Bruce and I actually are. Oh, and I suppose that should include Dennis Rasmussen, too – he’s Wilbur’s grandson.
One last post to come, and it’s a doozy of a find – so be sure to check back tomorrow!

0 Replies to “Brubaker’s Dozen Finds of Ebay #2: Not One, But Two Brubakers!”