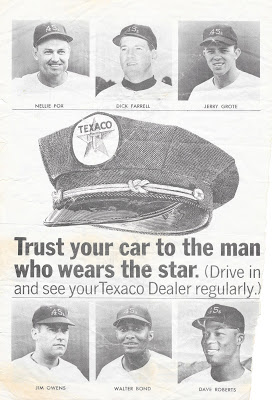 Wait, what? You’re not impressed with this torn-out page from a 1964 Colt .45s program featuring one giant Texaco ad and six small black & white headshots?
Hmm – perhaps if I turn it over… 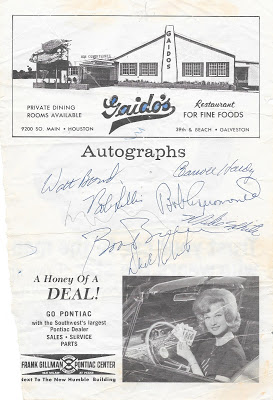 Hey, now that’s what I’m talking about! That sure is a honey of a deal down there. Oh wait, sorry – you’re probably more interested by the middle of the page. Amongst the aging and the scribbles are some names, after all!

It’s an autograph page that’s actually autographed, by seven players! We’ve got Carroll Hardy, Mike White, Dave Roberts*, and the three Bobs: Aspromonte, Bruce, and Lillis.
*The first of three Dave Roberts to play for the club. No, none of them are the current Dodgers manager.
This was one of my more recent pickups on the year (back in October, I believe), and arguably one of the most exciting. No, I didn’t pick this up because it had seven Colt .45s autographs on it, but rather because it had one very specific Houston ballplayer’s signature: Walt Bond.
You see, Bond’s tale is a tragic one, a ballplayer cut down far too early. Just three and a half years after Jim Umbricht’s death from malignant melanoma, the now-Astros franchise would see another member of its alumni fall in a battle with cancer when Bond passed away in September 1967 from leukemia.
Bond was huge, and had the makings of a star. In 1962, when he was diagnosed with the disease, Bond hit .320 at AAA Salt Lake in 132 games, earning a late season call-up to Cleveland during which he played in 12 games. Walt went bonkers for the Indians. He hit .380, slugged .800, hit 6 homers in 50 at-bats, and drove in 17 runs.

That wasn’t enough to earn him a spot on the 1963 roster, though, and after another year in the minors, Houston signed Bond in 1963. As the starting first baseman in 1964, he hit just .254 but led the team with 20 homers and racked up 85 RBI. His 1965 season wasn’t as good, however – he hit .263, but a move to the cavernous Astrodome sapped his production and the possible reemergence of his disease hampered his year. The club traded him to Minnesota just before the 1966 season, and he spent the year in AAA, having another excellent season and earning an invitation to Spring Training. He earned a roster spot and part-time playing duty, but the club released him on May 15th. He signed up with the Jacksonville Suns – the Mets AAA squad, but health problems limited him to just three games. He returned to Houston and passed away under doctor’s care on September 14 at the age of 29. His physician, Dr. Hatch Cummings said that Bond, “showed the strength of character and will that only champions possess.”

Understandably, autographs from Bond are few and far between. There are several authenticated index cards that float around on eBay in the range of $100 or so. It’s not Umbricht territory, but still pretty steep – especially for me. When this listing went live with a “or Best Offer” designation, I immediately shot out an offer on a whim and was able to nab the page for just twenty-five bucks. It’ll likely be the only signature I have from Bond for a long time, and I’m very happy to finally have him in the fold.