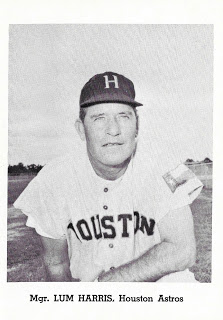 Alright, in our last entry I told you things were about to get older and more intriguing in the Brubaker’s Dozen rundown. This is one of those items that I’ve seen floating around before in varying permutations – usually singles – but I picked up an almost complete pack – er, set – well, both really, for a very good price. When it popped up in my Vintage Astros photos search, I had to jump at it.
As the title alludes, I netted myself three-quarters of a pack: A Jay Publishing Picture Pack, to be specific. To be precise, it’s the 1965 Houston Astros picture pack. I knew this without even having to reference the checklists or rosters, as these photos can only date to Spring Training of 1965, when the club was still in transition from its previous moniker, the Houston Colt .45s.
Why is this so evident, you may ask? Well, more than anything it’s the hats that are the dead giveaway. These were only worn during that spring training session, after the Colt Firearms lawsuit had forced the name change, and prior to the Astros uniforms arriving on the scene. These are still the old road jerseys, but the .45s cap had been replaced with a temporary orange H on a navy cap. There are left-side serifs on both arms of the H. By the time the season rolled around, the cap had changed to an orange star adorned by a white H. 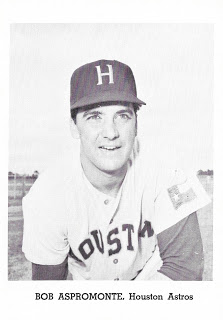 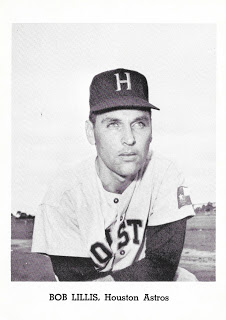 So aside from the skipper, who did I get? Well here are the Bobs, providing the core of the Astros offense at this point. 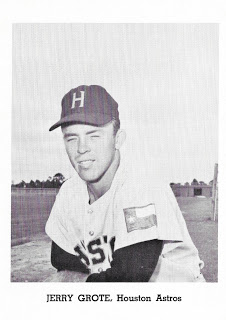 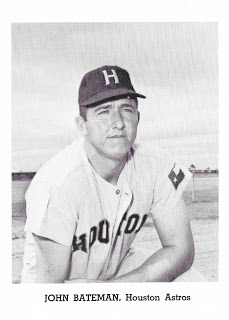 Jerry and John held down the catching duties for the ballclub. Poor Jerry didn’t have the benefit of a re-shoot. The Astros held Spring Training at Apache Junction in their early years, so this would have been in the bright Arizona sunshine. 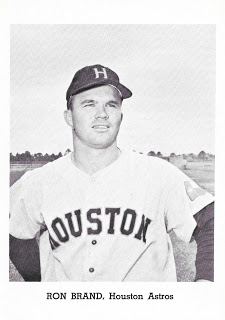 Ron Brand also took up some of the catching duties, and I believe his performance was what led the club to trade Grote away. That worked out better for Grote than anyone else. White was a hot young rookie prospect, and the son of former big-league outfielder and coach Jo-Jo White.

Which brings us to the four-eyed squadron. Eddie Kasko and Sonny Jackson both filled in at shortstop in 1965, spelling Lillis. Kasko was winding down his career, and would spend 1966 with Boston before hanging up his spikes and eventually becoming a manager. Jackson got a brief call-up, but wouldn’t see any significant time until the next season, when he hit .292 with 49 stolen bases and 42 walks. He finished second to Tommy Helms in the NL ROY voting, although you can make a pretty good argument that he should have taken the award as he finished almost a full win better than Helms by bWAR.
Jay Publishing photo packs came in full sets of a dozen. So who’s missing from this batch of ‘Stros? That’d be Dave Adlesh (a fourth catcher!), Walt Bond, and the big fish – Nellie Fox.
All told, these 5×7 photos are pretty neat – although I anticipated them to come on a thicker paper stock. They’re really flimsy, like regular loose leaf paper. Not having come across them in person before, I’d expected a light cardstock.
Ok, perhaps I shall make up for my missing day with two posts in the near future. Possibly tomorrow or Friday. Check back in to see what’s next on the rundown!

0 Replies to “Brubaker’s Dozen Finds of Ebay #8: Three-Fourths of a Pack”