by MarcPosted onDecember 3, 2018July 9, 2019
Another month has flown by. I’m sure this is just how life starts to seem, but it feels like the year has been simultaneously an eons-long trudge and yet also gone in a blink. Anyhow, it’s time to break out the TTM returns from November. 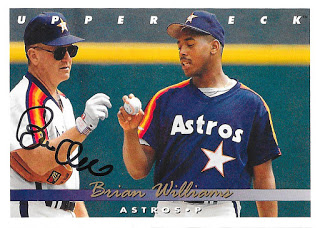 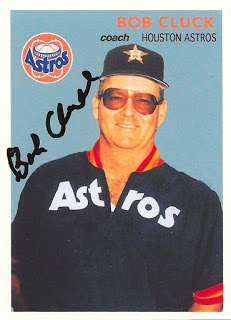 First up is former Astros pitching coach under Art Howe, Bob Cluck. Bob was a career minor leaguer who went to San Diego State, was signed by the Giants, and spent the bulk of his nine year career in the Pirates and Astros systems, at the end of which he became a player-manager and then simply a minor manager. After a couple seasons managing Houston A ball club, the Dubuque Packers, he became a scout and instructional coach for the club, holding the title of interim Major League Pitching Coach while Mel Wright was out with cancer in 1979-1981. During that time, he found Houston’s best closer pre-Billy Wagner, Dave Smith. Bob became Director of Player Development for San Diego after that, holding the position in ’82 and ’83, and was instrumental in the development of stars like Tony Gwynn, the Alomars, John Kruk, Ozzie Guillen, and Mitch Williams. In 1990 he returned to Houston, serving on Howe’s staff and helping shepherd the development of Darryl Kile, Mark Portugal, Curt Schilling, and Pete Harnisch, among others. He was with Oakland from ’96-’98 (leaving after an argument with Billy Beane), and afterward a scout for the Expos, pitching coach for the Tigers under Alan Trammell, and a consultant for the Padres. He’s currently a scout for Tampa Bay.

I had no idea Cluck was on this 1993 Upper Deck card discussing a pitch grip with Brian Williams until I looked up his address on SCN and noticed the card mentioned in someone’s return notes. “I know I have an extra one of those!” I immediately thought. He actually signed two copies of this for me, along with one of my Wilson Franks customs. I plan on sending the other copy to Brian for him to sign as well.

Bob mentioned in his letter to me that his favorite finds as a scout were Smith, Gwynn, and Kile. 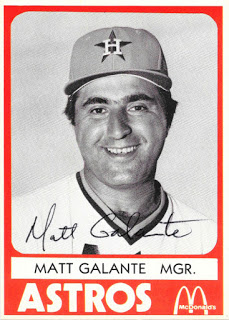 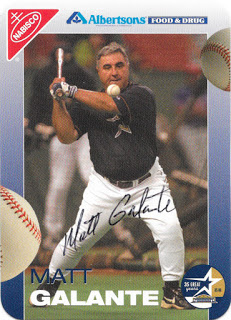 Matt Galante: 4/2, 826 days.
My favorite return from last month was one that I’d long written off as gone for good, which was a real shame. Matt Galante was another career minor leaguer, spending 8 years in the minors – six of it in the Yankees system and the final two with Milwaukee’s AAA club. In fact, Galante spent all or part of seven of his seasons at the AAA level. Matt is not a big man – his 5’6″ frame is probably partly to blame for him falling all the way to the 833rd and final pick of the 1966 draft.

After his playing career, Matt moved into scouting and coaching. He spent a great deal of time with the Astros as a manager in their minor league system before moving up to the big league staff, where he spent 1986-2001 (except for 1997) serving as the first base, third base, and bench coach. When Larry Dierker had his seizure in the dugout in 1999, Matt became acting manager for the next three weeks. He moved to the Mets for a few years in the early 00’s before coming back to the Astros in 2005, where he is still a scout.

The best part was that Matt not only signed these two great cards, but also that he responded to my letter – including an apology for the delay, as it had been misplaced at some point. Craig Biggio largely credits Galante with his transition to second base, a decision which was made at the beginning of Spring Training in 1992. That entire spring, they would be out at the field early and late as Galante hit countless buckets of fungoes to the All-Star catcher. Matt mentioned that Tim Bogar was the most underrated player he coached, saying “he was overlooked as a hitter but [was] an excellent defensive player.” His favorite guys in the game right now are Altuve, Harper, and Trout, and understandably his answer to my question of the “strangest thing [he’s] ever seen during his time in baseball was Larry Dierker having his seizure as Galante was talking to him in the dugout. I remember watching that game on TV, and as someone with epilepsy it’s always been a very raw memory from my childhood.

Bobby Brown: 5/4, 16 days.
The last return of the month was this one – which actually took two attempts. There are several variations of the address listed in SCN, which I didn’t bother to double check. My first letter came back RTS when I left the ‘e’ off of Clarke Avenue. Bobby Brown, “The Doctor,” is a Stanford/UCLA/Tulane alumnus who made a fine third baseman and just happened to luck into the playing for the Yankee dynasty of the mid-century. Brown appeared in and won four World Series titles during his eight-year career in the Bronx, and accumulating a superb .439 batting average across the 17 World Series games he played. The superb 1993 Upper Deck All-Time Heroes card, which draws its design from the old 1912 Hassan Triple Folders, is probably my favorite of the cards he signed, and it’s my second signed card from the set, the other being a Mazeroski. 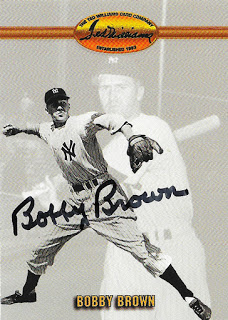 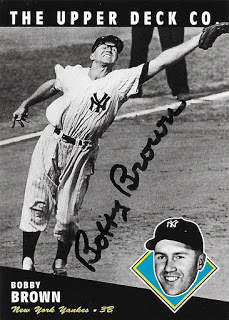 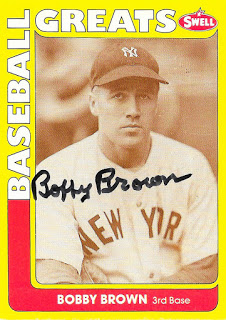 Bobby was famous for conducting his medical studies while playing for New York, eventually leaving baseball to go into medicine and practicing cardiology in the Dallas-Fort Worth area into the early ’80s. It was at that point that Brown returned to baseball, first serving as the Vice President of the Rangers before being elected as the sixth President of the American League in 1984. He replaced Lee MacPhail and held the position into 1994, when he was succeeded by Gene Budig. Because of his World Series prowess, his four titles, and his AL Presidency, Brown made it into several of the retired legends sets of the early 90’s, including the 1993 Ted Williams, 1994 Upper Deck All-Time Heroes, and 1991 Swell sets, all of which he signed for me. I’d pulled out the Swell card from the box I purchased and tracked down the others when I determined I could write him. I’m rather fond of the ’94 All-Time Heroes design as well, I may have to try and adapt that for some customs before too long. Mr. Brown also signed the protective piece of manilla folder which I’d tucked the cards into.
So November was not a bad month at all – three baseball lifers and a couple of new coach signatures for the Astro-graphs collection. When I did a quick check today, I happened to discover that I just crossed the 50% threshold for the all-time roster (with managers, coaches, and a few broadcasters on the list as well). I suppose it’s time that I started writing more requests!