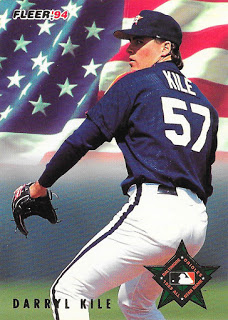 Merry Christmas, everyone! I hope you’re having an excellent day. For us, we’ll be hitting two of the three families today, with the third to follow on Christmas Day. With three sets of grandparents, the kiddo is certain to be loaded up with more gifts than we know what to do with, but I suppose that’s a fine problem to have. We’re fortunate to have everyone close enough for regular visits – and occasional babysitting.

Speaking of presents, I wound up pulling off a few more trades to close out the year – but first, there was a surprise package that arrived on Friday! These came from Chuck, aka C2Cigars over at TCDB. I was completely caught off guard with this one – while I’ve seen his handle around the site plenty and he has come across my trade radar through the “Recent Matches” tool, I’ve never actually traded with him. So when the rigid envelope showed up with his handle on the return address, I knew something was afoot. I checked to make certain that I hadn’t missed a trade proposal, but there was nothing to be found. Was there some Secret Santa thing I’d accidentally joined, and did I neglect to get cards for someone? Hmm, nope. I sent Chuck a message thanking him, and he replied that I needn’t send anything back his way (although I will, to be certain), but if I was so inclined, I might pay it forward, and he pointed me to a forum thread.

The first card in the package was this fabulously ‘Merican All-Star insert from 1994 Fleer, graced by DK himself. Kile is the lone Astro in the set as he was the sole representative for Houston in 1993. That means this fills out a team (insert) set! 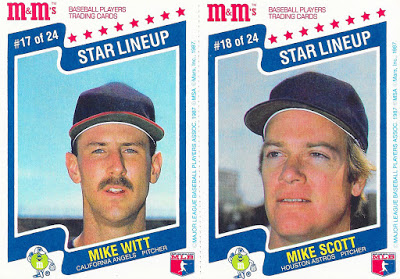 The next item was quite surprising indeed – a complete panel from the 1987 M&M’s set – and in fantastic shape! Mike Scott and Nolan Ryan are the two Astros in this 24 card set. I knew these were perforated on a side, but hadn’t realized they were released in two-card panels. This is most definitely cool. 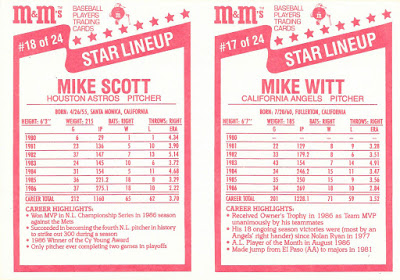 Here’s the back, for your viewing pleasure. You’ll note that these were not released under an MSA license or in conjunction with Topps, as they lack team logos.
While these two items were fantastic additions, it was the last piece in the envelope that really caught me off guard. 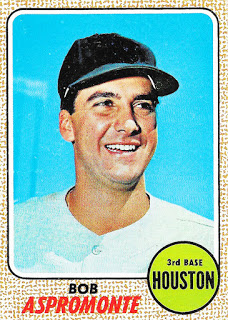 Um, what? Someone just sent me a pristine 1968 Bob Aspromonte out of the blue? For no good reason at all, other than to spread some cardboard joy? Well hot damn. That puts me in the giving mood for sure. Time to fill a few more envelopes before the year is out.

Many thanks, Chuck! I know you said nothing is needed, but I do believe I have a few Mets around here that you can use.

Here’s hoping Santa leaves something fun for all of you under the tree.

0 Replies to “Simply Having A Wonderful Christmastime”