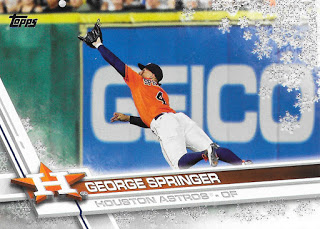 Well, sort of holiday. This trade came in the week before Thanksgiving, and while I’ve forgotten most of the details around it, that seemed like a good enough lead in to celebrate this 2017 George Springer holiday card, complete with the “metallic snowflakes.” It’s a beautiful photo of another acrobatic catch by Springer. It’s just too bad the design and snow take away so much of the photo. I’m happy to toss it in the team binders, though.

Anyhow, these cards came in from Kevin, aka KMack at TCDB. I’d sent a little pile of inserts from 2018 his way, and got a lovely little package of Astros in return. 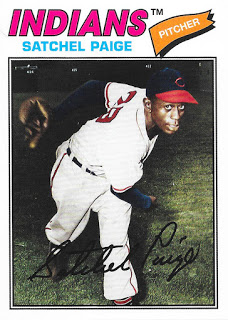 Oh, and there was also this Satch from 2018 Archives which I was missing. One of the few non-Astros cards I wanted from the set. 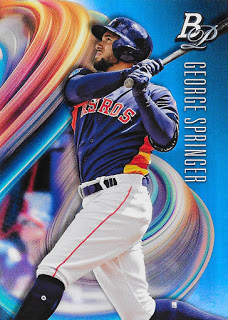 Kevin provided my second look at 2018 Bowman Platinum, and my first non-Prospect cards. The Springer is a Carolina Blue parallel, and boy does it sing. They should all be like that. 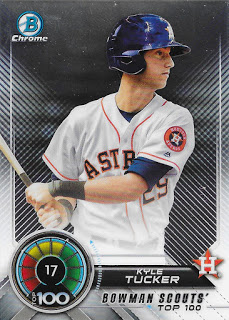 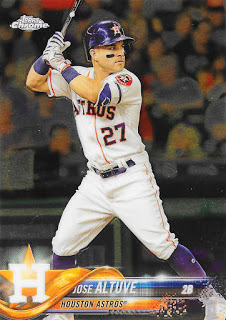 There were a couple chrome cards in the bunch, including a nice Kyle Tucker from 2018 Bowman. He struggled a bit in his brief call-up in 2018, but I believe he’ll be able to adjust. He does have that Ted Williams swing, hopefully he can make that Ted Williams contact as well. 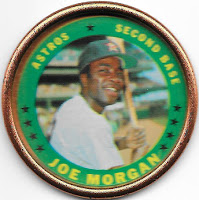 The coolest pickup in the trade, though, was this Joe Morgan coin from 1971 Topps. How can you not love it? I was more than happy to let a few nice inserts go knowing that this was coming back my way. What a beauty.

Thanks for the trade Kevin!