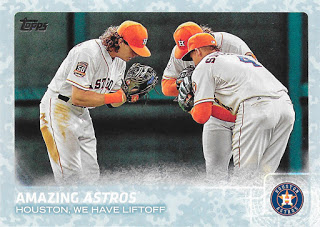 Back in September, a whopper of a package arrived from Bill, who goes by minibbcards over at TCDB. He’d sent me a few proposals, but we weren’t able to connect – my cards were mostly stored or I had only a few things available for him. Eventually, he sent me a message and said he had some stuff he wanted to send my way, no rush on a return, and no need to formalize it, just send along my address.
Well, I wasn’t about to say no. But, I made sure to start him a pile right away so I wouldn’t forget about it. That turned out to be a good idea, because this turned out to be quite an impressive package. I mean, I’m leading it off with a Snow Camo parallel from 2015 Topps, which is numbered to just 99 copies. Are you ready for takeoff? 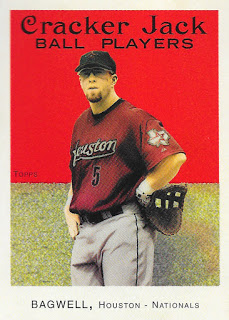 As you may have surmised by his trading handle, Bill’s collection is mini-centric. As such, I expected a few small-sized cards to show up in the package. This Bagwell from 2004 Cracker Jack was a fantastic discovery. 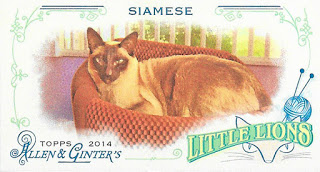 As was this Little Lions insert from 2014 A&G. I showed off one of the 2016 Ferocious Felines the other day, but I’m building this set as well. Cats are just my favorites. 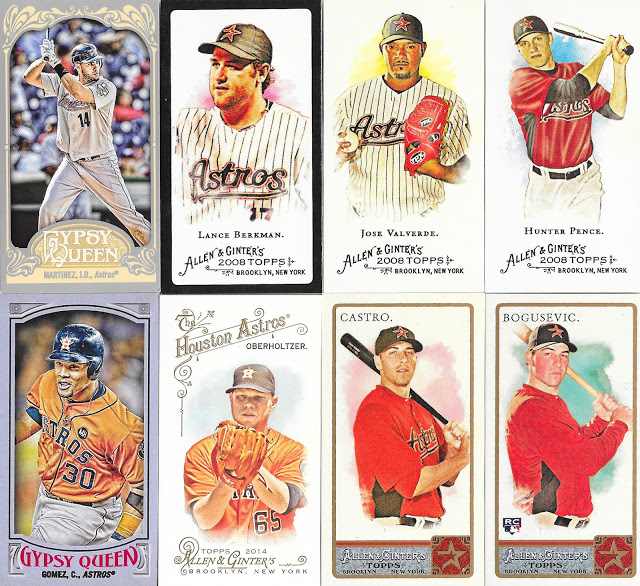 There were plenty of Astros tobacco-sized minis as well, including this lot. The Berkman is obviously a black border, but a few of these were A&G backs – I forget which ones at this point. All very fun additions.

There were plenty of other parallels as well, like these two Vintage Stock versions from 2017 Topps. I only wish Topps would just switch back to this as the standard for flagship. Heck, keep the old logo too.

I’m a true sucker for the framed Gyspy Queen parallels, and this trio knocked out my 2015 needs for the white frames. I love the rainbow unis on display here as well. 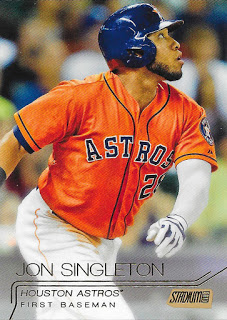 Another pair of parallels: 2015 Stadium Club Gold and 2016 Opening Day Blue right here. I get that Topps was shoehorning in the parallels with the smoke in 2016, but the only one that I think is actually really good is the Gold version. The black ones are neat as well. 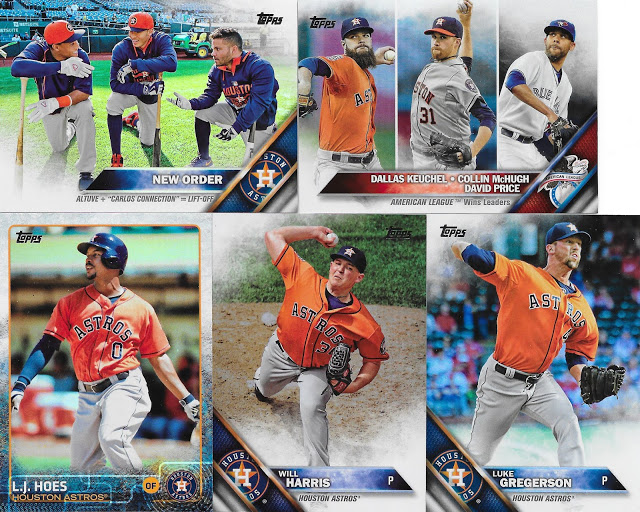 There was also a quintet of recent Rainbow Foil parallels awaiting me. Out of these, my favorite has to be the L.J. Hoes card. 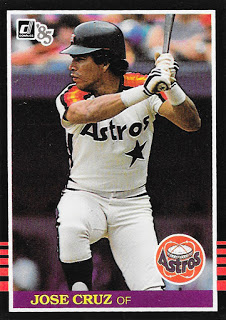 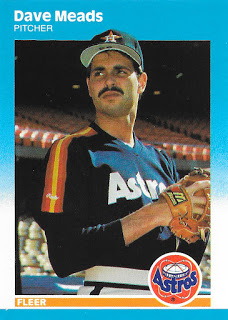 It wasn’t just new stuff in the package, either. There were some fun pre-2000s cards, like this ’85 Donruss of Cheo Cruz and a glossy Dave Meads from ’87 Fleer Update. 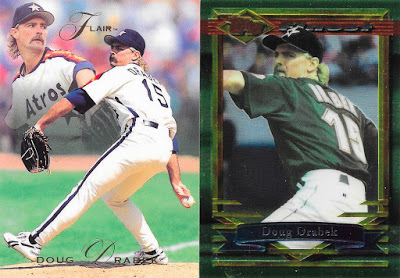 Some fun early fancy cards of Doug Drabek, mullet and ‘stache king of the rotation. 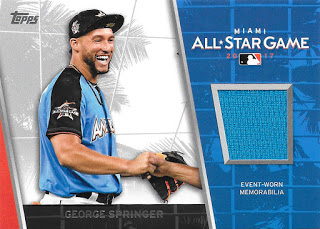 Oh, and then this surprise popped out! A bona-fide, “event-worn” relic card featuring a swatch of George’s All-Star warmup jersey. Well that is certainly cool!
But the fun doesn’t stop there. We’re just getting started. I told you it was a whopper of a package, after all… 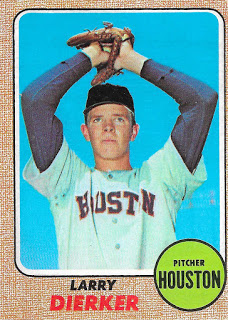 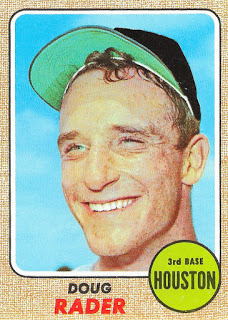 There was a nice little selection of vintage Astros tucked into the padded envelope to boot, including this pair of ’68 needs. Damn those blacked out caps, but these are a pair of beauties. 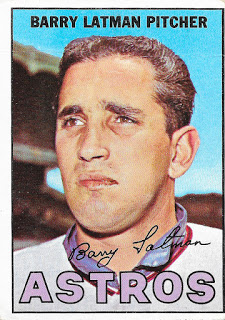 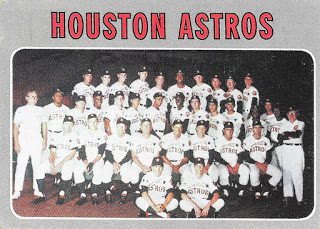 The team card from 1970 was another really nice addition, and makes me wonder if we’ll see true team cards like this in the upcoming Heritage set. And while Barry is clearly not in an Astros uniform on this 1967 (I’m fairly certain that’s an old Angels jersey), it definitely fills a hole in the binder. 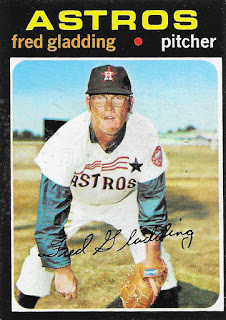 Denny is also featured in an old uniform here, shown sporting some old Atlanta digs thanks to the ongoing disagreement with Topps and the MLBPA. But thank goodness that Fred Gladding is suited up in some proper shooting star duds. Reading Ball Four last year gave me a new appreciation for Gladding.

The last portion of the package was the most mysterious, as it was wrapped in paper with this note written on the front. It felt like a pair of toploaders inside, but what might they hold? 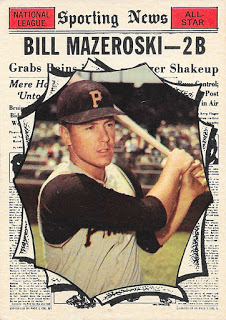 Hot damn! Bill knocked off one of my white whales with this 1961 Maz All-Star card, and it’s in phenomenal shape to boot! I was certainly not expecting this – though in hindsight I suppose the whale on the note should have clued me in that something special was inside.

Oh, and remember how I said it felt like a pair of toploaders?

Well, the last one is the true heavy hitter in the package.

Yessiree, Bill sent me a Joe Morgan rookie card to tackle my biggest 1965 need! What’s more, it’s in damn fine shape as well. This was most unexpected. I had just been musing about trying to find one of these at the next show when this package arrived, so it’s almost as if Bill read my mind.

Thanks again for the trade, Bill! I’ll take another look at your want lists soon and see if I can dig anything else up for you. I don’t think my package quite made up for the bevy of cards you sent.

3 Replies to “Trader’s Backlog: A Whale Of A Trade”