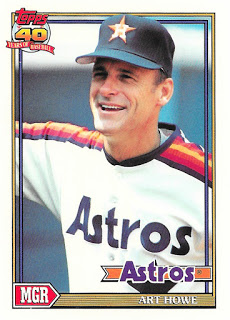 Just a short and sweet trade post here. I’m only going to show off a few of the cards, as I’ll showcase everything in an All Them Astros post at some point (if I can ever get around to writing more of those), but back in November I made a trade with Scott, who is bravefan1 over at TCDB, and sent him a healthy pile of Braves. In return, I picked up a full team set.

What? Oh, no, I’ve had the 1991 Topps Astros done and bindered for years at this point. And no, smiling Art Howe here is not coming to you from his former teammate Terry Puhl’s Canadian territory, either.

Rather, I picked up an entire Tiffany team set in one fell swoop! Howe’s about that?!? 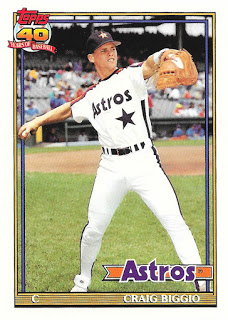 Like I said, I’ll run a full All Them Astros post at some point, but for now here are the two big highlights for me. I mean, this set is full of dudes that I was watching at the time I fell in love with the game, so the early 90’s Astros are all special to me.