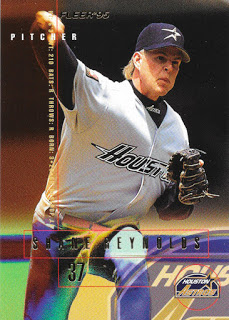 Oh man, I got ’95 Fleer-ed! You know what that means, right? Well if you’ve been paying attention in our little world, it means Robby T sent some cards my way! These showed up last week and really took me by surprise. Oh, and that reminds me – I have a few cards I need to send his direction.

Yes, there was indeed a healthy pile of Astros from the ’95 Fleer set. This Shane Reynolds was the only one I still needed – but I’m still one card short of the team set! BLAST! Upon opening the team back, I thought I might finally finish it off, but noooooo.

Anyhow, I’m a crazy person and actually like how the logo layer plays in the bottom corner of these. If you page these up right, the logo spans to the next card.

Phew, that’s enough of that, though. I’m probably giving Peter nightmares at this point. 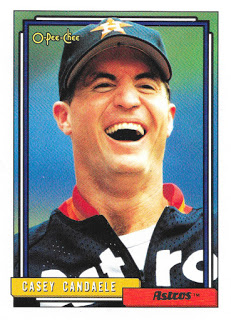 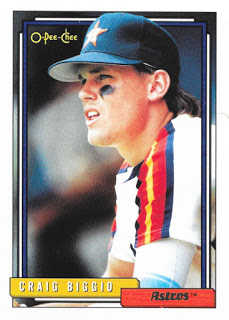 The most intriguing part of this package was a slab of ’92 O-Pee-Chee Astros cards. I had a couple of these already, but Robby did a real number on my needs with this package. Here’s two of my favorites. Is – is that a baby mullet on that young Biggio? I’m going to have to investigate this further. 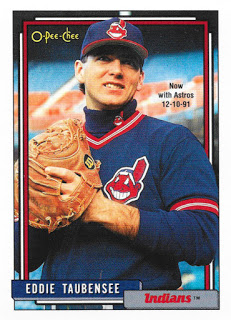 He even snuck in a pair of Sneaky ‘Stros! The Henry would technically be listed as a Reds card and miss my radar, but I’m also very happy to pick up this Eddie Taubensee “Now with Astros” card, even if it is at the expense of a very young and very talented Kenny Lofton. Sigh. 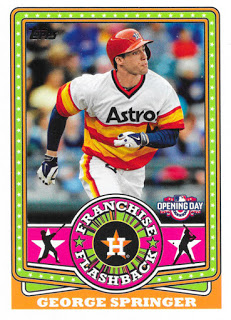 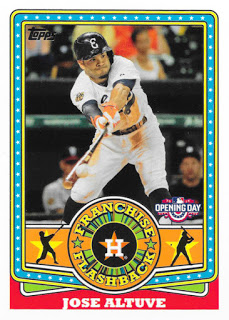 These two throwback uniform inserts from 2015 Opening Day were phenomenal. I’m particularly fond of Jose sporting the Houston Eagles duds. That was the Civil Rights Game in 2014, hosted by Houston. They played the Orioles, who wore old Baltimore Elite Giants uniforms. These were cool enough that I went out and bought an Eagles hat, which I still near daily. The Springer is actually a dupe for me, but I’m adding it to the pile of cards that I plan to give out at games this year. I’m sure it’ll make some little Astros fan in training very happy.

Finally, there was a little bit of 2018 Donruss in the package, highlighted by these two Holo Green parallels. I can definitely get behind these. I especially like the Altuve with the throwback ’84 design.

Thanks for the surprise, Robby!