by MarcPosted onApril 10, 2019July 8, 2019
I mentioned in my last post that Mark Armour had sent me some cards recently. We’ll get to that one soon, but first I need to post about the package which he sent me back in January. As someone who was baseball-starved at the time, this power-packed package was a welcome sight. 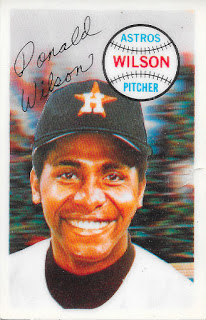 Mark is a fantastic person, and one of my favorite people on Twitter with whom to discuss baseball and cards. He’s the founder of the SABR BioProject, Co-Chair of the SABR Baseball Cards Committee (and the face behind their Twitter account), and shortly will be the next President of SABR. I can say that with confidence because not only is he a great person, but also he is running unopposed, so he’s a lock for the position.
Mark’s package wasted no time in getting right to the tasty portion: a 1970 Kellogg’s Don Wilson and a 1988 Nestle Nolan Ryan card provided some delicious food-issue treats to toss in the Astros binders. 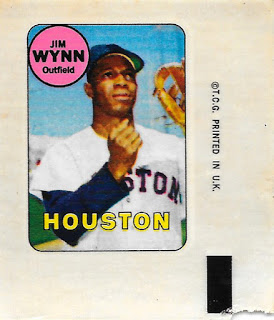 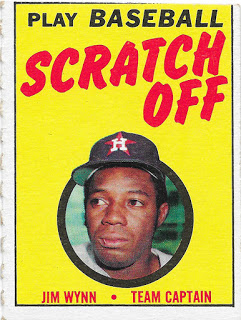 Among the other cards, however, was this delightful duo of inserts featuring the Toy Cannon. I checked and had a copy of the Scratch Off already, but my other copy was entirely scratched inside – this one was pristine! The 1969 decal was hands-down my favorite item in the envelope, though. I’d yet to see one in person. I mean, I’ve probably glanced over them in dealers cases at some show here or there, but I’d certainly never held one, much less owned an Astro. I was over the moon when it emerged from the package.

The last thing I wanted to highlight was another oddball item, from 2009 Heritage. No, it’s not a Matsui card, although yes, it is a Matsui card. But more importantly, this is an Astros card.

Ah, that’s better. One Houston Astros Ty Wigginton (error!) card! Oh, but wait – this isn’t a normal 2009 Heritage, no sir. Au contraire, it’s an advertising panel box topper. Now that’s a fun piece, even if it’s of a guy who only spent a season and a half with my favorite ballclub. Honestly, things like this fit into that category of “rare, so if I ever stumble across one I’m more than happy to own it.” Well I certainly am happy to own it!

Thanks for the stupendous package, Mark!

0 Replies to “A Most Delightful Surprise”