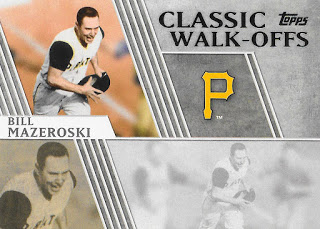 Back in February, I made a swap with one of my very first trading partners, Robert of $30 a Week Habit. Unlike our previous trades, this one was put together through TCDB. Robert is one of the handful of guys I know of who operate at TCDB and run a blog. Jason of Hoarding Cardboard is another, and Tony of Off Hiatus (who is back On Hiatus, but hopefully not for too much longer) are among the others that come to mind, although I know there are at least a few more.

At any rate, I was able to put together a nice little pile of cards for him, including some set help for 1972 and 1979 Topps, 1989 Upper Deck, as well as 2018 Ginter. He’d seen that I was pretty active in getting cards out, so he shot a small proposal my way, which I promptly blew up. My MO for the past year or so has been “move that cardboard!” In fact, I just put together an absolute whopper of a trade over at TCDB that will clear out just about a full box worth of cards.

But I digress. Robert sent me some lovely cards, so let’s talk about those. They included a Mazeroski for my PC – and if you think the triple photo on the front is a lot, well you should see the modern pages in the Maz PC. Understandably, this photo (or one of the three other angles of this moment) get used a lot. 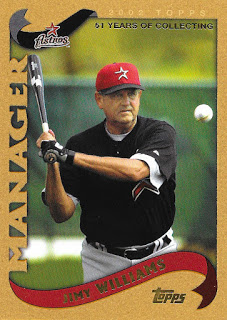 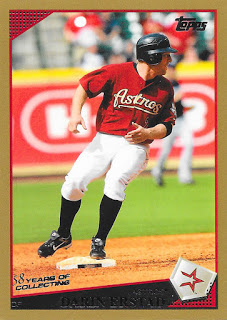 One thing that was in abundance in this trade was parallels. These two golden bordered beauties provided some entries where the parallel universe is pretty scarce: 2002 Topps (this is from the Traded set, but I think I only had one other from normal flagship) and 2009 Topps. The 2002 is nice because the border is actually sparkly, and the serial numbering is from when they still used foil stamping. 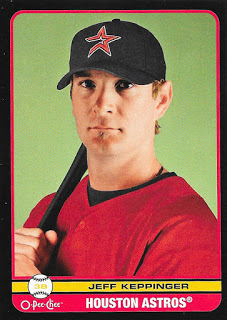 These were among my favorites in the package. The 2009 O-Pee-Chee set (put out by Upper Deck, which is weird enough on its own) is a very nice simple design, the sort of thing you would expect to see if Heritage was not rehashing the old catalogue, but rather reinventing cards from the period. These beautiful black bordered parallels are even better. I’d take 200 copies of that team checklist if I could find them. 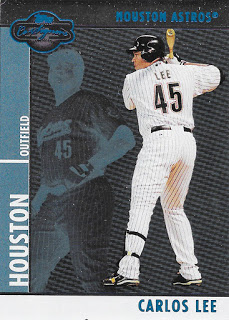 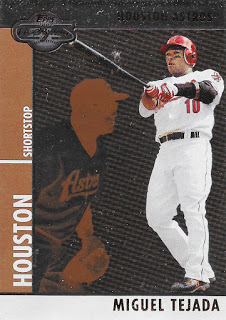 These two cards from 2008 Topps Co-Signers are parallels as well, a Blue and a Bronze version. Were it not for TCDB, I would never know things like this, as this is from my lost years. They are serial-numbered, however (250 and 300, respectively), so perhaps I would have deduced it eventually. 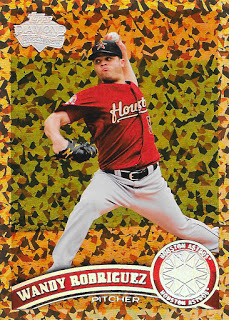 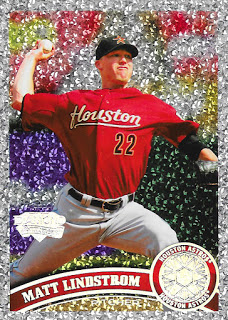 These, of course, are much easier to spot. They’re also some of my favorite parallels that Topps has made in the modern era (the 2014 Topps Chrome Orange refractors are also high on the list). Of course, the team was absolute trash at this point, so there’s not much in the way of notable guys to pick up. It’s nice to get a Cognac parallel of Wandy, though. 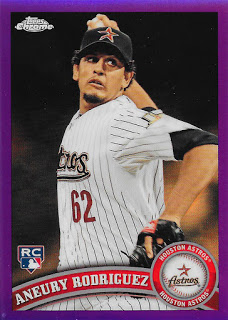 I told you, this trade was essentially parallel madness. There were a handful of non-parallels in the package, but apparently I didn’t bother to scan those. These sparkly gold parallels look better in hand than the scans would lead you to believe. 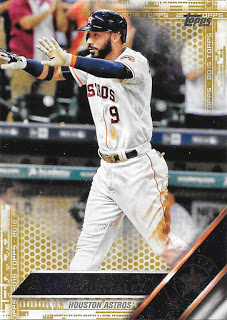 It’s kinda crazy that these two guys are gone. I understand the team’s decision in not bringing either of them back, but it’s still somewhat bizarre. What’s even crazier, however, is that Keuchel is still without a team. He’s not an ace anymore, but he’s easily an upgrade over the third or fourth guy in about two-thirds of the rotations out there. I feel for the guy. Marwin, meanwhile, went deep for the first time as a Twin yesterday, taking former teammate #Kenneth Giles deep to dead center. 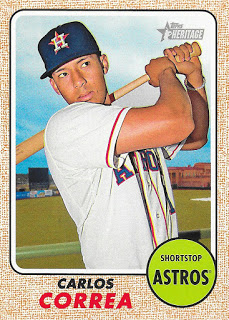 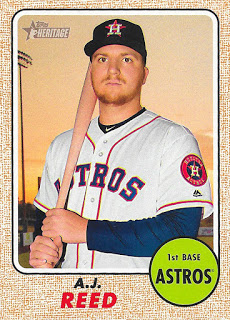 Ok, see! It wasn’t all parallels here. These two from 2017 Heritage High Numbers brought me a tad closer to the team set. I was trying to figure out why Reed looks so strange here and just noticed that his hands are reversed on the bat. 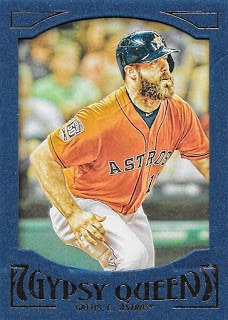 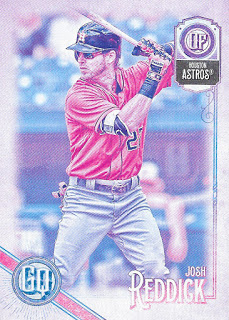 Alright, that was a nice palate cleanser, but let’s get back to those juicy parallels. The 2016 GQ blue frames are among my favorites. I haven’t thrown up a want list yet, but I’ve been working on that set as well. The Reddick is one of those silly non-blackplate variations. 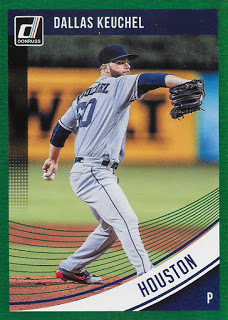 This last pair is from 2018 Donruss and Donruss Optic. That’s a Holo Green Keuchel, and those are pretty slick looking. The Correa is a Pink parallel, although my Purple copy looks surprisingly similar (there is juuuuuuuust enough difference in the hue that it doesn’t look like a simple ink supply difference). I should have another version coming in this week from yet another TCDB trade as well. 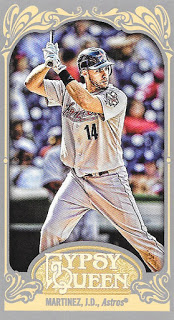 The last puppy I wanted to show off was my other favorite card in the trade, a lovely 2012 Gypsy Queen mini of J.D. Martinez. This is a Straight Cut parallel, so you get to see the back as well. Nick V. will get a kick out of the lack of non-tobacco tobacco reference.
Thanks again for the swap, Robert! I need to dig around and see if I have any more of those ’89 Upper Deck cards on your list.