Opening Day may be well behind us at this point, but I still haven’t finished my 2019 Opening Day team set – or many other years, for that matter. However, I can count myself a few cards closer thanks to a quick swap with Jenny!

She’d mentioned a pair of Mascots that she still needed from the set, one of which being Dinger of the Rockies, and I knew I had pulled one. So I reached out and offered to send it her way. I packaged it up with a few other Twins, and while I didn’t need anything in return, she asked what she could send my way. 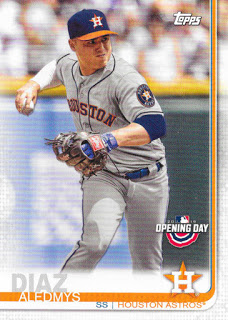 Well, I always need new Astros cards! This is even better, since I don’t really like to resort to buying Opening Day in order to fill out team sets. It’s, well, a cheap rehashing of Flagship. It could be so much better, but it’s just not. And I understand it’s purpose in our collecting world, but I just wish Topps would punt this one and focus on other kid-oriented sets.
I’m still happy to add these Astros to the binders, though! That’s our first look at Almedys Díaz in an Astros uniform. Or at least, that’s what Topps wants you to believe, but that is almost certainly a photoshopped picture of him with Toronto. The letters are too small on the jersey, and the blue batting glove is another clue. Also, he’s wearing a road jersey, but that’s a photo of him IN MINUTE MAID PARK if I’m not mistaken, which is just reallllly trippy when you think about it. Either they shopped him into MMP or purposely picked a photo of him in MMP to airbrush. 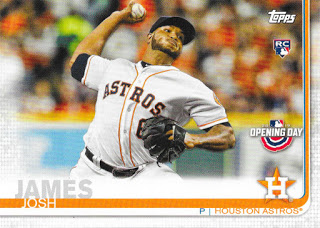 This was my favorite card in the envelope, though – Josh Flames! He’s fun to watch, and I’m excited about him being on the roster for a full year.
Thanks for the quick swap, Jenny! And for the rest of you about to ask – I think I’ve already sewn up this team set via some incoming TCDB trades. It’s about time to update the ol’ want list.