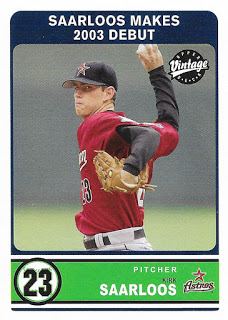 Yesterday’s post was about Colbey’s recent “free Twitter break” that I jumped into. That was a few weeks back, but I still owe a post about my cards from his previous Affordable Group Break back in June, when he busted some 2003 Upper Deck 40-Man and 2002 Upper Deck Diamond Connection.

So what’s this 2003 Upper Deck Vintage card of Kirk Saarloos doing here at the top of the post?  Was it part of some throw-in bonus pack?

Nope. In a most confusing move, these “high numbers” from 2003 UD Vintage were seeded in the 40-Man packs – one to a pack if I recall correctly. It really threw me for a loop when I was entering my new cards into the database. Unlike the 40-Man cards, they are not glossy. 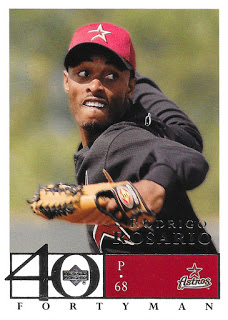 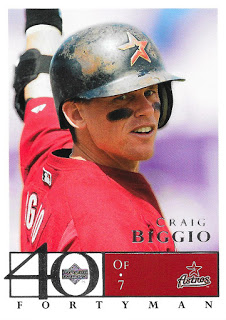 All told, I netted several new cards for my team set build – which in a set like 40-Man is sizeable. Rodrigo Rosario was the hot Astros prospect at the time, cardboard-wise. The Biggio was new to me, and I love how much grit his helmet picked up over the season. 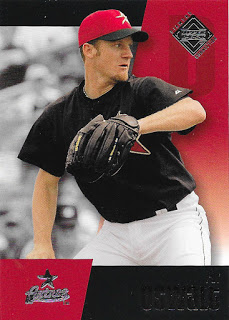 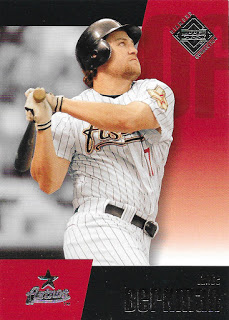 I believe this break knocked out the rest of my 2002 Diamond Connection needs, but I’d have to go back and check.

Ok, they knocked out my base needs – sort of. The rest of the “base” cards are some serial numbered rookies and a handful of star relic cards. That’s Roy Oswalt and Lance Berkman, in case you didn’t recognize them – the foil on these is in a black box, so it’s nigh unreadable in a scan. 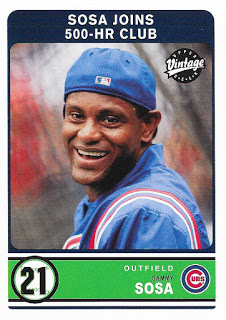 I’d bought one slot in the break, the Astros, and my randomized team turned out to be the Expos. Since the break didn’t fill out and Colbey was about to be stuck with six extra slots, I offered to buy another one of the pairings the randomizer had put together, grabbing the Rangers and Cubs. Here are two of the UD Vintage highlight cards that netted me. 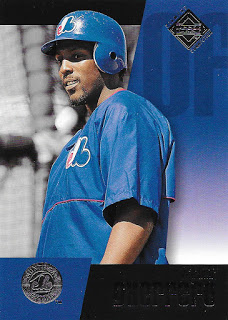 I got an early Vlad card out of it too. Thanks randomizer! 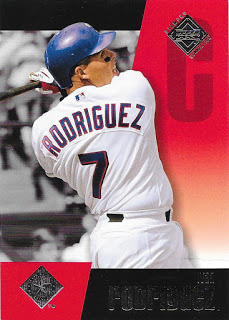 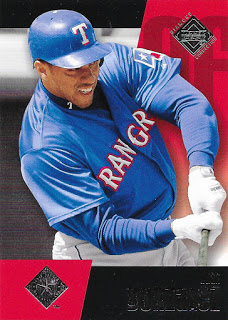 I’d grabbed the Rangers because there were a few PC guys in the bunch, since Diamond Connection has all those relics, I thought maybe I just might get lucky. Well, I didn’t have any relic luck, but Pudge and Juan Gone here have jumped into their PC slots. 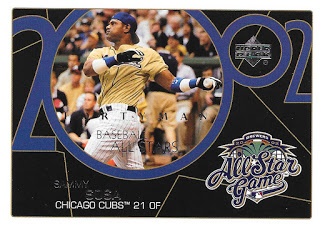 I’m not a big Slammin’ Sammy guy, but I thought the All-Star inserts from 40-Man were pretty neat. This one is clearly a Home Run Derby shot. 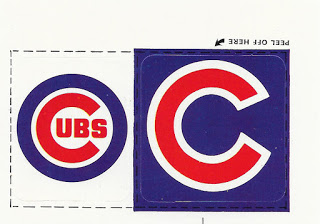 As any good group break host will do, Colbey threw in a few extra packs. This was from the 1981 Fleer Team Logo Stickers pack he ripped. While these are fun and all – 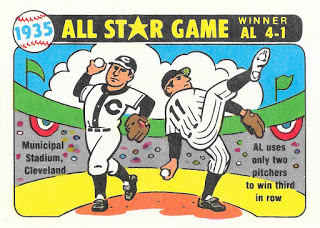 – it’s the backs that really shine. I love that old Laughlin All-Star Game artwork on these, and I would definitely consider building the set. I’m hanging onto this for sure. 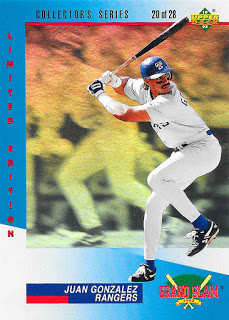 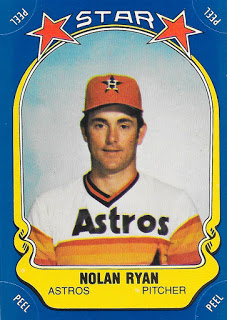 My two favorite cards of the break also came out of bonus packs. Colbey had practically tripped over a stack of 1993 Denny’s Hologram packs when purchasing the boxes for this break, and while I’d love to build the set, for now I’m happy to have this Juan Gone for my PC. The Nolan Ryan comes from the 1981 Fleer Star Stickers set, and just so happened to complete my team needs. So I’ll need to draft another All Them Astros post to cover it.

Thanks again for hosting another great break, Colbey!