by MarcPosted onJuly 23, 2015July 14, 2019
Ok, so this mail day happened last week, but it was still, most certainly terrific! Two eBay packages, a big trade package from Kerry at Cards on Cards that’ll need to be saved for another post, and a sweet little autograph swap that netted me a few more Astro-graphs. Oh, and that’s not all – there was a great TTM return as well! 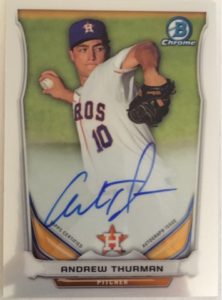 Let’s start with the Catch(es) O’ the Bay.First off, there was an unexpectedly long-distance purchase. I threw in a cheap bid on the next card you’ll see, and then found out I won it. So, I went to check the total with shipping, and realized it was so cheap because it was shipping from Korea. That meant that in order to make it worth it, I needed to check for some more cards from the same seller. That netted me another almost-Astro autograph: this Bowman Chrome of  Andrew Thurman, whom we flipped to the Braves in the Evan Gattis deal.

It’s cool, and it was cheap, and took my average card price down, but it wasn’t the real piece in the deal that I was excited about. 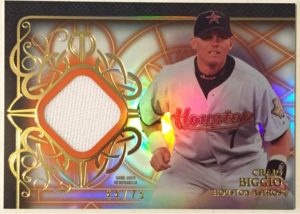 That would be this one. An orange parallel jersey relic from 2015 Topps Museum Collection featuring soon-to-be inducted Hall of Famer, Craig Biggio. This sweet puppy is numbered 44/75, and I won the auction for a solitary dollar. Now, shipping was six, but that doesn’t matter.

By the way, I’ll be in Cooperstown this weekend to see Biggio inducted, because my wife is super amazing and knows (1) I need a vacation (2) that she needs one (3) that we both enjoy the base ball, and (4) that she can score a trip to New York City out of the deal. Basically, my wife is fantastic because she’s going to let me totally nerd out for a few days in exchange for some nice dinners.

I saw Nolan inducted in 1999 (a true tale for another series of posts), this weekend I’ll watch as Biggio goes in, and then god-willing I’ll get to see Bagwell go in soon. 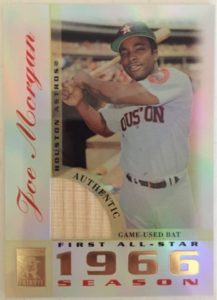 Speaking of the Hall, my other eBay purchase (also cheap!) was another relic from an Astro HOFer. This Joe Morgan bat relic comes from Topps Tribute, when it was a really cool set in the early 2000s. Now, it’s a bit bloated, but there are some super-fantastic cards in those early sets.I love this card, it’s nice and shiny and has a great photo. Bat cards, by the way, are certainly superior to jersey cards. For those of you who think the photo looks familiar, it’s the same one they used for his card in Archives this year.

Ok, as I said, there was a very generous load of cards dumped on me by Kerry. That package deserves its own couple of posts, but I certainly want to acknowledge it here and now, in case I don’t have any time to post about it for a few days.

There was another, smaller trade package, though. Many of you are familiar with my TTM endeavors, and for a large percentage of my addresses I utilize the fantastic source, sportscollectors.net.

Well, SC.net has some pretty cool features, including want lists and a built-in transaction feature, among other things. I took the leap recently and completed my first trade on the site, swapping a handful of guys who I had dupes of from my old autograph hunting days, and picking up a few more Astros for my All-Time roster. 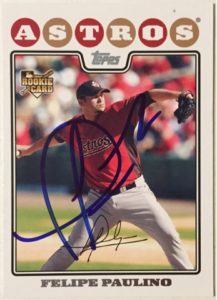 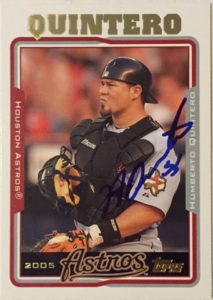 Meet Carlos Hernandez, Felipe Paulino, and Humberto Quintero! They are happy additions to the family. 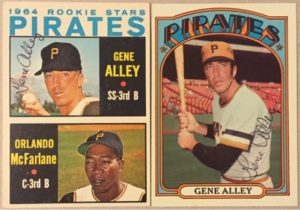 But wait, there’s more! I got a TTM as well. I know the ‘Bucco bloggers out there are gonna love this one. It’s none other than Gene Alley, the shortstop in one of the best double-play duos in all of baseball: that of he and Bill Mazeroski.Gene was kind enough to answer a few of my questions as well. Thanks Gene! These are fantastic.

Ok, gotta throw the last of my stuff in my bag, and off to Cooperstown! So long!