I’ve had several nice streaks of TTM returns so far in 2014. These latest several have brought me to a total of sixteen successes out of the forty-nine I mailed throughout the month of January. That’s just under a third of them.

Friday brought in a pair of football-related returns, both a little surprising in their own way. 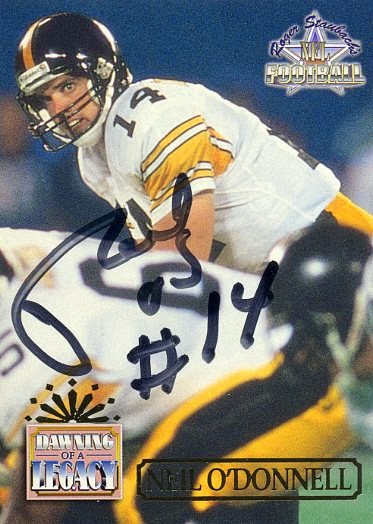 First, the unfortunate one: Neil O’Donnell. I was a bit disappointed when I ripped an envelope open and discovered this inside. Why, you might ask? Well, I didn’t send Neil this card. Not even close. I sent a rather nice looking 1995 Playoff Contenders card that I was hoping would look pretty cool when signed, even if that signature is completely illegible. Ah, well. This return took nine days. 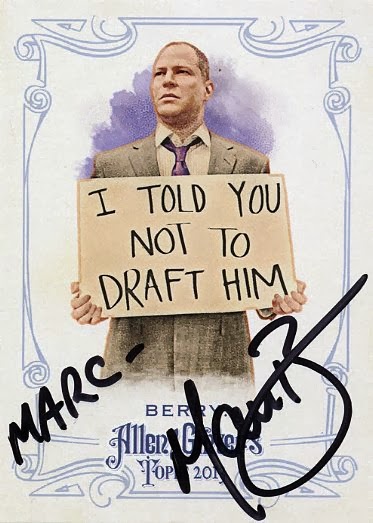 On the other hand, not only did I receive back my 2013 A&G card of fantasy football guru Matthew Berry signed, but also he chose to sign the letter I wrote him and return that as well. That means he (probably) read it and thus would have discovered how his advice led me to the finals of my first fantasy football season – which I then lost to my wife. Here’s hoping he actually read that story. Berry’s card came back in 21 days.
Saturday brought two returns as well. First off was an addition to the Astros Autographs project, Chris Donnels. Chris signed all four of the cards I sent, as well as a brief, mildly humorous reply to a question I asked about his ball-playing experience in Japan. 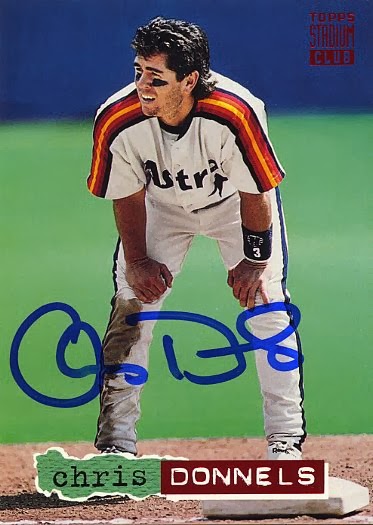 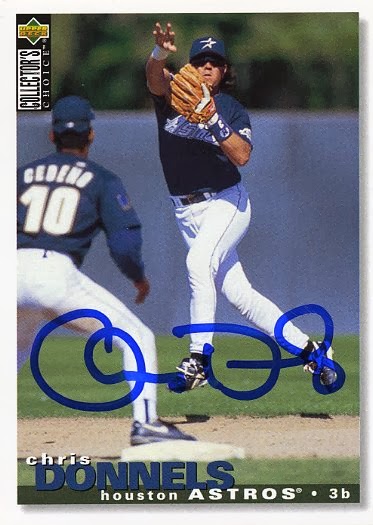 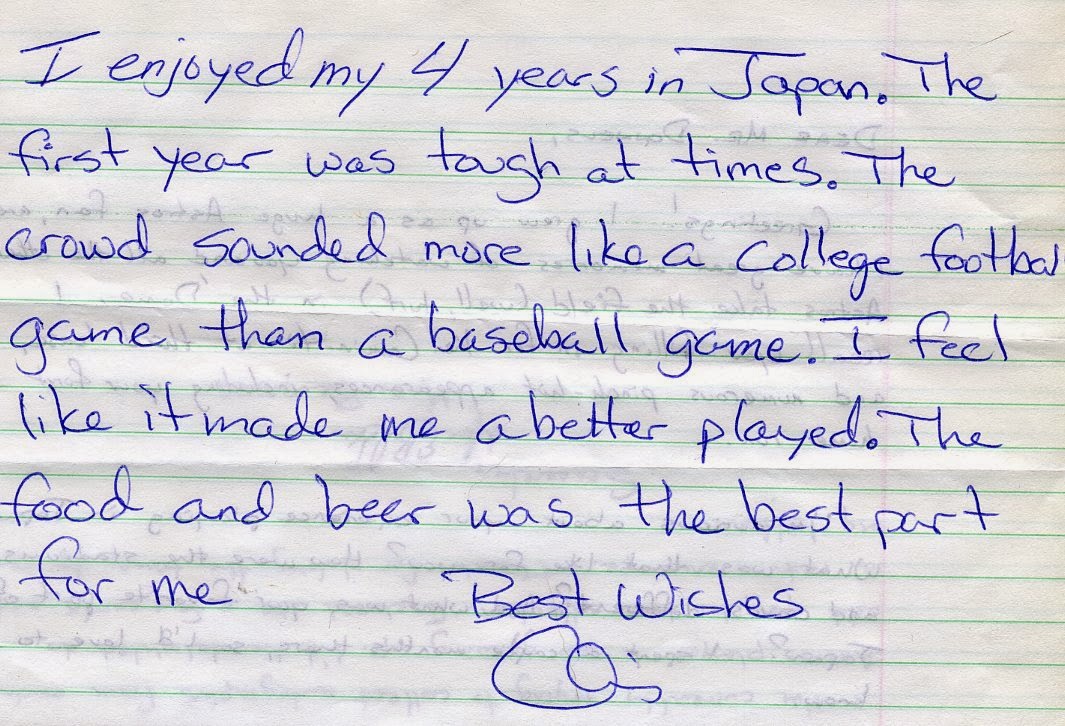 I enjoyed my 4 years in Japan. The first year was tough at times. The crowd sounded more like a college football game than a baseball game. I feel like it made me a better played (sic). The food and beer was the best part for me. Best Wishes, Chris.

You’ll have to stick around for the end of the post to catch the second return from Saturday, because it’s my favorite of the week. 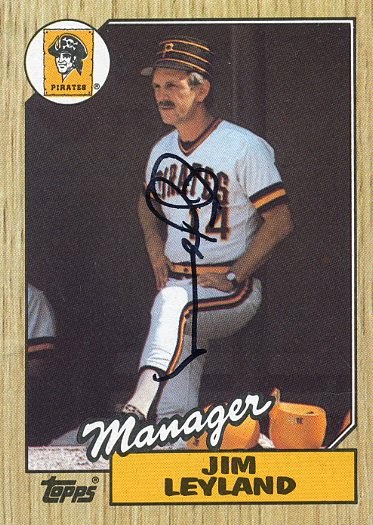 Monday’s mail revealed a signed “rookie card” of Jim Leyland, whom I’ll always remember from his years guiding the Buccos from the ‘Burgh. Yes, this ’87 Topps is considered Jim’s first card, and yes, he returns items with that vertical signature. The other two cards I sent came back unsigned.

Today brought back two more Astros, Karl “Tuffy” Rhodes and Doug Rader. Both of these replace rare instances where I bought an autographed card at a show without any sort of verification other than its presence in a binder full of supposedly authentic auto’d cards. Fortunately they both seem to confirm that the ones in my collection are authentic.
Rhodes forewent signing his first name on the cramped trio card, but his signature looks a little cramped on those other two anyway. I liked watching him play, but we shipped him off to the Cubs. 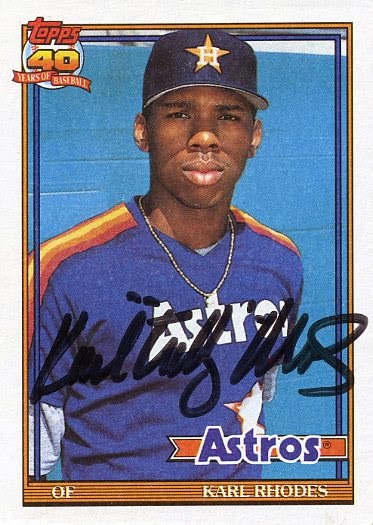 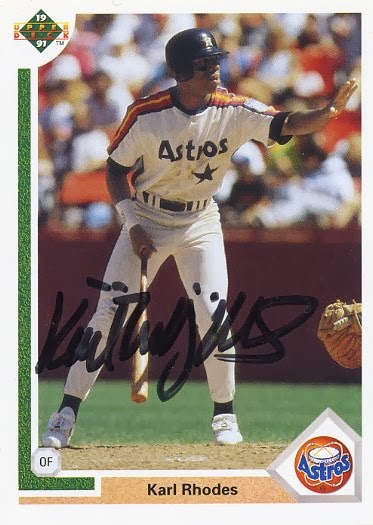 Doug, nicknamed the “Red Rooster” for his red hair, was a scrappy third baseman for us in the late sixties and seventies, winning four straight Gold Gloves at third. Unfortunately his bat couldn’t keep up with his defense, and we sent him off to the Padres before the 1976 season. For some reason, Doug decided to sign directly over the wonderful Topps signature on his ’75 card, but I think that ’76 SSPC is just dandy. 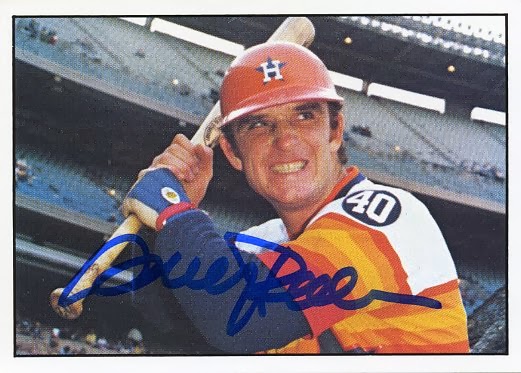 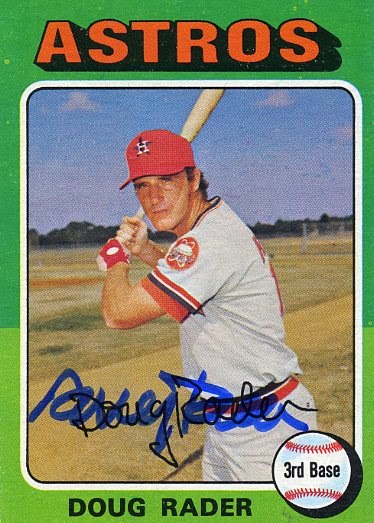 So who came in on Saturday? Well, it’s none other than legendary Pirate shortstop Dick Groat! Dick was the MVP in 1960, and along with Roberto Clemente gave the Pirates two big bats that raked in the early sixties. This beauty makes up for my only other Groat autograph, which features him in a dreadful Phillies uniform.

That’s it for now. I need to write some letters for Spring Training and I’ve still got to show off how generous P-Town Tom’s massive trade box was.

0 Replies to “Another Streak Of Ink”