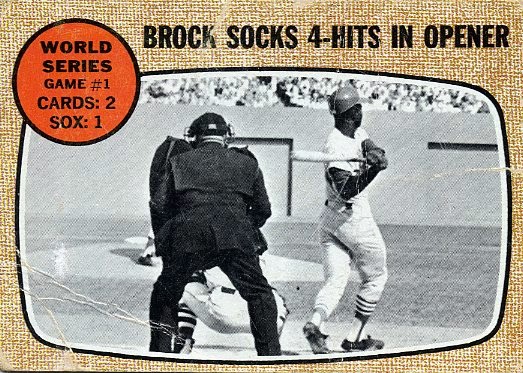 Well, I’ve made my way through the string of boxes I bought this weekend, adding all of the cards to my cataloged collection over at Trading Card Database, and finding quite a few surprises.

The biggest one came today as I entered the 1974 partial set, Traded set, and duplicates, because I found a stack of cards that wasn’t even marked on the boxes! Stumbling across a 165 card stack of 1979 Topps is just fine by me, even if most of it was just commons. 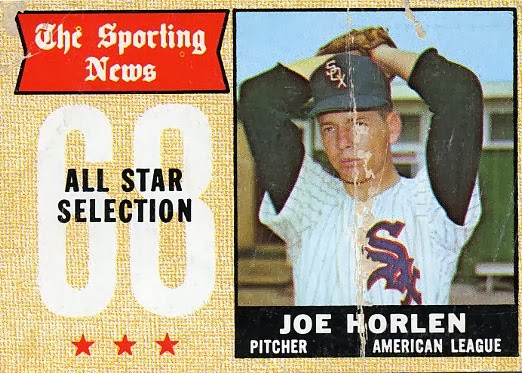 The resounding result from this experience is that it’ll probably drastically shift my set building. I know I’ve only got three more cards until I finish 1989 Topps, but I picked up an astounding 624 of the 660 cards in 1974 Topps, plus the full traded set. Oh, and then there’s the massive amount of duplicates.

It’s hard to figure out what set to examine here first, so let’s just start with the smallest of the stacks I got: 1968 Topps. They’re not in the prettiest condition, but the design is stellar.

The Lou Brock World Series card up there is probably the highlight of the bunch. Joe Horlen gets his own spotlight not for his All-Star selection, but rather because I said yesterday that there were 28 cards from this set in the box. As it turns out, Mr. Horlen was unceremoniously being used as a set divider, hence the atrocious fold. Joe threw a no-hitter against the Tigers near the end of 1967. He didn’t make it into the All-Star game, and he wound up second in the Cy Young voting to Jim Lonborg after posting a 19-7 record with a 2.06 ERA, 6 shutouts, and just 2.02 walks per 9 innings.

Let’s take a look at the other names here. Tom Phoebus was named the Sporting News ROY in 1967 and threw a no-hitter against the Red Sox in 1968. Jimmie Hall hit 33 home runs in his 1963 rookie season. Bob “Rabbit” Saverine has the distinction of going 0-12 in a doubleheader against Baltimore in 1966, setting an American League record. 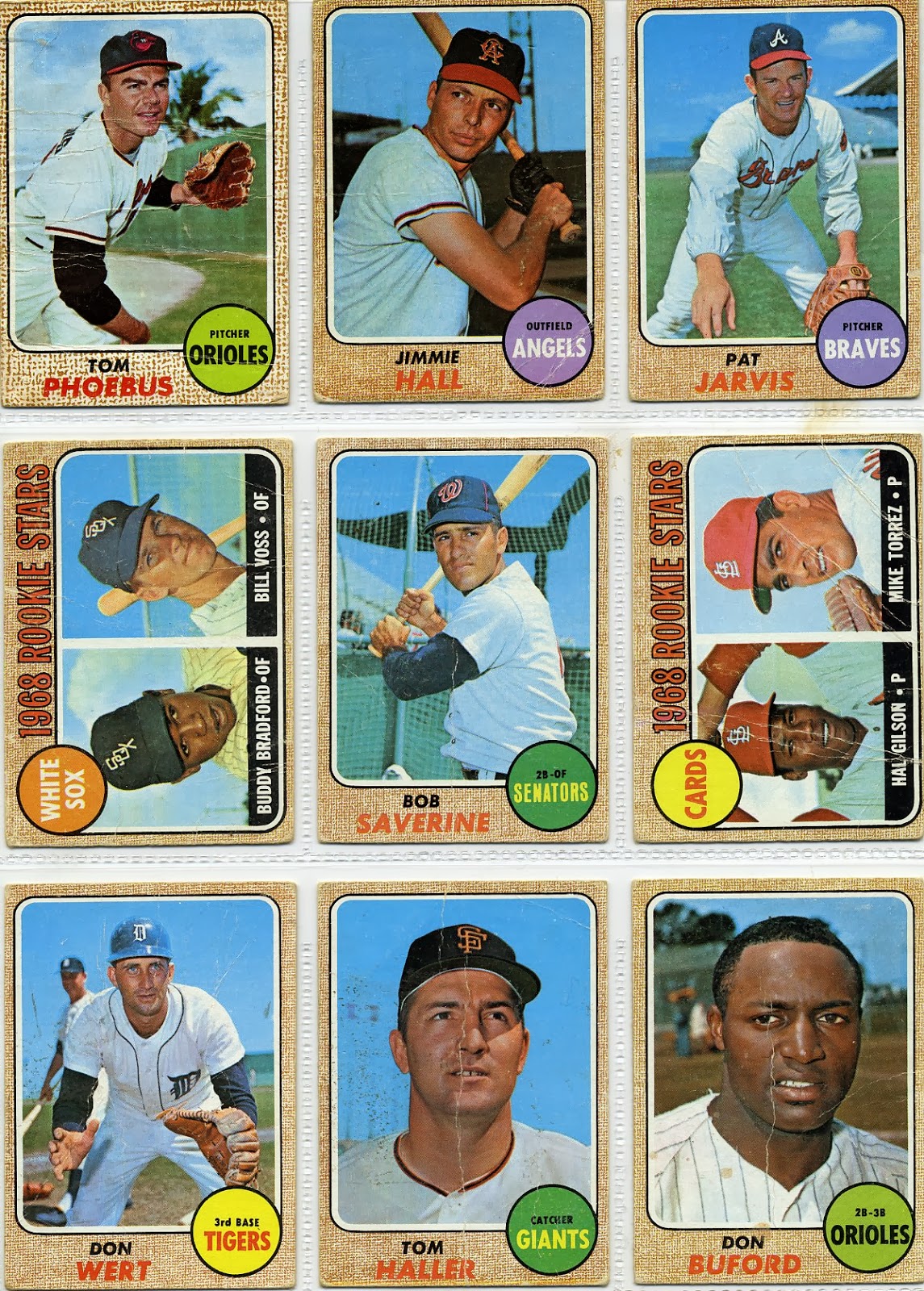 Hal Gilson only played one year in the majors. He faced Ernie Banks as his first batter Banks reached on an error, and was traded to Houston in mid-season, playing in two games for the Astros. Mike Torrez is noted for ruining the career of one of Houston’s best young players, the until-then incredible Dickie Thon, who many thought had Hall of Fame potential. Don Wert was a slick-fielding third baseman who’s hitting was derailed when he was beaned, his helmet shattering, in 1968.
Greg Goossen has the distinction of being Gene Hackman’s official stand-in. Johnstone is a noted prankster and appears in the film Naked Gun. Mike McCormick won the NL Cy Young in 1967, while Tommy Helms was the 1966 NL ROY. 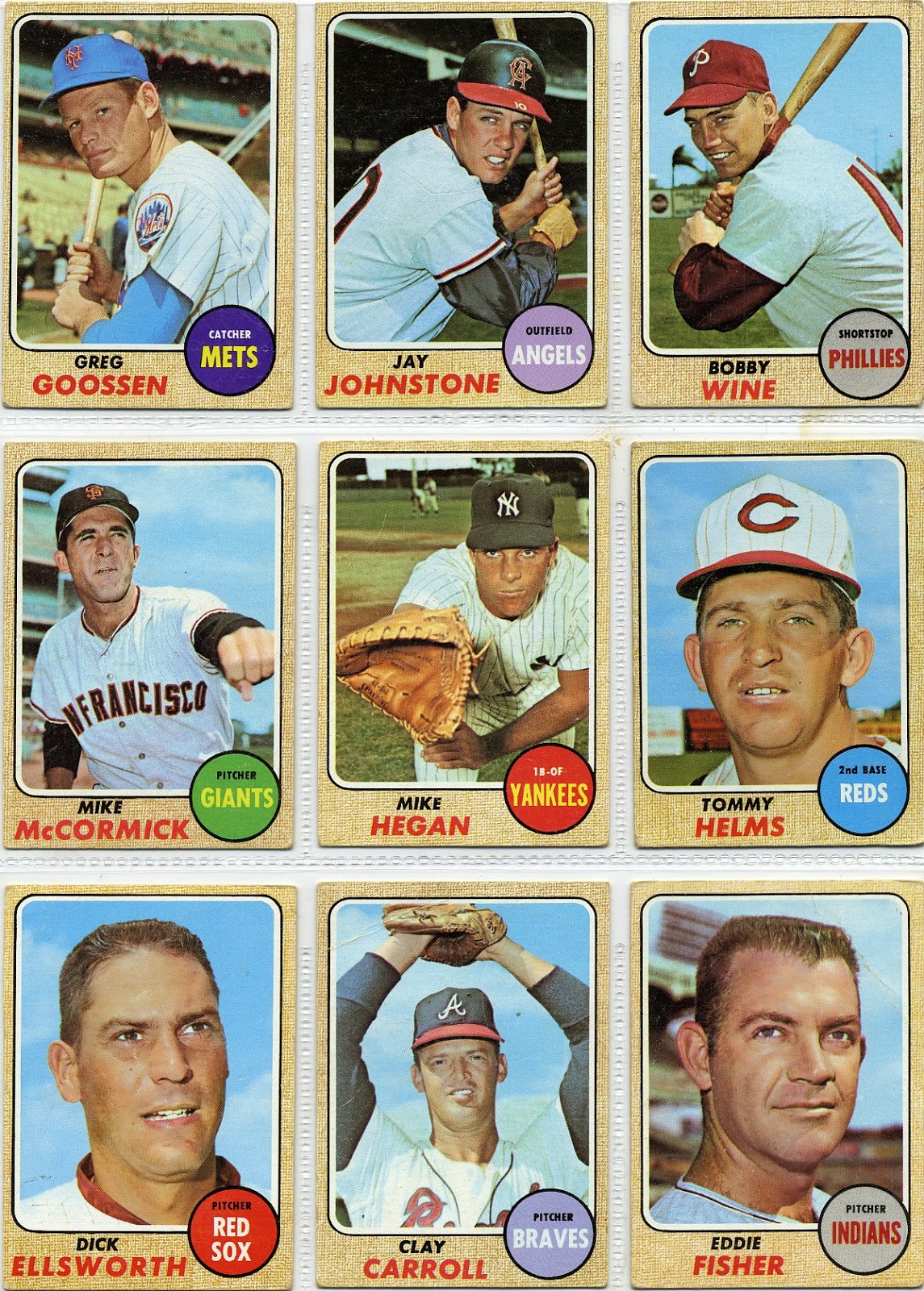 Eddie Fisher was a knuckleballer, and for a few years the White Sox had both him and Hoyt Wilhelm on staff.
Don Cardwell threw a no-hitter in 1960. Jim Lefebvre was the 1965 NL ROY. 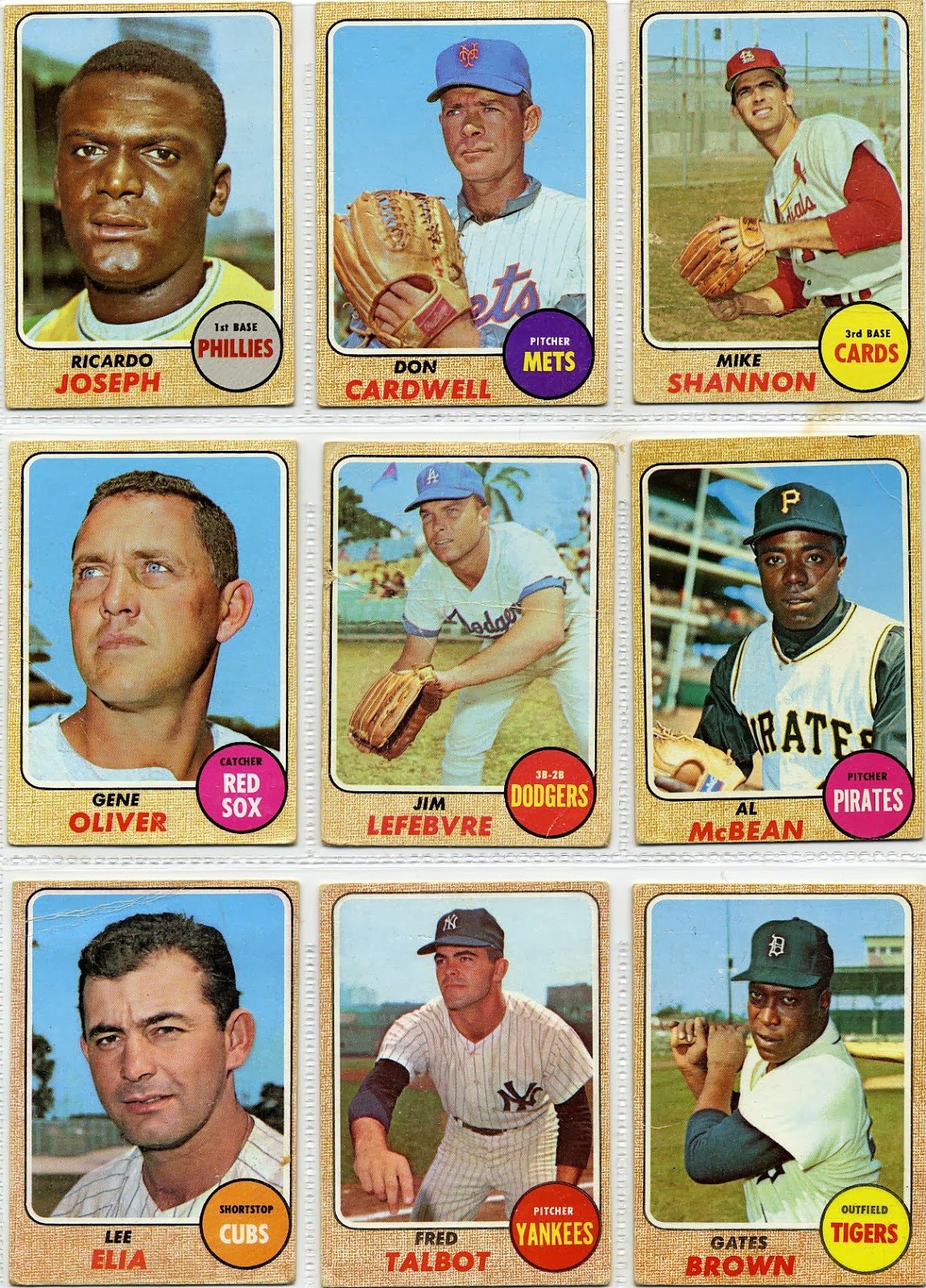 Finally we have Lee Elia, who of course is noted for his infamous rant while managing the Cubs in 1983. I think I may have to send that one off to Elia for a signature.
Alright, that’s going to end it for me tonight. There’s plenty more to come from the boxes, I just have to figure out what to post next!