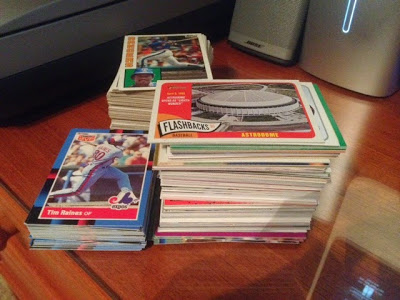 So in my busyness and absentia, I’ve neglected to talk about two massive trades that went down in the Domeland.

This first massive package came back from Pat at Hot Corner Cards. I recall sending him some nice vintage Tigers and other Motor City Kitties from the mid-90s, and was pretty excited to see what came back in return. He promised some stacks for the junk wax sets I’ve been working on as well as some Astros.

What showed up in the mailbox was certainly more than that. Look at those stacks! Pat blew me away with this package. As far as this trading relationship goes, I’m definitely the one who needs to step up to the plate now. 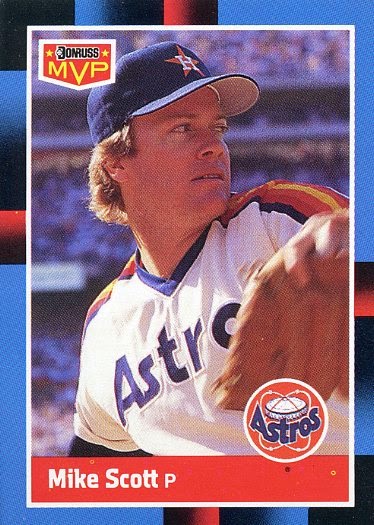 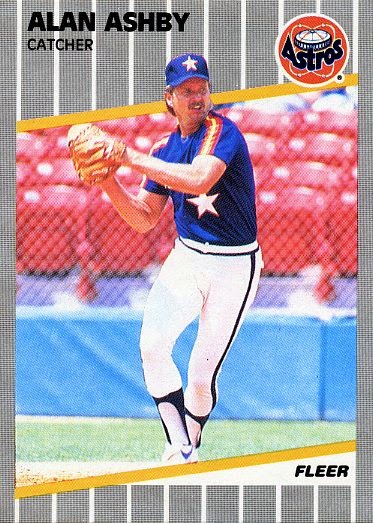 Chief among the ’88 Donruss stack were some of the Bonus MVP’s, including this great Mike Scott. I also love this wonderful Alan Ashby card because of the rarity of a catcher photo like this, which is clearly from practice. If the empty chairs didn’t already say that, the hat and lack of pads ought to give it away. 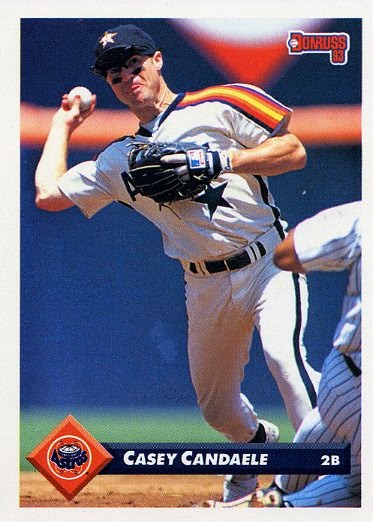 After those 80’s stars, here are two of my favorite ‘Stros from the 90’s – Cammy was a fantastic third baseman, and I wish he’d played his entire career in Houston. Casey was a utility player who I thought the world of for some reason, and still do. It had to be some Eckstein-ish grit or something like that. 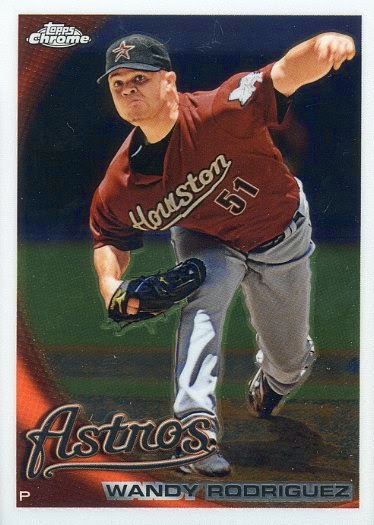 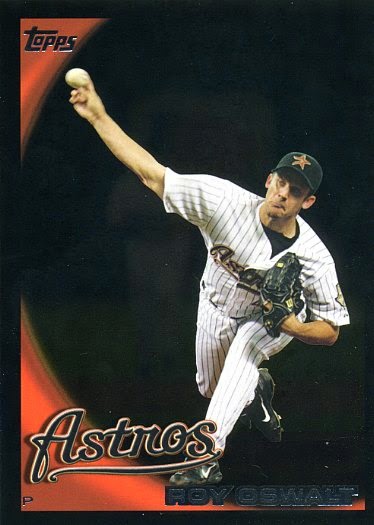 This package was nearly overwhelming, so I tried to cull it down to some of my favorite highlights. That’s a chrome Wandy up on the left here, and the Roy O on the right is one of the Wal-Mart blacked-out parallels, something I didn’t even know existed. That’s pretty cool. 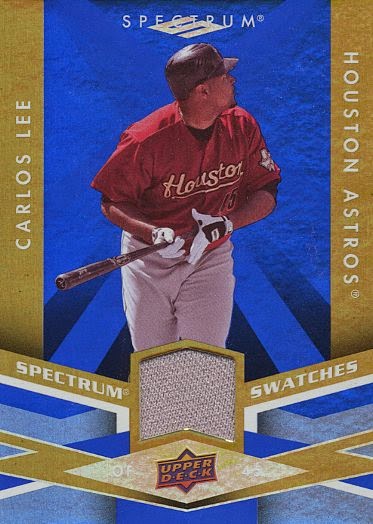 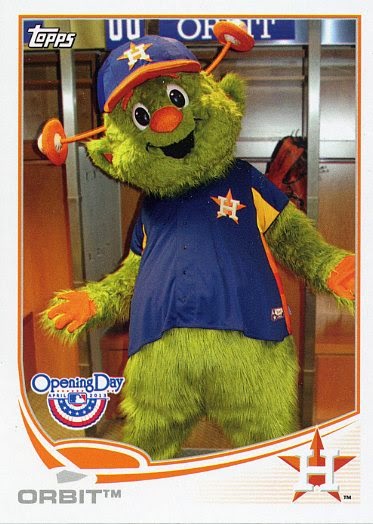 Carlos might have been the only swatch in the stack, but he was far from the only score. Check out that Orbit! Ok, so I’m a sucker for the best Astros mascot in history – shoot me. 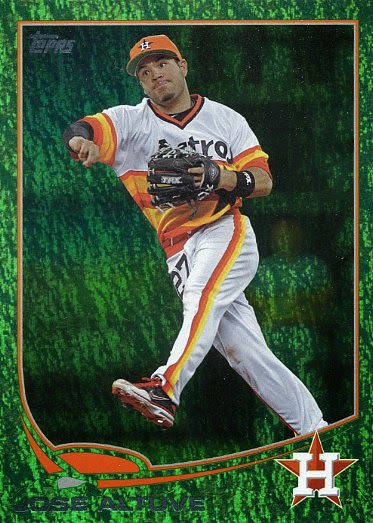 There were some sparklies as well – ol’ Downsy here filled in for a bit, but I’m more than happy to let Jose Altuve hold down second base for years and years to come. 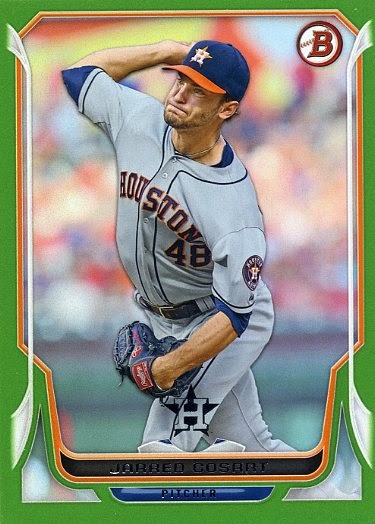 If I had gotten around to posting this before I left, Cosart’s Houston uniform would still be accurate. Unfortunately, we’ve lost him to Miami – where at least these green borders will still fit. I’ll really miss him – he’s got a tremendous amount of potential – but I think the trade is a pretty even one, and the Astros actually have the ability to come out on top if Marisnick and Moran pan out – and that compensation pick looks pretty sweet as well. 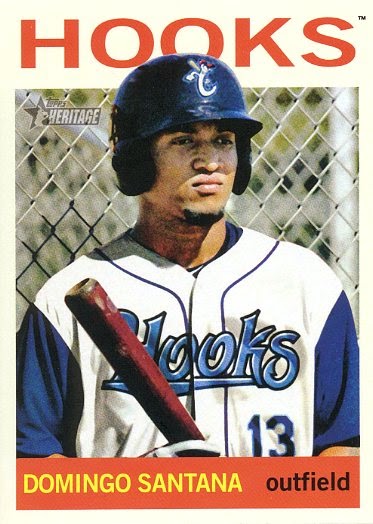 Pat also slipped in some minor-league ‘Stros as well, including some of the best prospects in our system. As I was typing this post last night, I watched Jonathan Singleton absolutely crush a ball, which didn’t quite get out of the ballpark – but he managed to turn it into a glorious, epic, earth-shattering INSIDE THE PARK HOME RUN! It was incredible. Hell, the whole Astros game was incredible last night – dingers, Robbie Grossman robbing a homer, Singleton’s inside the parker, Mike Foltynewicz’s debut, Chris Carter stole a base (uh, yep), and Jose Altuve lit up the basepaths by scoring from first after a bad pickoff throw from R. A. Dickey.

Domingo didn’t fare too well in his brief call-up, but I’ve got hope that he was just pressed into service too early and that he’ll put it together in time. 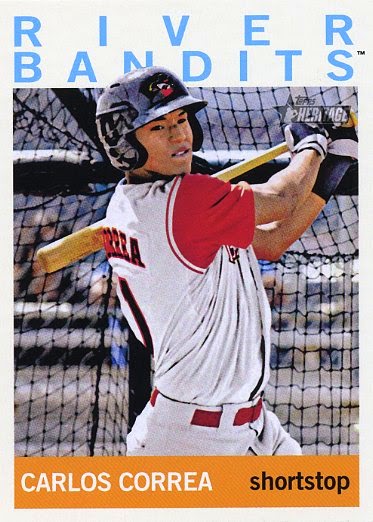 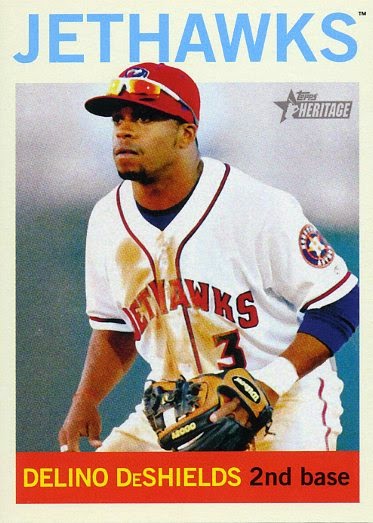 These two young fellows both took serious blows this year, but I’m hoping they bounce back strongly. Correa’s was a freak injury, and DeShields took a fastball to the face. Neither one was foreseeable, but hopefully the foreseeable future is bright for both of them. 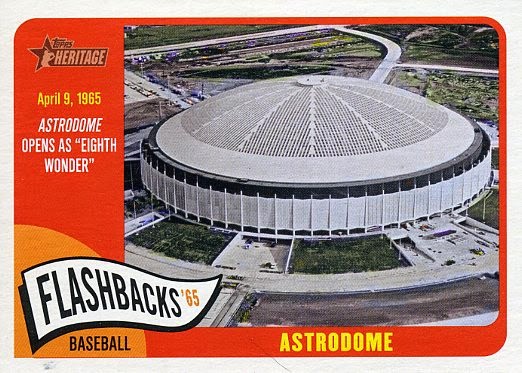 To top it all off (pun fully intended, by the way) Pat packed in this, which is probably my favorite card from the 2014 Topps Heritage set – one celebrating the Astrodome!

So Pat, thanks for the bevy of cards, and hopefully I can find something soon to send back your way. For those of you who haven’t been trading with Pat, well – why would you wait?!?