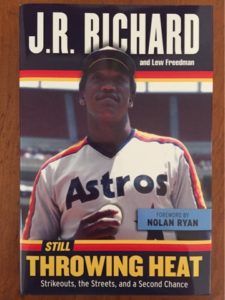 A few weeks ago, I got wind that famed Astros hurler J.R. Richard not only had a book coming out that I knew I needed to pick up, but also that he was going to be signing it at the Barnes and Noble a few miles away from our house. So, I planned my Saturday accordingly, and made sure to stop by to listen to J.R. speak, field some questions, and then sign autographs and snap photos for all the fans.Many folks know J.R.’s story, but for the uninitiated, he was (and still is) a huge man, standing 6’8″ on the mound, 220 pounds. He had a blazing fastball, comparable with that of future teammate Nolan Ryan, crossing 100 miles per hour regularly. He led the National League in strikeouts in 1978 and 1979, with 303 and 313 respectively, and was the epitome of “effectively wild.” Hitters were terrified of J.R. when in the box, both because he was dominating, and because they didn’t want to wear one if he missed. 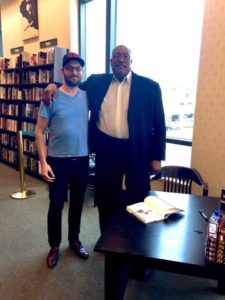 Richard was in the midst of his best season yet in 1980, pitching absolutely phenomenally and given the honor of starting the All-Star team. The Astros had the best rotation in baseball, with Richard, Ryan, knuckleballer Joe Niekro, and a hot Vern Ruhle all manning the mound.Unfortunately, Richard’s 1980 season would come to a horrific end just weeks after that All-Star game, when he suffered a stroke during warm-ups. It would end up finishing his career, despite a tremendous comeback attempt that saw him return to the mound. His line for the year would stand at 10-4, with a 1.90 ERA, in 113.2 innings over 17 starts. Four of those were complete game shutouts, and he struck out 119 batters for a SO/9 of 9.4, walked 40 and gave up just 65 hits, only two of which were home runs. That’s a WHIP of .924 – pretty damn good.

Oh, and did I mention he was a huge man? He’s still huge: here’s a picture of us at the signing. I’m 6’2″ and am not used to being the person with significantly smaller hands. Seriously, when I shook his hand it completely swallowed mine. I felt like a kid.

Richard’s story is compelling, and far too detailed for me to go into it here to do it enough justice. He felt the Astros didn’t give him enough of a chance to rehab, and they turned him loose. He was homeless at one point, living under a bridge just blocks from where the new ballpark was built in 2000. Eventually he was able to get help, and has since become a preacher. The latest Astros regime has also made amends with J.R., bringing him in for events and appearances, and hopefully soon will retire his number. I could keep citing statistics, but go look at his Baseball Reference page, and take a look for yourselves. Richard has no doubt that he could have come back to the mound, and he was on track for a Hall of Fame career before the stroke. 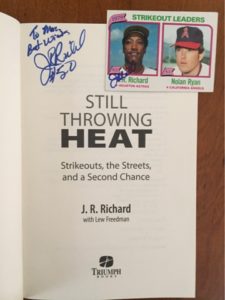 During the Q&A, several people asked Richard good questions, and some silly ones as well. Knowing that he spends much of his free time fishing, I asked him where he goes – not angling for his spots, but just curious which areas he prefers. He said, “Where do I go fishing? The water.”Someone asked Richard who the best pitchers were, and he named a select few greats – Gibson, Paige, Nolan, and himself of course. He followed that with the comment, “I’m the only one that could throw a ball through a car wash without getting it wet, though.”

The man was certainly self-confident. Asked if any of the hitters he faced ever intimidated him, the reply was a flat, “No.”

I brought along a couple cards, but decided not to press my luck as I had already gotten two signed by him in the pre-season Astros Caravan appearances. In the end, I decided to get the 1980 Topps Strikeout Leaders card signed, in hopes that I can get the other half signed someday. 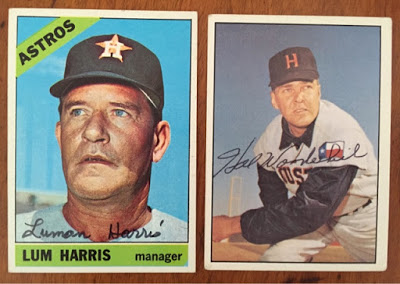 To top off an already fantastic day, I hit the mailbox and found a couple of eBay pickups to add to my team autograph roster: former manager and coach Lum Harris, and former Colts pitcher Hal Woodeshick.As I read the book, I’ll share some anecdotes, I’m sure. Until then, do a little reading on J.R. yourselves.
– Bru