by MarcPosted onAugust 26, 2017July 9, 2019
Aug. 26, 9:45 am: Harvey’s deluge is underway. Well, at the moment, it’s actually hit a pause here in our location, but the rainfall has begun to hit Houston. We got around 2-2.5 inches in our spot in the East End last night, and it looks like we’re getting about an hour break from the festivities before the rain picks back up, with possibly another break around 2 pm.
My folks down in Sugar Land (about 20 miles SW) are closer to the storm center, and got pounded with close to 5 inches. Mel’s parents in Danbury (40 miles due South) are much closer to the coast, and have seen more action. Power is out in their town, though hopefully they’ll be able to restore a bunch this morning. Her dad has a generator that he’s going to pick up from his repair shop this morning (he’s a mechanic), but other than a bunch of rain, they didn’t get any action. Over at her mom’s house, however, a tornado passed right by their house – like directly past their bedroom window. It took out at least one power line and a pecan tree, and snapped more trees, leaving a live downed line in their yard. Her mom said she felt the pressure change in the entire house, and was a little surprised they had a roof. Thank goodness there’s a sizable field between them and their neighbors. Danbury is supposed to have one of the highest rainfall totals for the day, nearing 8 inches in the forecast.
Alright, now that the weather’s done – on to the cards!
I finally sat down and watched the Fastball documentary on Netflix around a month ago. In doing so, I found an even greater appreciation for Bob Gibson. His candor and comments were really fascinating, but he was also far more jovial than I imagined him to be. You always hear about how tough, mean and terrifying he was on the mound, but he was so laid back in the interviews that I found it quite fascinating. At one point he even said something about how that was all an act up there. So it got me to thinking about how I really wanted to add a Gibson auto to my collection, and how I knew that there were a bunch of cheap ones floating around eBay – because I’d looked for something similar before.
A few searches, several clicks, and a handful of days of waiting, and I’d secured a nice little win for the collection, along with a bonus: 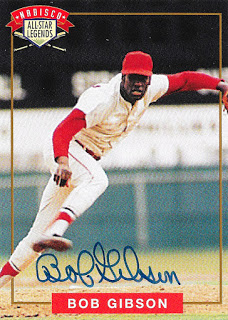 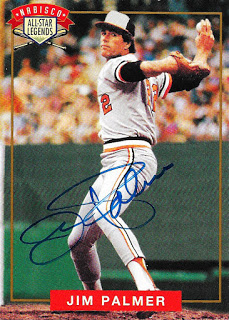 Yep, not one, but two Hall of Fame pitchers! These are from the 1994 Nabisco All-Star Legends set, one of those amazing food-issue mail-ins from the 90’s. There are two more cards in the set – Duke Snider and Frank Robinson. All told, I nabbed these for just about 15 bucks, shipping included. Sure, there aren’t any logos here, but I love these kinds of things, and you can’t beat that price with a stick – or a bat, or even a hurricane.

Until the next dispatch,

0 Replies to “The Hunker Down Chronicles, Part 2: Some HOF Pickups”