Aug. 26, 8:30 pm: Well, the rain began rolling back into our part of town about half an hour ago. We’d been clear since about 11 am, but tonight is going to bring a hefty amount of rain.

Let’s show off a five pack of vintage cards from a pair of eBay pickups. 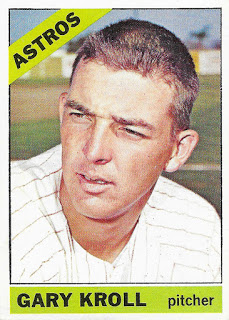 In my quest to get an Astros/Colt .45s card signed by each member of the all-time roster, that means tracking down some tricky cards – in particular, I’ve put off these two pesky 1966 high numbers for quite some time. But Kroll and Mantilla have great success rates, so I finally dropped a little coin on eBay to secure a pair of nice looking ones for some signatures. Now, neither of them is actually in an Astros uniform on their hatless appearances, with Kroll in Mets pinstripes and Mantilla wearing a Boston collar, but I’ve lucked into two fabulous photos of them that I can shop into some customs. These were each about 10-15 bucks. 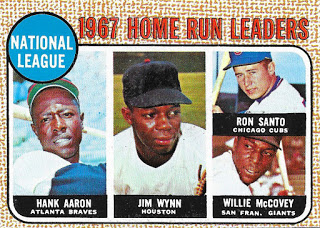 Any seasoned eBay card shopper knows the majesty of combined shipping. So I went hunting briefly through the low-priced cards under the “Seller’s other Auctions” section and found this gem, which I need for my ’68 team set, for a scant extra $1.20. Yes, you read that right. Three HOFers and the Toy Cannon for just over a buck. Aaron said that Wynn would have had him beat for the HR title that year if it wasn’t for the cavernous Astrodome. 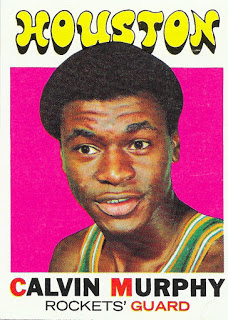 My “Houston” search also turned up this lovely gem, a second-year card of basketball HOFer and Rockets legend (and the basketball annoucer’s equivalent of Don Cherry when it comes to attire). This ’72-’73 Topps is Calvin’s first Houston card, as he’s still show in the formerly San Diego Rockets green and gold uniforms. This added less than a buck to my total at the whopping price of 95 cents!
But the best bonus pickup of the lot was the next card… 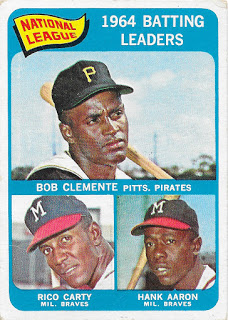 This ’65 NL Batting Leaders is now my oldest piece of vintage Clemente cardboard, and I was able to add it to my digital shopping basket for just $2.10, and it is in fabulous shape. Seriously, I even knew this card was in the package and I was still giddy when I opened it.