by MarcPosted onNovember 23, 2017July 9, 2019
Alright, time to play the eternal game that is mailbox catch-up. October was another fine month for the autograph collection, netting several new signatures from the Astros all-time roster, as well as a few others. Let’s have a look at what rolled in, shall we?

Jason Grilli is one of those guys who has bounced around the league quite a bit since he first made his debut back in 2000 for the Marlins. He’s currently played for 9 teams, wrapping up 2017 with his second stint for the Rangers. He came up as a promising starting pitching prospect, and later converted into a standout reliever, making the All-Star team in 2013 as the Pirates closer. Grilli’s been a pretty good signer TTM, which is why I sent a few extra cards – including another minor league card and a yellow bordered 2014 Topps that I thought would look rather cool. I only got the Just ’99 back signed, so I’ll have to try again with the others, but this card was the most important one to me. Back in 1999 we did a three-week baseball roadtrip (which I’ll have to chronicle here sometime) and in advance of that I bought all three series of this set as it was released, hoping it would provide me with some good cards for autographs. I managed to get several signed, but not nearly close to all 250 – so it’s nice to add another card from the checklist to the collection now and then. 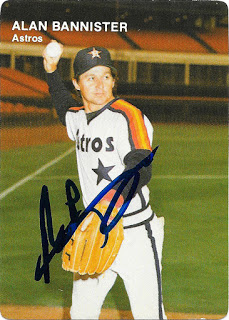 Bannister (no relation to Floyd – or Brian, obviously) had a brief stay with the Astros at the end of his major league career, getting into 9 games with the Astros in 1984 before being traded to the Rangers. He’d wrap his major league time with Texas in 1985. In those 9 games he went 4-for-20, with 2 BB, 2K, and 2 runs scored.
Eric Bell: 4/4, 7 days. 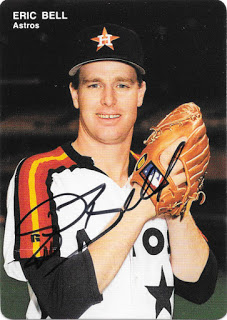 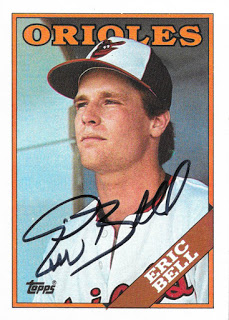 Bell is another short-term ‘Stro, spending some time with the team during the 1993 season. That Mother’s Cookies card marks his lone Astros appearance on cardboard. The lefty came up with the Baltimore organization in the late 80s, and spent ’91 and ’92 with the Indians. The Astros signed him prior to the 1993 season, and Bell made it into 10 games for the club, facing 34 batters across 7.1 innings – not exactly a LOOGY, but definitely used sparingly. He gave up 5 runs on 10 hits, 2 walks, and 2 strikeouts, before being sent down to AAA in May, where he’d finish the season. 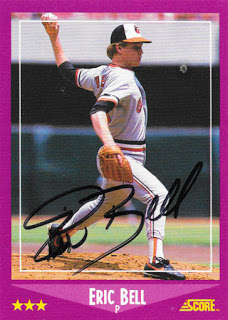 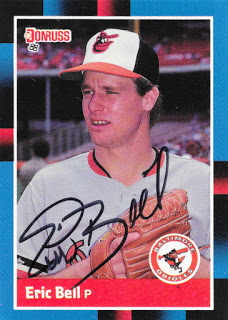 Bell spent the next three seasons at the AAA level, spending ’94 and ’96 in Tuscon, Houston’s affiliate, and ’95 in Buffalo for the Indians. He signed four cards for me on a quick turnaround. 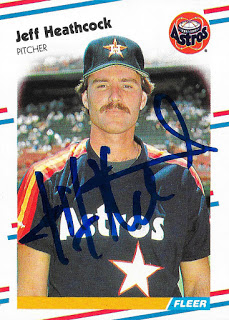 1988 would mark the end of Jeff’s major league career. The righty was twice a first round draft pick – the Padres picked him at #14 overall in the June 1979 draft, but he did not sign. Heathcock spent the summer pitching in for the Anchorage Glacier Pilots of the Alaskan League and transferred to Oral Roberts University in Tulsa, OK. Jeff and his teammate Mike Moore were both on the 1980 USA Baseball Collegiate roster as well, and come June 1980, the Astros made Heathcock the #1 overall pick. The righty spent parts of four seasons at the big league level for Houston, getting a September call-up in 1983. In his second appearance, Jeff replaced Bob Knepper in the second inning, retiring the first 8 batters he faced and throwing 7.1 innings while only allowing one hit. He must have been injured for much of 1984, as he only appeared in 4 games at the AAA level. Heathcock made it back to Houston in 1985, but spent all of 1986 in Tuscon, before wrapping up his major league days in Houston from 1987-88. The once promising pitching prospect finished with a 9-9 record in 56 games and 158 IP, with a 3.76 ERA, 1.19 WHIP, 64 strikeouts, and 42 walks. 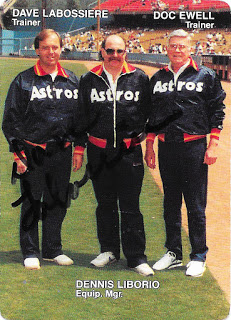 This was a fun one. Dave Labossiere spent over two decades with the Astros on the training staff, working over everyone from Mike Scott to Jeff Bagwell’s failing late-career shoulder. I tracked down an address for Dave at his home in Steamboat Springs, where he enjoys skiing and other outdoor activities in his retirement. Dave answered my questions as well, including two responses to my favorite question to pose: What’s the strangest thing you’ve seen in baseball? His answers stemmed from instances at Wrigley Field, when he saw (a) “a Cubs pitcher in Wrigley being knocked off [the] mound by Blue Angels overflight” and (b) “a Cubs fan jumping on field and taking off his clothes while walking toward our pitcher on [the] mound, then being grabbed by security and brought up through the stands completely naked.” Ah, Cubs fans. This was a fun return, but I don’t plan to hang onto it too long – it’s going to make its way to longtime Astros Equipment Manager Dennis Liborio next! 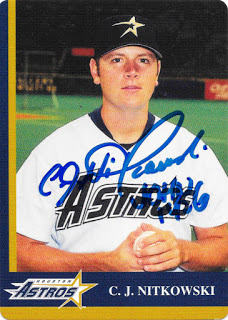 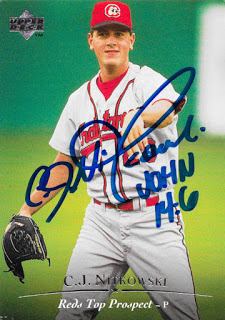 Nitkowski was another brief Astro, drafted in the first round in 1994 by the Reds before moving to the Tigers and then making his way to Houston via the massive 1996 twelve-player trade between Houston and Detroit. We also got Brad Ausmus, Jose Lima, Trever Miller, and Daryle Ward, but lost one of my favorites at the time, Brian Hunter. Nitkowski spent 1998 with the big league club, posting a 3-3 record in 43 games with a 110 ERA+ and a 1.207 WHIP. After the season, we traded him and Ausmus back to Detroit for Paul Bako, Brian Powell, and other assorted parts. Nitkowski was also one of the first ballplayers to keep an active blog, something he did at the Astros request and continued after he left the team. C.J. signed the Mother’s Cookies card I sent, along with a ’95 UD Minors card that he included.

October was full of successes from short-term ‘Stros! Mark Grant also spent part of the 1993 season with the club. He opened the season with the team and made it into 6 games before a May 20th trade to the Rockies for Braulio Castillo. That was long enough for Mark to nab a spot in the annual Mother’s Cookies set, though, marking his only Astros appearance in the cardboard world. I wrote to Mark via the Padres, where he’s been on the broadcasting team for some time now. 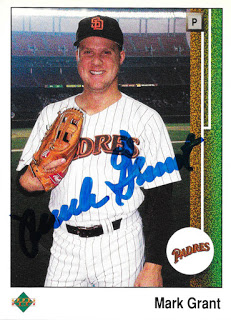 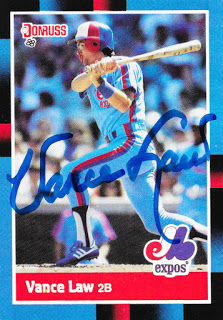 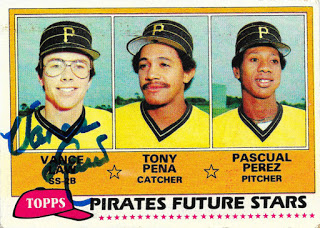 Like his father Vern (perhaps because of him), Vance came up through the Pirates system. His dad was a Cy Young award winning pitcher and World Champion with Pittsburgh in 1960, where he spent his entire 16 year career. Vance, on the other hand, bounced around a bit – an infielder who spent time with Pittsburgh, the White Sox, Expos, Cubs, and Athletics. Before he wrapped his big league career with Oakland in 1991, he’d also spent a season with the Chunichi Dragons of the NPB. 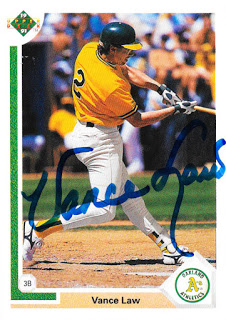 Vance did make an All-Star team with the Cubs in 1988, part of the then-record six Cubs players to make a team, along with Dawson, Sandberg, Maddux, Palmeiro, and Dunston. While he predominately spent time at third base, he did make seven pitching appearances throughout his career, throwing eight innings in 7 games – surely showing off some tips from dad along the way. Vance is a quick signer with a nice signature, and now it’s time to send that ’85 Father-Son card off to Vern.
Fred Valentine: 4/2, 27 days.

Let’s wrap the October recap with a little vintage, shall we? You gotta love Fred Valentine! Oh man, even though I had this card sitting in my collection, I’d somehow totally missed out on Fred until I saw some February posts celebrating him in our cardboard community. So of course I put it in the back of my mind to dash off a letter someday. Well, I found this rad photo of Fred with the Hawaii Islanders (then a Twins minor league club, I believe), and made a print. The time was right, I suppose. “Squeaky” spent seven years at the big league level, putting up a .247/.330/.373 slash line in 533 games. He had his best season with the Senators in 1966, when he hit .276 with 16 homers, 29 doubles and 7 triples, along with 59 RBI and an .806 OPS (131 OPS+). 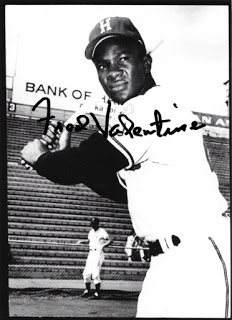 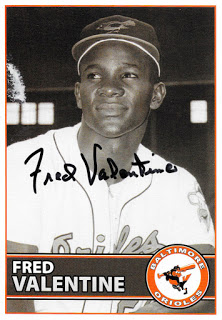 Fred not only signed my card and the photo, but also signed the extra copy I included for himself to keep and threw in an additional postcard from his days with Baltimore. What a return!
Nine more returns, including six more Astros from the All-Time roster! Plus a Valentine! October was a fine month indeed.
Ok, time to start catching up on some other stuff.
– Marc