Back in October I sent everyone’s favorite late-night blogger (that’d be Night Owl for those of you not in the know) a growing stack of Dodgers that I’d meant to put in the mail for some months. With the inserts and parallels I’d dug up, along with some oddballs, I was hoping there was enough there that he’d forgive me for the onslaught of miscellaneous base cards.

It must have been good enough, because he slipped a nice little package my way in return. Oh, who am I kidding? Of course he was going to send something, Greg’s one of the best out there in our card-blog world.

I had one of these super-rad 1984 Fun Foods Jose Cruz pins already, but I toted it to Nashville when we visited at Thanksgiving and passed it on to my brother, along with copies of various Houston Chronicle front pages and sports sections from the World Series, and of course a copy of the Sports Illustrated World Series commemorative issue. I know Greg would appreciate that sort of gesture, given his familiarity with newsprint. Oh, and one more thing – a Sunshine Kids pin, straight from Sunshine Kids HQ here in Houston. I worked a Halloween event for them and got a few of the iconic sun pins (that you’ll have probably seen on Craig Biggio’s hat). My brother was thrilled. 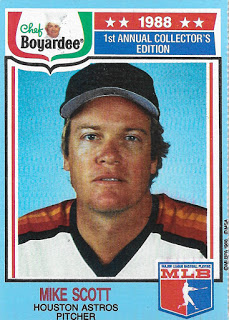 There was cardboard in the package, of course. I think I’ve got a few copies of this ’81 Donruss J.R. Richard, but it’s just too good not to feature. That Mike Scott Chef Boyardee card threw me for a loop, though – it’s fun to find an oddball set you never knew about. It looks like these were probably a box cutout – I wonder what product they adorned. I’ll have to look that up. 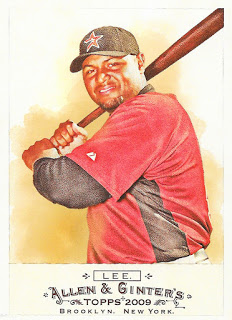 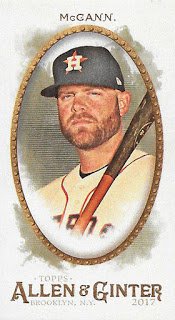 It’s always nice to fill Ginter holes in my Astros checklist. The McCann is a mini, and probably my favorite Astros card of him so far. 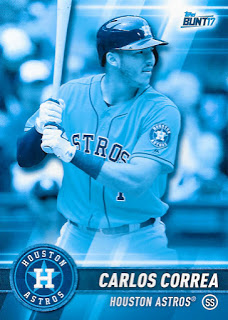 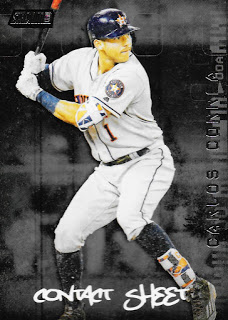 There was some Correa cardboard as well – a blue parallel from this year’s Bunt issue, and a Contact Sheet insert from Stadium Club. I’m always grateful for more Carlos cards, but that Contact Sheet insert set needs to die already. It’s three years old now, and each version was worse that the last one. What is that terrible font? 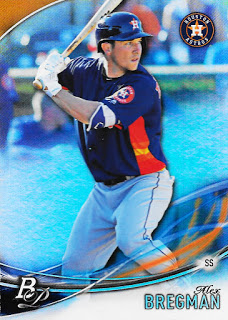 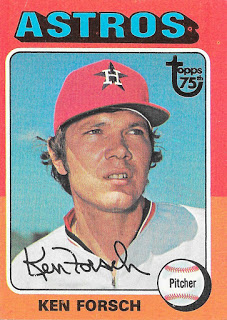 This, however, was the true highlight of the package. It’s one of the 2014 Topps 75th Anniversary buybacks, with a rather lovely looking buyback stamp. But it’s also a 1975 Topps Ken Forsch, and if you know anything about Greg, that ’75 set means a lot to him, so I know it’s extra special. Thanks so much Greg!
Oh, and I want all of your Astros buybacks, folks. Even those dumb Rediscover Topps ones. Just so we’re clear on this.
– Marc