So I finally made it through the year’s worth of TTM returns – well, almost. I showed you all the baseball returns, but I withheld the handful of other autographs that arrived in my mailbox. While the great preponderance of what I send out in the post is baseball requests, every now and then I find something else to send off for ink. Sometimes it’s a reported return that piques my interest, at other times I just happen to come across a card in my collection (usually while pulling cards for trade) and think, Hm, I wonder if that person signs?

So without further ado, I present to you my non-baseball returns from 2017. 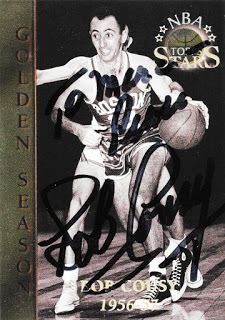 I netted a big one (get it?) back in February with this Bob Cousy signature. This card comes from the 1996 Topps Stars set – a 150 card set featuring the 50 players who had just been named to the NBA 50th Anniversary All-Time Team list. Each player had three cards in the set – a full stats card, a “Golden Season” card highlighting their best year, and a card with career highlights listed on the back. Bob was one of the true legends of early basketball, and getting this one back was a nice treat. I may try to send another one of the cards from this set to him soon. 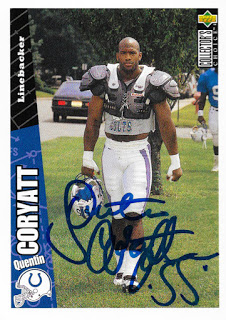 I covered this one back in March when I received it, but I figured I’d list it in the recap as well. Coryatt went to my alma mater, Texas A&M University (Whoop!), and is best known for a tackle that is simply known as “The Hit” in A&M football lore. 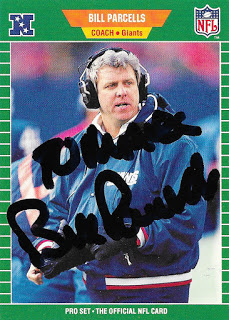 This was one of those where I saw a reported return, so I snagged a card in a TCDB trade to send off for a signature. Wasn’t expecting the return to be that quick! 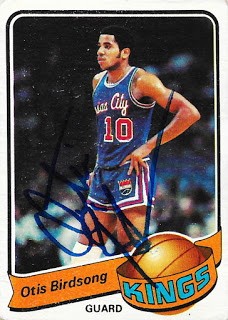 Otis was a member of the legendary Phi Slamma Jamma at my second alma mater, the University of Houston (where I got my MBA). This card came from another TCDB trade where I was unloading a brick of cardboard and pilfering a few pieces for my collection. If I didn’t find much from my want list, I started looking to see if there were any cool vintage pieces, baseball or otherwise, that I might like. After seeing that Otis not only signed, but reading about his collegiate and subsequent NBA career, it was a no-brainer. 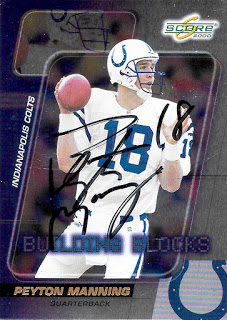 Another legendary football name, I noticed that a couple times each year Peyton sends out a string of returns from requests sent to his foundation. I found this one among my football cards and figured I’d give it a shot. I bet when I originally pulled this out of the pack I’d hoped it was Ryan Leaf instead. Hah. 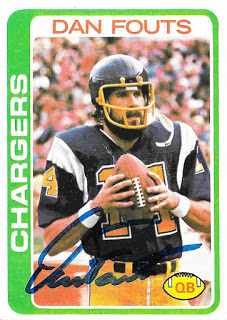 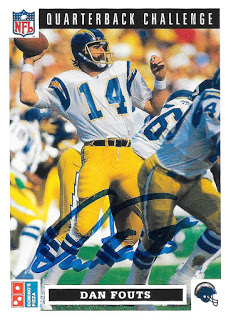 These also came in a couple TCDB trades as extra return TTM fodder. Gotta love the vintage Chargers card, and the Domino’s QB Challenge set is a nice little oddball series. Another football HOFer in the books! 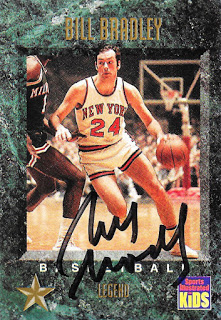 My final non-baseball return of 2017 was this Sports Illustrated for Kids Bill Bradley card. I’d noticed a return for him on SCN and again thought to myself, why not? Bradley was a two-time All American and named the Collegiate Player of the Year by several organizations in 1965. He also won a gold medal on the 1964 Olympic team and two NBA championships with the Knicks in 1970 and 1973.

Goodness gracious, I’m so glad to be done with all of this. Now I’ll just need to recap December soon and catch up on all the wonderful cardboard that’s continuing to come in via trades. I have some more posts that I want to do – a few on how my collection has transformed since I’ve resumed it, a couple of the Blog Bat-Arounds that I’ve seen, and maybe come 2018 I’ll finally tackle that 30-Day challenge that Tony from Off Hiatus issued last year.

I swear, I’m going to get this blog caught up by the end of January – at the very least, I’ll have all the posts queued up by then.