Surprise, surprise! It’s another entry in the ongoing trade catchup from 2017. Yes, we’re still in March, but we’re soldering on – we shall leave no trade unposted! These cards came from TCDB member Jay (jayoneill). I sent over some Derek Jeter cards and a few Yankees from 2017 Heritage, and in return he kindly packaged up a handful of vintage Astros that I needed.

First up is the ’72 Astros team card, featuring the ballclub decked out in their new red colorways. 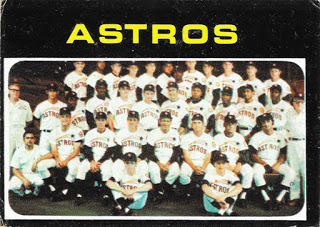 This off-centered baby was a real nice addition. That’s the proper look for those lovely shooting star uniforms, even if the folks at Topps chopped off everyone’s head in the back row in order to make sure we can see those bat boys in full. This is a pesky high-numbered card too, clocking in at #722 on the checklist. 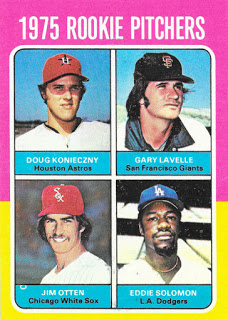 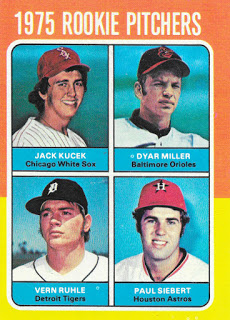 Jay also had these two 1975 rookie quads that I needed, for their featurings of Doug Konieczny and Paul Siebert, respectively. Vern Ruhle would go on to have a fine career, including several good years with the early 80’s Astros. I think these might have put the kibosh on my team set, but I may still have needed the Jose Cruz at this point. Either way, I’ve finished the base set and now just need several of the minis.

The real treat in this trade, though, is this last card. 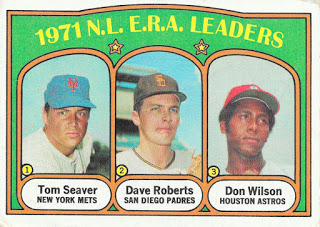 1972 Topps #91: NL ERA Leaders, featuring Tom Seaver, Dave Roberts, and Houston’s Don Wilson. I figured this one might be a long time coming, since I’m operating on a budget over here. Jay was kind enough to swap it, however, which took care of a big need from the ’72 team set. I’m down to needing 7 high numbers now, all above 600.

Thanks again for the trade Jay! I’ll have to strike another one up with you soon.