by MarcPosted onFebruary 16, 2018July 9, 2019
Time to dig back into last weekend’s card show finds. Are you ready for an absolute onslaught of Jeff Bagwell cards? I sure hope so, because that’s what you’re going to get in this post. The second table I hit had a 25¢ Bagwell box, so I eagerly dug in to land some new cards of my favorite player, and the box did not disappoint. I managed to pick up 21 new cards, and of course a few dupes because I wasn’t verifying against my want list. All told, I dropped five bucks and the box was a success. I stumbled across several cards I’d never seen before. 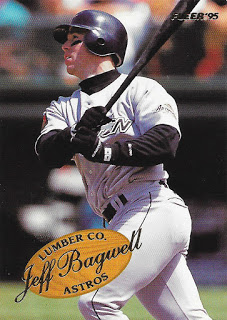 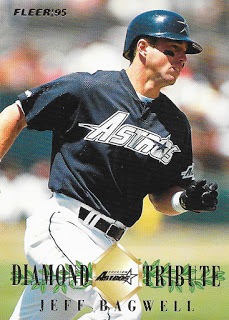 I’m always a bit surprised when I find mid-90s Bagwell cards that I don’t have, particularly some as seemingly common as these two inserts from ’95 Fleer and Fleer Update. For as insane as that set was, these inserts are super clean. I did a ton of Bagwell buying into the late ’90s, so I thought I had a good bit of that covered. Lumber Company cards were apparently seeded 1:24 packs, retail only. The Diamond Tributes fell 1:5 wax packs of update. 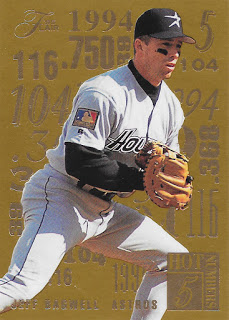 Now the Flair Hot Numbers insert, that’s a different story – from a markedly more upscale set, I expect to run across some inserts I didn’t already have. I grabbed the Prism unsure of whether or not I had it, or if it might have been a parallel. Turns out I had one already, so this will go into the available dupes. 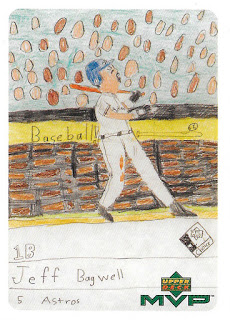 Now these are more cards I didn’t know about. The SI for Kids cards are always tricky to track down – so many are in poor condition and I’m sure a lot were just thrown out. When I saw this in the box I got real excited. On the right we have a “Draw Your Own Card” insert from 2000 Upper Deck MVP. I remember pulling a few football cards like this. They were real hit and miss – I got a really nice well done Brett Favre, but other times you would get clearly kid level drawings like Jeff here. Baseball! 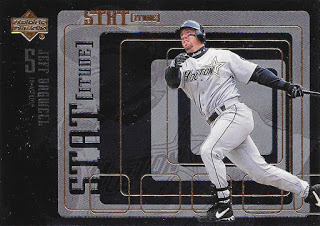 Here’s another Upper Deck insert from *booming voice* THE YEAR TWO THOUSAND. With a Biggio from this insert already in hand, I’ve now knocked it off my want list. 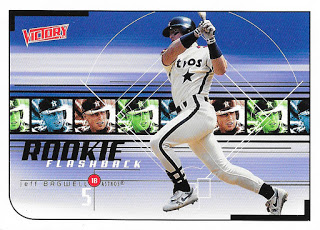 Hmm. Rookie Flashback – where have I seen that before? Oh yeah, in 2016 Bowman. This has me realizing that the more cards from 1995-2005 I come across, the more I feel like Topps is starting to rehash old ideas of its competitors. I’m trying to think of the other inserts I’ve seen that have shared a name with older ones, but I’m drawing a blank at the moment.

This is apparently a base card from 2003 SPx. Hadn’t seen these before. Astute observers will notice the DK on Bagwell’s hat in honor of his friend, the late Darryl Kile who had passed away unexpectedly in June of 2002. 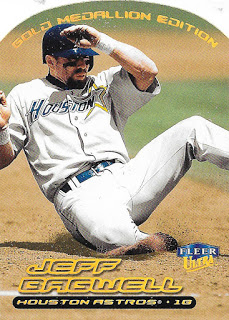 Parallels! Or so I thought. I mean, I knew I needed that 2000 Ultra Gold Medallion. But the Gallery on the right got me. Turns out it was just a base card and I had it already.

I knew I didn’t have these Topps Stars cards, though. I passed on picking up the base version of the card on the left – I couldn’t be sure if it was in my binders, but the Two Star copy was a definite need. I thought the Luminaries card was an insert, but it’s a subset from late in the checklist. It’s very cool looking. 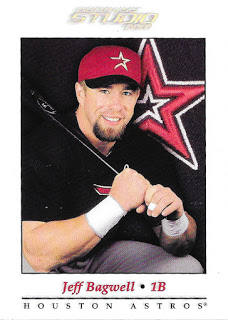 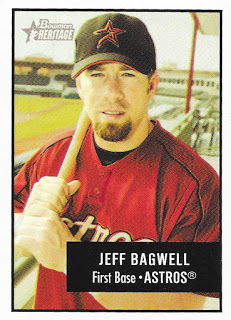 Is all this crazy Bagwell action making you tired? Sit down! Let’s take a rest. Go grab yourself a Fresca from craft services. Here’s a couple of posed shots. 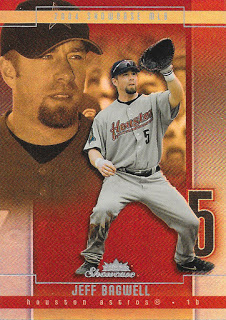 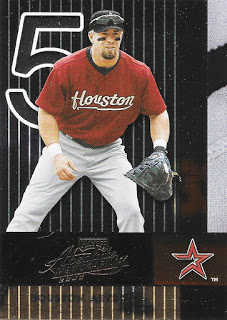 Alright, time for fielding practice. These are from 2004 Fleer Showcase and 2002 Playoff Absolute Memorabilia. The Playoff looks much better in hand, it’s basically a foilboard card. 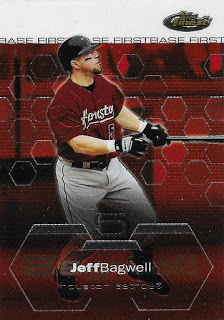 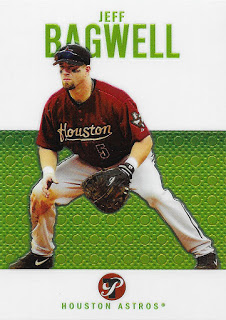 I wasn’t a huge fan of the 2000-2012 uniform era, particularly the godawful pinstripes. Astros just aren’t supposed to wear pinstripes. But I can get behind the red Sunday alternates, they were pretty nice looking. Here’s that Topps Pristine card I mentioned in yesterday’s post about the cards Tony sent. It’s not a bad looking set. 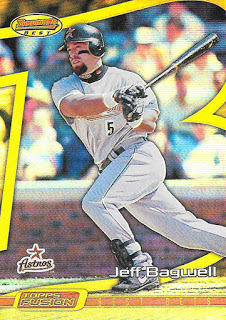 These two cards look like they come from 2001 Bowman’s Best, right? NOPE! That’s because for some crazy reason Topps decided to put together a compilation style set in 2001 called Topps Fusion, featuring cards designed to look like Bowman’s Best, Finest, Gallery, Gold Label, and Stadium Club. It’s, well, interesting. I did already have the actual Bowman’s Best card on the left, although I’m not sure where I picked it up. In writing this post, I noticed the blue ribbon on Bagwell’s right forearm for the first time. I guess that must have been a Father’s Day game (the black Sunday alternates would jive with that), and that’s definitely a temporary tattoo. You can see a blue armband by his glove as well. 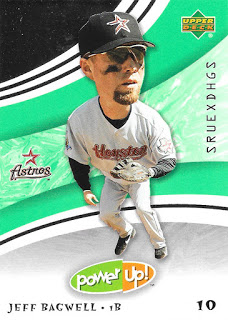 2004 Upper Deck Power Up! is a hell of a weird set. Do you like freakishly large heads? Do you like cards that have codes on them? Do you like your cards to tie into some online game that you can no longer play? Do you also want the set to have inserts? Well then it’s definitely for you. This foil card on the right is from the Shining Through insert set, and it is certainly shiny in hand. Not so great for scanning, however. 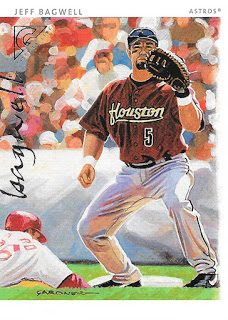 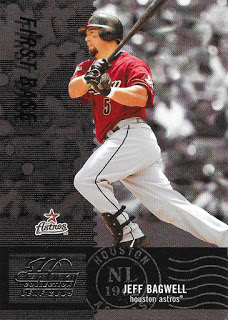 Phew! Well, that was quite the journey. Let’s close out with a pair of classy cards. That’s 2003 Topps Gallery on the left, and that is exactly what a proper Topps Gallery card ought to look like. Painted glory right there. I didn’t really think last year’s set was on the level everyone made it out  to be. Finally, a pretty nice looking card from 2005 Leaf Century, another mid-aughts set that I’d never come across before.
If you made it this far, I commend you fine folks. Thanks for indulging me. There’s still much more to come from this show!