Wednesday morning I posted some cards that I got in a group break that Chris hosted. Well, in doing my digging through the ol’ backlog, I discovered that I had a folder of scans from another break that he hosted last June, which I never got around to posting! Oh, the humanity!

This break involved a pair of boxes of 2017 Archives, one of 2017 Bunt, and one of 2017 Diamond Kings. Given that I was trying to spend less overall last year, this looked like an excellent break to round out some of the 2017 Astros needs. 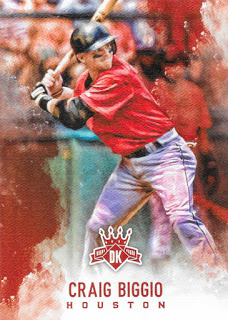 First up, the Diamond Kings. I landed a few cards here, and I think they did a fantastic job with this set. The Musgrove is the rookie layout, while the Biggio is the design for current and retired players.

The highlight of the Diamond Kings, though, was this Altuve. Not only is it well done, but also it’s a short print variation! Excellent work on the part of Panini to find a photo that hides the lack of logos for the most part.

On to the Archives! I think I racked up all the base cards necessary out of these two boxes. Thanks Chris! Topps did an excellent job with the ’92 design, and I’m particularly happy with the horizontal photos they chose. I love a good horizontal card. 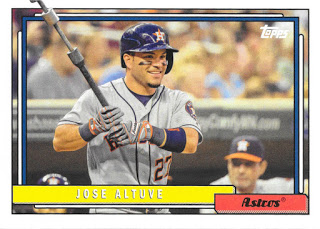 I mean, just look at that! That’s a killer Altuve card. 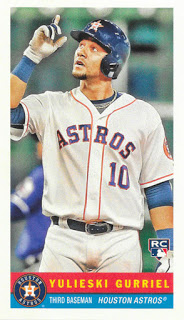 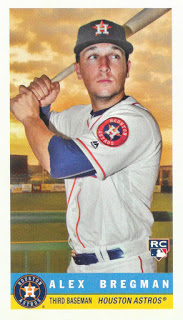 There were some great inserts in Archives as well. These Bazooka-style rookies of Gurriel and Bregman were awesome pulls. This design is fantastic, by the way – it’s a callback to the 1959 Bazooka design. 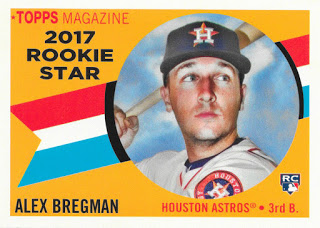 Of course, as we know Topps loves to reuse both photos and designs, so not only do we get yet another rehash of the 1960 rookie design, but also we see Bregman’s photo reused on an insert in the same set. And of course, there have to be autographs and parallels, so you know – on and on. Still, this is a great looking card. I could nitpick the design (Needless RC badge, Topps Magazine differing fonts – and do we really need to try and replace Sporting News in these redos?), but overall it looks pretty swell.

And then, there was Bunt. This is a sharp looking simple set, and affordable. I can dig that. I wasn’t going to go out and buy a bunch of it – if I recall, it barely showed up in my local Target – but I’m very much okay with how Topps has spun a physical set out of the app. My favorite base card was the Yuli Gurriel rookie I pulled. Crazy to think that he was technically a rookie at 33, but that contract is looking like a pretty good one. Had it not been for some dude named Aaron Judge, Gurriel would have had a really good shot at AL ROY. 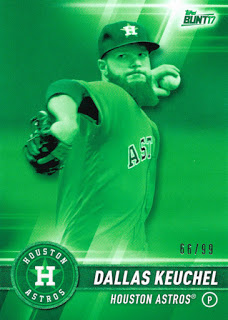 When it came to the Bunt cards, I was struck by the sheer volume of parallels that were added to the set last year. Of course there are base set parallels – and I landed a few from the box, including a nicely numbered green parallel of Dallas Keuchel, #66/99. But there were parallels of the inserts, too – and not just one, like five. I thought this was a set for kids? Topps, what are you doing? 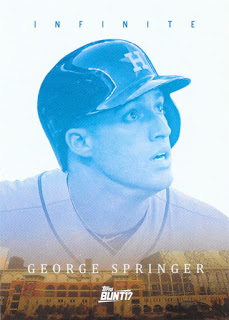 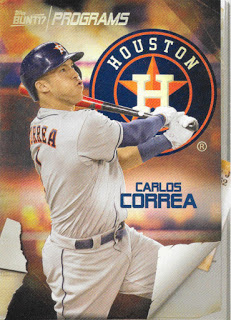 The simple inserts in bunt are a little hit and miss. The Infinite cards were really nice. The Programs, with their faux wear and tear, were a bit silly. Just give me a nicely designed program, I don’t need to see your goofy photoshop stuff trying to make this look like a beat up magazine. 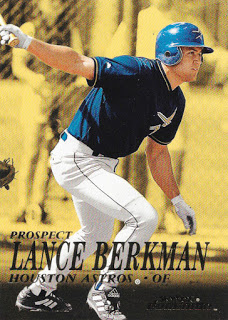 Of course Chris, being the awesome collector and break host he is, threw in plenty of extra Astros to round out the package. There were some nice cards from 2000 Skybox Dominion, an elegantly simple and underrated set that I’ve enjoyed since I was first buying packs of it 18 years ago. These Killer B’s were the big additions, including a nice shot of Skinny Lance, before his Fat Elvis days. 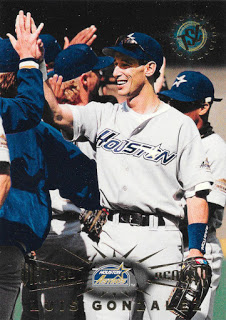 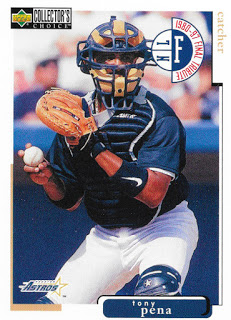 There were some other nice finds from the mid-late 90s – a Virtual Reality parallel of Luis Gonzalez from 1995 Stadium Club and a Tony Peña from 1998 Collector’s Choice. Why is the second so notable, you ask? Well, for a good while I didn’t think Peña had an Astros card, and that I was going to have to make up a custom to get signed for the Astrographs collection. When I saw this one in the package, it gave me a small surge of excitement that you otherwise wouldn’t expect. 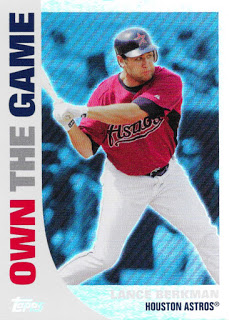 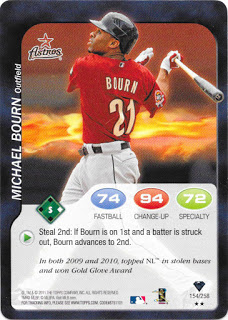 There were some late-aughts/early-tens (teens? what do you call that decade?) needs to be found, including this ’08 Topps Own the Game insert of Lance Berkman and a fiery Michael Bourn from 2011 Topps Attax. I think there were several Attax cards in here, if memory serves.

This was quite unexpected – a 2012 Bowman rookie card of staff ace and recent AL Cy Young award winner Dallas Keuchel? I’d figured that would be a card I might have to pony up a few bucks for at a card show at some point. It was very nice to scratch that off the want list. 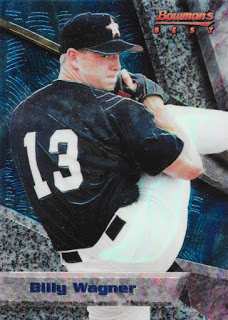 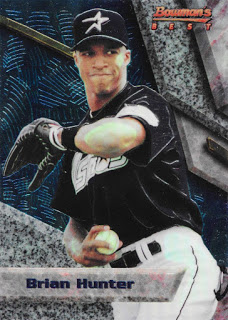 Finally, some 1994 Bowman’s Best to finish it off. These are very cool, and Chris managed to hit several of my needs. Check it out – Wagner doesn’t even have a name on his jersey here – that’s got to be a GCL Astros photo. The Hunter would have been from Spring Training, fresh off the new uniform change.
Thanks again Chris!