Not a whole lot going on here, just a real quick three-card trade from my newest swap partner over at TCDB, John aka shiprider. One of the real neat aspects of TCDB is the “Recent Matches” feature, which will give you two types of reports. The first is for cards people have added for trade that are on your wantlist, the other is when people add cards to their wantlist that are on your trade list. I can’t tell you how many trades I’ve put together thanks to that. Anyhow, that’s how this one happened. 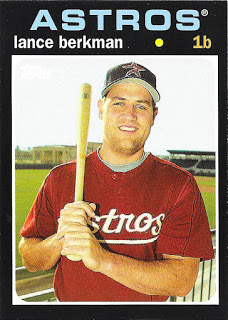 Card one is a Wal-Mart insert from 2007 Topps. This was a 54-card insert set utilizing assorted designs from mainly Topps-related sets of the past, along with some pre-war designs. Lance here got a ’71 rehash. The other Astro in the set, Carlos Lee, is featured on a reworking of the 1911 Helmar Stamp design. 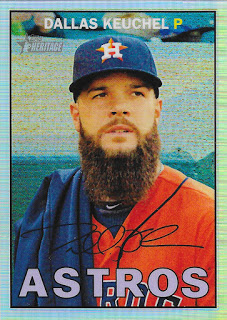 Card two was of the shiny variety. Specifically, this is a chrome refractor from 2016 Heritage, and it’s numbered 308/567. Always happy to add the chromed out Heritage parallels to the collection! 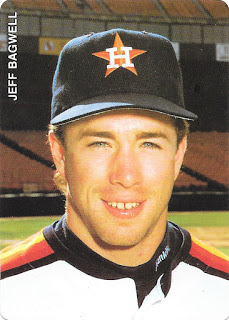 Finally, card three is actually card one – of the four-card 1992 Mother’s Cookies Jeff Bagwell set. Oddly enough, while I have a few of these in their individual cello wrappers, I had yet to actually add any to my big Bagwell binder. It’s pretty rare to be able to add early cards of Jeff to my collection, so this was a very welcome addition. Now to hunt down the other three…

Thanks for the swap John! Let’s do it again sometime.