It’s almost the end of June, so let’s take a quick look at my blogging progress this year. Here’s how many posts I’ve gotten up each month.

And this makes 9, with a few days left to go. That’s a total of 94 posts, which for my standards, is outstanding. However, I’m still about 8 months behind on trade posts. I keep trying to get them up, and I do somewhat. But the cards keep showing up in my mailbox as well, and such is our perpetual struggle, no? Anyhow, here’s another old trade post I neglected to make. This one came from my trading pal Ryan, aka rhinomeadows at TCDB. I sent over a stack of Classic 4 Sport and SI for Kids cards, and in return I got a delightful little envelope full of good cards. 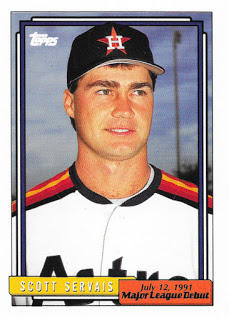 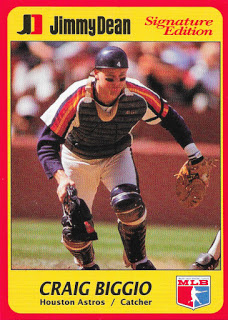 In the early 90’s, the Astros had several catching prospects coming up the pipe, and an All-Star catcher whose knees they wanted to save. So, when Craig showed up to Spring Training of 1992, the team told him they wanted to move him to second base, a position he had never played before. Surprise! You’ve got about a month to become a major-league caliber defender at a middle infield position you have never had to learn. So every day, Matt Galante went out early and stayed out late hitting fungoes and grounders to Craig. Ol’ Scotty Servais was one of those catching prospects, as was Eddie Taubensee (whom I remember for constantly striking out with the bat on his shoulder) and a young Tony Eusebio. Tony would have the most success with the club, going on to become part of the team’s catching platoon for about a decade. 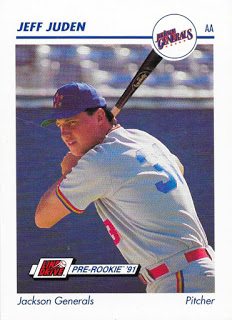 Gotta love those minor league cards, right? Line Drive managed to correctly identify Jeff Juden in their 1991 AA set, something Classic failed to do. Jeff is on Sam August’s card in that set. Shane Reynolds and Orlando Miller are switched as well, and I think there’s one more name mixup if I recall right, with Sam placed on that guy’s card and the third guy getting Jeff’s name. Plus, this one is a pitcher batting! Ramon Castro was the Astros top pick in the 1994 draft, and vaulted up the top prospect list for the club. He never made it to the team, however, getting traded to the Marlins in the summer of 1998. He would go on to play at the big league level for the Marlins, Mets, and White Sox. If it’s any consolation, this is a fantastic play at the plate card. 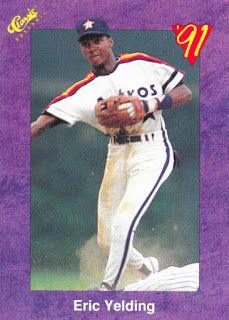 A couple of fine releases from 1991. I picked up the Bouton in my quest to build the ’91 Swell Baseball Greats set. The funny thing is I don’t think I pulled another one out of that box I bought in Nashville. 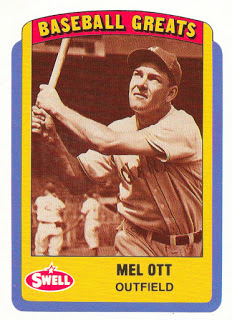 The 1990 Swell Baseball Greats set is the weakest of the three, in my opinion. The 1989 set was very nice looking, and the yellow bordered 1991 set is quite good as well. But something about the border on these just doesn’t work for me. I am trying to build it, though, so I pilfered the Hammerin’ Hank and Mel Ott from Ryan’s trade list. 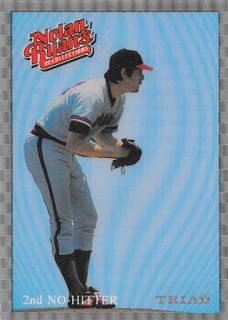 This was the best part of the trade, though. These crazy looking, not-quite-lenticular Nolan Ryan cards come from a 10 card set that you had to acquire one card at a time via trips to Whataburger. For those of you not from here, Whataburger is damn good. I picked up not one, but four cards from the set in this trade. 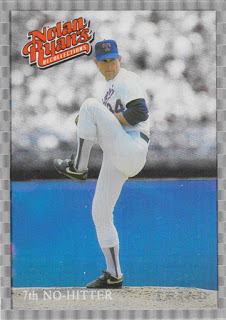 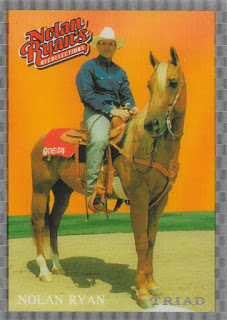 As you might have guessed from the captions, there’s a card for each of Nolan’s 7 no-hitters. And, of course, there’s a card of Nolan astride a horse, because why not? It also looks like the horse is standing on second base – on a baseball field on Mars. I already owned a couple copies of the 5th no-hitter card – Nolan’s only one with the ‘Stros, so this got me to halfway on the set build. But wait, you ask, seven no-hitters and the horse card only make 8 – what are the other two? Ah, how astute of you! The other two highlights featured on cards 8 and 9 are Nolan’s 5000th strikeout and his 300th win. So yeah, the Rangers get four cards in the checklist – five if you count the horse card. 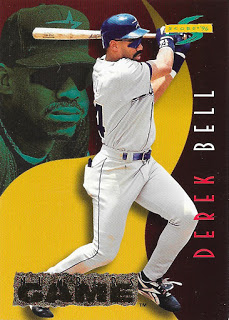 Oh, but that’s not all! Because Ryan and I turned around and made another swap in February. That’s right, this is a two trade post! Again, I unloaded a hefty stack of unwanted cards – this time around 90 basketball cards, and got back a tidy little package of ‘Stros and other interesting cards.

Tucked away in there was this sweet 90’s insert of Derek Bell from 1996 Score. This one was called Numbers Game, for those of you who can’t read the foil, and if I recall right a similarly named insert was put into the Hoops basketball set around the same time. Man I loved those uniforms. 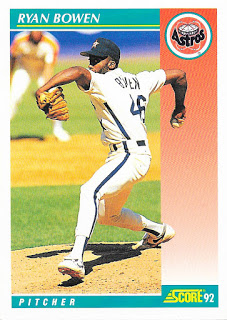 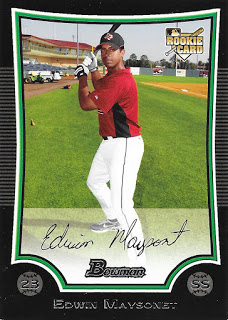 A pair of hot prospects. This 1992 Score Ryan Bowen is actually the error version of the card, which is missing the “Rookie Prospect” stripe that goes above the position designation. It was also the last card I needed for the team set. I think I had this Maysonet but got it signed – or maybe that was a different Bowman card of his. Those 3-4 years all run together for me, particularly because I wasn’t collecting at the time they were released. 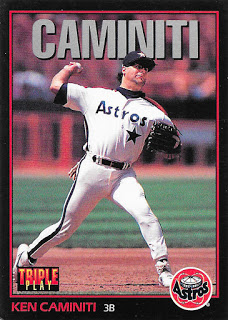 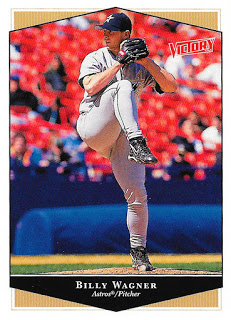 Another pair of fan favorites. These are both pretty elegant sets in a way. I’ve always loved the huge last name going on in the 1993 Triple Play set – and the similarly formatted Nickname inserts work excellently. The 1999 Victory set was Upper Deck’s initial offering of the brand, and it’s a delightfully simple layout. Perhaps it could use a team logo on the front, but there’s really nothing to nitpick here. It was a lower price point set targeted at kids, and the 1999 design is vastly superior to its 2000 follow-up issue. Two thumbs up from this guy. 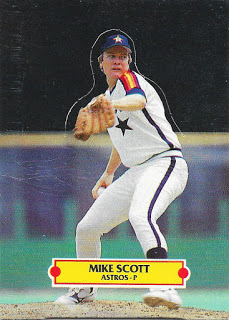 Yoooooo, I love these Donruss baseball stand-ups from their All-Star sets in 1987 and 1988. The 1986 set had these as well, but they were oversized – extra tall. I only had one of these as a kid, a Terry Steinbach whom I proudly folded and stood on my bookshelf. I decided to start slowly chasing these as well. 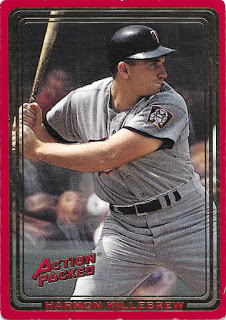 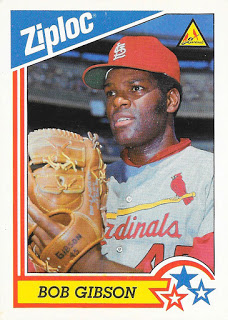 Finally, we’ll close with a couple of HOFers that fall into different sections of my collection. I’ve had a little Killer PC going for a while – a few vintage cards from his playing career, a few of the more interesting contemporary issues, and some of the 80’s-90’s goodness from the “third wave” of flashback sets that were released. I’d consider the early Fleer sets from the 60’s the first wave, with the TCMA sets of the 70’s being the second wave. Then you have all that glorious 80’s and 90’s cardboard. Anyhow, this lovely red-bordered 1993 Action Packed card is a welcome addition to the collection. I picked up the Gibson in hopes of pursuing that Ziploc set over time. I know I also have the Brooks Robinson from the set. Hooray for food issues!

Thanks for the trades, Ryan! Let’s put another one together soon.