by MarcPosted onAugust 6, 2018July 8, 2019
Jon from A Penny Sleeve For Your Thoughts ran into a fat stack of recent buybacks at a card show around a month ago. If I recall properly, it was somewhere in the neighborhood of 115-130 cards. Without hesitation, he snapped them up and in a move of generosity, offered to help out fellow collectors on Twitter. I bit, and asked if he found any Astros. 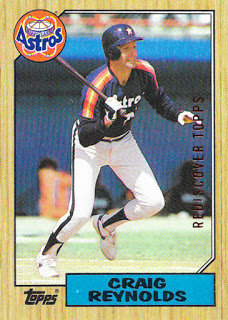 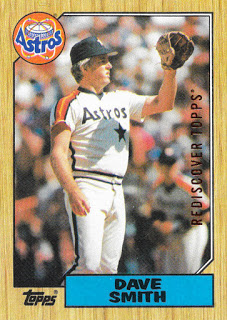 Jon did indeed find some Astros, and he was more than happy to send them my way. We begin with a pair of 1987 Topps, emblazoned with a bronze Rediscover Topps foil stamp. I started rediscovering Topps back in 2012, when I first dipped my toes back into the hobby. Back in 1987, the Astros were coming off one of their hottest seasons to date, having won the NL West and then dropped the 1986 NLCS to the Mets. Craig Reynolds had been a secondary shortstop and bench infielder who managed to get into 114 games, putting up a .249/.278.348 slash line, scoring 32 runs on 78 hits and 12 walks. His mediocre .623 OPS was good (bad?) enough for a 73 OPS+. Meanwhile, Smith had established himself as the closer, finishing 51 of the 54 games he entered and garnering 33 saves in 56 innings pitched to go alongside a 4-7 record. He surrendered 39 hits and 22 walks – not bad, but not ideal, and struck out 46 batters. His 2.73 ERA was good enough for a 132 ERA+ mark. The Astros weren’t able to repeat their success in ’87, however, falling to third in the NL West and finishing 14 games back. 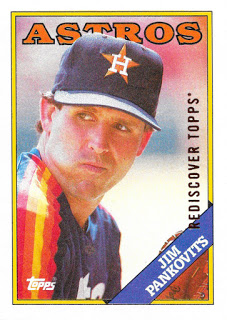 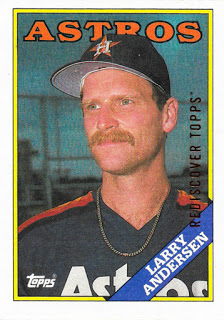 The next pair of buybacks comes from the 1988 Topps set – again stamped in bronze foil. As I said, 1987 hadn’t been too kind to the club, as they went 76-86. Jim Pankovits was a utility infielder who got into 50 games and had 67 plate appearances. His .230/.299/.311 slash line wasn’t much to speak of, but he somehow had 35 pinch hit appearances. Larry Andersen was either the long man or the mop-up guy out of the bullpen, racking up 101 2/3 innings pitched in 67 games, and finishing 31 of them. His 3.45 ERA was actually good enough for a 114 ERA+, which really puts Dave Smith’s 1987 season in perspective. Smith’s 1.65 ERA amounted to a 239 ERA+. Andersen would of course go on to be the centerpiece of one of the best trades in Astros club history. 1988 was an improvement, at least as far as the club record went – they finished 82-80. Unfortunately that was only good enough for 5th out of the 6 teams in the NL West. 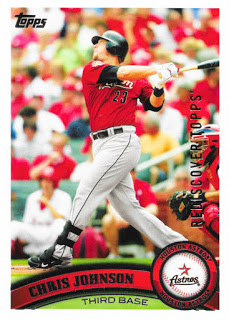 The final buyback in the envelope was a Chris Johnson from 2011 Topps. Chris got the gold foil treatment, which is probably the nicest thing that could have happened to him here. The ‘Stros were in the beginning of their lowest point, going on to a 56-106 season in 2011, the first of three consecutive 100-loss seasons. Fortunately, Chris only had to endure the first year and two-thirds of that mess, getting traded away to Arizona at the deadline for a guy that would never make it out of high-A and Marc Krauss, a quad-A hitter who the Astros tried with little success to get to stick at first base.

But hey, these are happier times! And my mailbox was happy to see these buybacks! Thanks again Jon for your generosity. I dropped a little something in the mail for you today.