It’s storytime, so pull up a chair. This one is a doozy.

I’ve posted before about picking up cards of the Brubakers who have played major league baseball – Bruce, a journeyman pitcher who got into (literally) a pair of games in the 1960s, and Wilbur Lee “Bill” Brubaker, who played for the Pirates in the 1930s. In fact, some of my best pickups from the past year were Bill’s cards.

I first learned of Bill when I was searching for something in my dad’s office closet a few years back, probably looking for padded envelopes which I’d stashed in there whilst we were briefly living with my folks. I noticed a few cards in holders out on a shelf, and picked them up to leaf through them and see what they were. To my surprise, I found a Brubaker! It turned out to be Bill’s 1940 Play Ball card, and I was pretty shocked to see he had played for Pittsburgh, where my dad grew up. The thought crept into my mind, of course: could he be family?

I never did the due diligence required to figure it out, but after adding a few cards of Bill over the past 14 months – including my own copy of that 1940 Play Ball – I decided it might be time to finally check. For the past couple years, sometime around Thanksgiving or Christmas, when all the family get-togethers are happening, my wife and I have opened trial accounts on Ancestry.com and done some family tree building. Previous excursions led to some old photos of my great-great-grandfather Noah Franklin Brubaker and his wife and kids, something I didn’t even know existed. 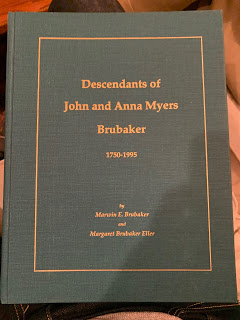 But this year, I had a mission: try to find Bill and/or Bruce. The thing is, there is a pretty good established Brubaker lineage when it comes to us stateside. My great-uncle Marwin and great-aunt Margaret put together a large tome of the family line – a genealogy book that’s about the size of a Webster’s Dictionary (remember those?) and begins with John and Anna Myers Brubaker, starting in the mid-1700s. What’s more, Bruce and Bill come from the right region, with the Brubakers coming to Virginia before settling and branching out in Pennsylvania / Indiana / Ohio. Bill was born in Cleveland, Bruce was born in Harrisburg, PA. Both were plausibly in the family tree, albeit probably distant.

After many, many years of work on the book, this labor of love was published in 1996. It’s far from complete – Marwin guessed offhand that maybe 50% of the family was in it at the time, but he’d decided that the time had come to publish a first edition. My father has a copy that was given to his father Otis (Marwin’s brother), and I figured that between Ancestry.com and the book, I might be able to piece something together.

For several reasons, (loud celebrations, amateur fireworks, and gunshots), we left our house on New Year’s Eve and spent the night with my parents in the suburbs. It gets rowdy (and yes, “gunshots or fireworks” is a real game here), and we wanted our daughter to sleep and the dog to not spend an entire night terrified and shaking under the couch. So, whilst waiting for the ball to drop, Dad and I broke out the book and my laptop.

I started out simply by trying to look Wilbur and Bruce up directly. But, there were no direct matches. So, the next step was to try and build out their family trees via Ancestry. After compiling a few generations back, Wilbur’s tree looked a bit more promising. So, I searched for his father Charles in the book. Strike two. But when I went to look for his grandfather, Martin, I came across a possible match. The only info in the book was a birth year – Martin was a dead end there. But, the book told me who his siblings and parents were, and the Ancestry records matched up – I had a hit! This meant Bill was probably distant family!

The next step was to figure out just how distant that was. So, Dad and I traced back in the book. Much to our surprise, we learned that Martin’s father Daniel just so happened to be the brother of Noah’s father, Otis.

We were closer than I thought. Much closer, in fact. But what exactly did that make us? Dad and I started adding branches to merge the two trees we’d developed on Ancestry. When we got to Wilbur, I clicked on his profile.

Yes, Bill and I are third cousins. The “twice removed” notes a two-generation gap exists between he and I, so Bill would be Dad’s third cousin once removed. Oh, and there’s a photo of Bill with the Pirates, to boot!

While Dad went upstairs to find his copy of Bill’s card, I decided to do some more sleuthing and see if I could find any other pictures of Bill. That led me to a rather shocking discovery, as I hadn’t anticipated finding all that much. But what I came across was very cool indeed. 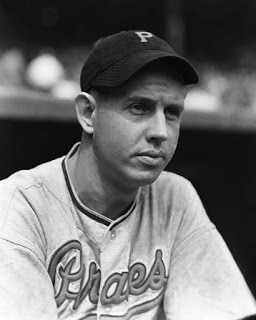 There were several images of his cards in the search, with a couple I hadn’t seen before – including a TCMA card from the 70’s. But this photo here was what really got things going – a nice portrait of Bill! I clicked through to the page and discovered it wasn’t just any photo, but rather it was a shot taken by none other than Charles M. Conlon.

There was a Conlon shot of Bill! My semi-distant relation! For what it’s worth, this one comes from 1939 – the script on the uniform gives it away.

Oh, but it got even better, because there were more! 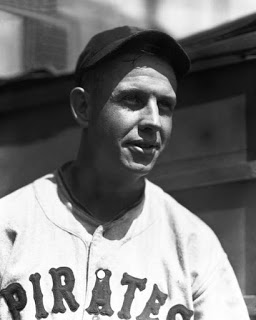 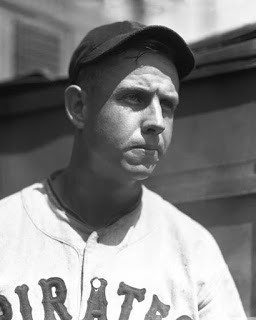 These two are not Conlon or Bill’s best work, but they come from 1937. 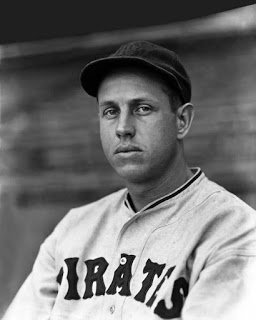 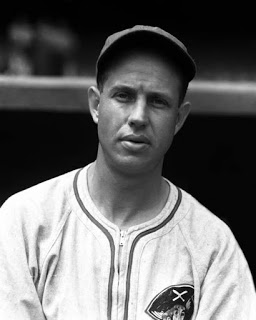 But these, these are beauties! That one on the left is from 1936 – Bill’s best season with Pittsburgh, which you could arguably call his breakout. The one on the right is from 1940, which I determined due to the logo on the jersey. 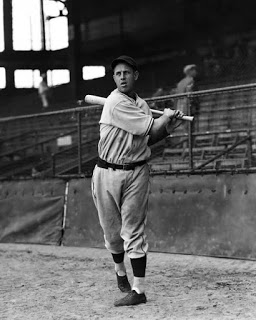 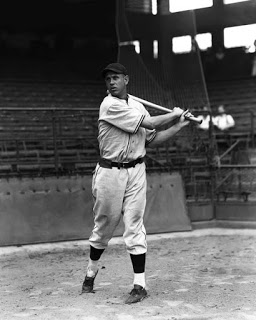 There were batting poses too! Both of these are from the Conlon shots and were dated to 1936, albeit I have no real way of knowing. The shot on the right is actually used for his card in the 1994 series of the Sporting News Conlon Collection set. So cool! 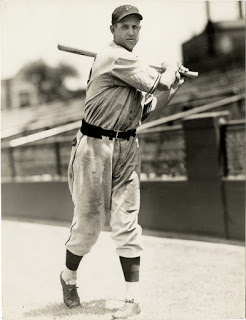 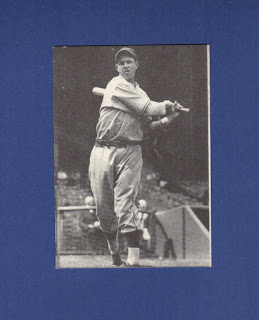 Here’s another pair of images I found online. I’m not sure the source of either of these. The one on the right is from an eBay listing for that TCMA card I mentioned (the blue is just background). I’ll have to pick one of those up someday.

Dad had come back downstairs, and we were looking at the pictures and talking about how it was pretty neat that Bill was actually a relative. He told me that when he was a kid he got asked several times if he was related to “the Brubaker that played for the Pirates,” to which he would shrug and say “probably?”

He’d also located his 1940 Play Ball, and was reading the bio on the back aloud. I had already mentioned the difference in the backs, and that I needed to add a “Superman back” variant as I’d picked up the normal version.

“Check this out,” Dad said, “it’s the Superman version.”

I said something to the effect of “Cool! I’ll have to keep my eyes peeled for one.” They are rarer than the regular backs, but not rare in the strict sense. I’ve seen them on eBay for around twenty bucks. 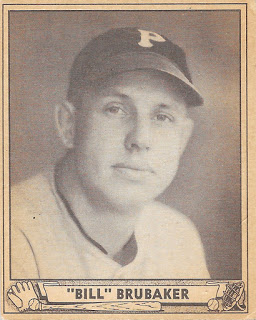 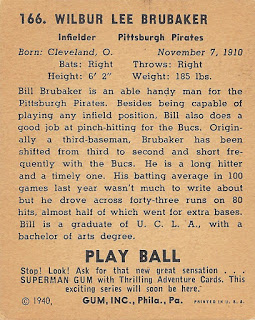 Dad looked at me with a grin. “You can keep that one,” he said.