There’s plenty to post around these parts – it’s time for another State of the Blog entry, a couple fun finds, some Twitter sale highlights I didn’t get to, and still some trades from September through December. In fact, there are 19 overdue trade posts still to be written, so I hope you’ll understand if I just start plowing through these in short order.

For now, though, let’s take a look at the first trade to arrive in the new year! It’s a short but sweet one from Vern, who goes by gormanvj over a TCDB. I sent him a pair of Frank Thomas parallels that I pulled last year. 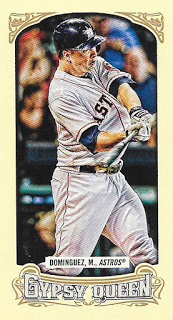 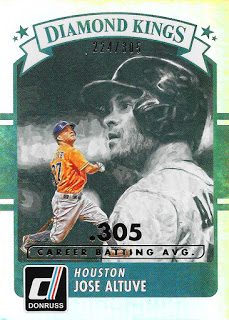 In return, I picked up a couple Astros from a few years ago. First up was a mini of Matty Derp-minguez from 2014 Gypsy Queen. I love it when I can pick up more of the multitude of Astros minis out there. The other card was a Career Stat Line parallel of José Altuve’s Diamond King card from early in the 2016 Donruss set. It’s numbered 224/305, the significance being his .305 career average at the time. He’s pulled that up to a .316 since then, even with a somewhat “middling” year in 2018 in which he hit, well, .316 and played on a broken kneecap. 2018 also featured his first trip to the DL, limiting him to 137 games and just 169 hits on the season, the first time in five years that he hadn’t reached the 200 hit plateau, and probably ending his chances of matching Ichiro Suzuki’s 10 straight 200-hit seasons.
Nothing like a sweet little trade to kick off the year. Thanks Vern!