by MarcPosted onApril 4, 2019July 14, 2019
What’s this? A TTM Report? Yes indeed, I caught the bug again and stubbornly refused to quit sending out to Spring Training, despite what seems to be an ever-decreasing success rate of players signing. I’ve still got seven requests outstanding – who knows if they’ll ever come back, but that’s the fun of it, right? That oh-so delightful surprise of an envelope arriving at your door, unsure of whose cards are inside. I did get five ST requests back, along with a few more across the past month, so let’s take a look at what I found in the mailbox.

Ryan Pressly: 1/1, 18 days.
Once the 2018 Starchives set was finalized and printed, I wanted to try and get some of those beautiful customs signed. I haven’t sent many out – mainly because I’d neglected to print a third set of the roster cards (one for the set, one to get signed, one for the player to keep), but Ryan Pressly was among the initial overprints as he was supposed to be at February’s card show. I dashed a letter off to Astros ST and sent a pair of extras for him, which he kept. Pressly was quietly one of the best relievers in baseball last year, putting up phenomenal numbers while mainly manning a setup role. That lack of saves keeps him below the radar, but he’s deadly out of the ‘pen – and on my fantasy team this year. We’re using combined Saves and Holds in order to give the middle relievers some extra value in our league, and Pressly looks like he’ll prove to be an excellent pickup for the season. 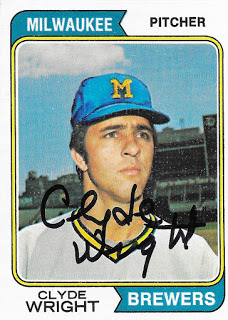 Clyde Wright: 1/1, 820 days.
Yes, you read that Wright: This airbrushed 1974 Topps took over two years to return to my mailbox. Why get this one signed? Well, it just so happens that Clyde here is the father of another Wright, another pitcher with whom you’re probably more familiar. That would be Jaret, former Indians prospect of the late ’90s. I wrote them both on the same day in December 2016, and while Jaret got back to me rather quickly, his dad let this one sit a while. I enjoy putting together the baseball families, so this slides into a little autograph mini-collection. 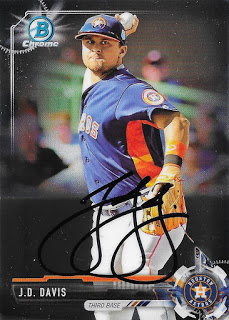 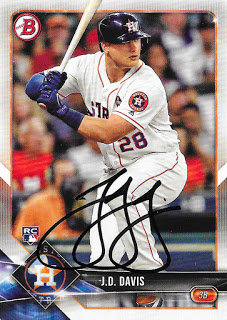 I was pretty bummed when J.D. got traded away to the Mets, as he’s been fun to watch. His bat hasn’t quite come around, but he’s mashed in AAA and I think he just needs some consistent playing time to make the necessary adjustments at the major league level. Plus, he was an outstanding collegiate pitcher, and in Spring Training the Mets were making some noise about using him on the mound as well as in the field – something I thought Houston should have done with him. He did rack up three relief appearances in his time with the Astros, but all in mop-up duty. I’d had success with him previously, but on some 2014 Bowman Draft cards well before his debut. It’s nice to add a signed card of him from an actual big league game (that 2018 Bowman), instead of just some spring training shots. 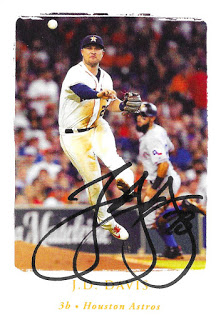 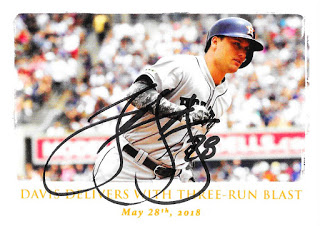 Oh, and because I knew J.D. was good via the mail, I made sure to send his Starchives cards as well. I’d printed extra copies in my first printing for this, and he hung on to the pair of extras I sent his way. 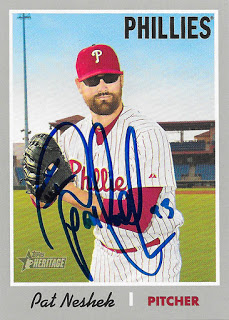 If you tell anyone in this realm of the world that you’re thinking about getting into TTM, the first name they’ll tell you is Pat Neshek. Write to Pat, and it’s a guaranteed success – and it’ll come back quick. You’ll get the bug, and then you’re hooked. I’ve written him before for my Astro-graphs collection, but when his Lowell Palmer-esque card arrived in 2019 Heritage, I just knew I needed to get him to sign a copy. So when I finally ripped some Heritage and landed this beauty, I dashed it off to Pat at Phillies ST right away. 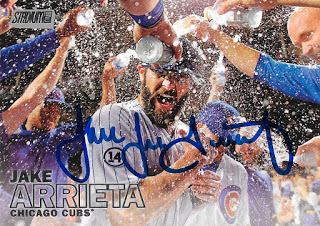 I also have Pat to thank for this wonderful Jake Arrieta signature. You see, Pat’s a collector as well. No matter where he is playing, he gets his teammates in on some Spring Training TTM action, collecting their various prices and essentially acting as the mailman for anyone who is willing. If you’re an SCN member, Pat posts a list there every year with the fees his teammates are charging. You send the items and money to Pat, and he makes the rounds in the clubhouse every few days.

I think that this photo comes from a postgame celebration after his 2015 no-hitter, but I could be wrong. I’m a bit too busy to do the research. At any rate, it’s a fantastic card of the NL Cy Young winner, and I’m happy to add a signed copy to the collection. Many thanks to Pat for the assist! 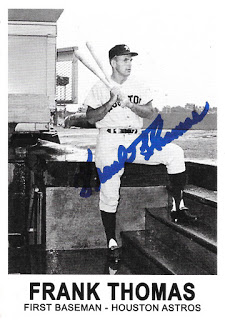 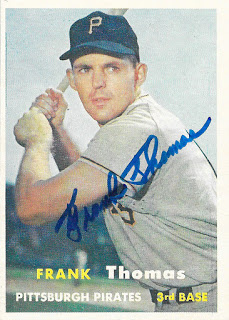 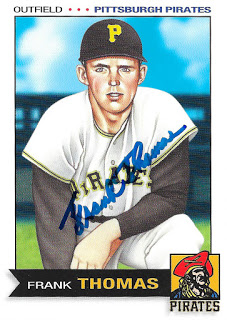 Frank Thomas (The Original): 3/2, 9 days.
“The Original” Frank Thomas has been on my list of guys to write for quite some time, thanks to his brief stop in Houston in 1965 – and I mean brief. Frank got into 23 games with the Astros, having already appeared in 35 for Philly before becoming persona non grata for punching Dick Allen. He’d move on to Milwaukee before the end of the ’65 season, appearing in 15 games for the Braves.

I’d been trying to find a color image of Frank in an Astros jersey, but it’s just not out there. I’d tried my hand at colorizing one of the other few images of him in a Houston uniform, but it wasn’t working out right. Eventually, I settled on this great shot of him on the dugout steps during a rain delay, dropping it into a 1960 Leaf template I made. I’d included a spare copy for him, and a 1957 Topps, which is just a beautiful set, along with a donation (Frank is $5 per card). As a thank you, he includes one of his own customs if you’ve sent in a donation. This, interestingly enough, is slightly oversized – about the dimensions of a ’54, although I hadn’t compared them directly. 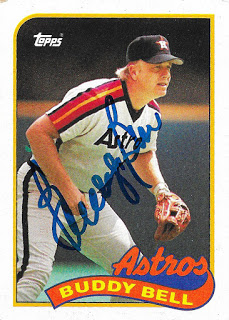 This was one I couldn’t believe. I’d written Buddy via the White Sox for the past few springs, to no avail. Perhaps Chicago is just terrible about actually getting them the mail, or maybe he just didn’t care to sign. With his son taking over as Cincinnati’s manager, however, Buddy was in camp with the Reds, and I was quite surprised to see returns popping up on SCN. I grabbed the only spare Astros card I had of Buddy laying around and speedily wrote a letter, crossing my fingers. He doesn’t have many Astros cards – a horrendous airbrushed ’88 Topps Traded and a few ’89 appearances, and while I’d prefer the Score where he’s turning a double play, this was what I had on hand. I was quite happy to add him to the Astro-graphs binder, though, and perhaps I’ll try again if he’s still signing via the Reds during the season. There is also that ’81 Fleer that I’d love to add. 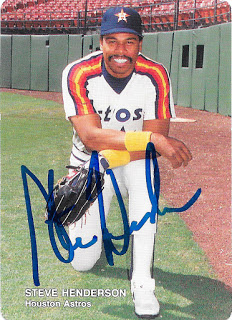 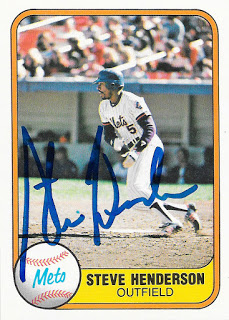 Speaking of short-term late-80’s Astros and ’81 Fleer, I nabbed another guy that fills both of those slots: former outfielder (1988) and coach (mid ’90s) Steve Henderson. His Mother’s Cookies appearance is his lone Astros card, and I’d earmarked this to get signed a while back. I was particularly excited to get another lovely ’81 Fleer in the books as well. Steve’s wide action shot of him sprinting down the line is just fantastic. 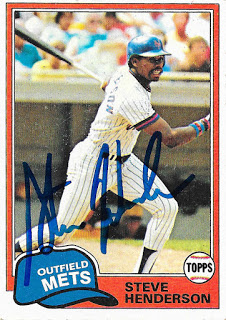 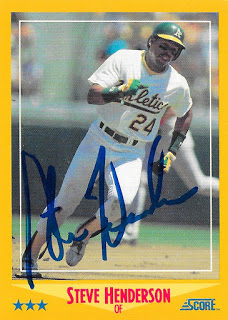 He also signed cards from two more sets I enjoy, an ’81 Topps and ’88 Score. These both lend themselves well to signatures, so if I’ve got a spare laying around for someone I’m planning to write, I’m likely to toss it in the envelope. I wrote Steve care of the Rays, where he’s one of their Hitting Coordinators. 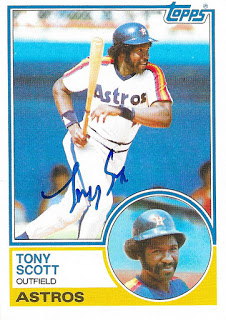 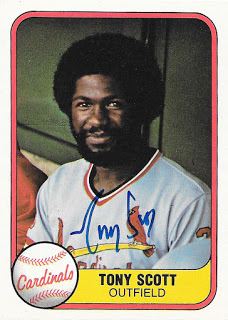 Okay, these last two weren’t traditional TTMs, and they actually showed up in these first few days of April, but no matter. We’re doing an autograph roundup, so here goes! I landed a somewhat tough Astro-graph in Tony Scott, who spent parts of four seasons with the ‘Stros in the early 80’s. Scott and his glorious afro are also in the ’81 Fleer set, and since the signing was fairly inexpensive I made sure to add that as well. 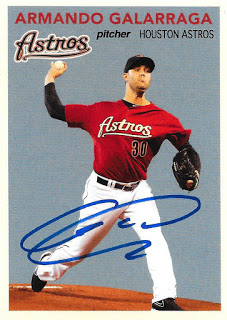 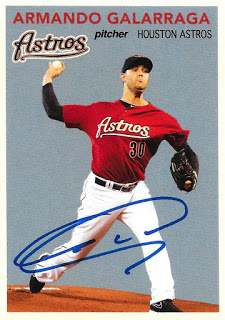 Armando Galarraga: 2/1, private signing.
The other private signing I partook in recently was for Armando Galarraga, he of the infamous “28 out” perfect game. Galarraga wrapped up his major league career with a brief stop in Houston in 2012, going 0-4 in five starts and allowing 20 runs (although let’s be real, that was some pretty bad baseball behind him) before being released in late May. He went ahead and signed the spare custom I’d included for him to keep, which gave me a bit of trade bait for Billy over at Astros A to Z. He’s much farther along in this project than I am, by the by.

It wasn’t all roses in March, though – I did have two envelopes come back with unsigned cards. I’d written to Robbie Wine, son of Angels outfielder Bobby Wine and short-term ‘Stro in the late ’80s, via a training complex he works (worked?) at in Amarillo. Those came back blank, with no note. I’ll try one more time with a single card, but perhaps he’s just moved on from the facility.

The other blank return was sadder – I’d written former Pirates pitcher Al McBean a bit over a year ago. This one did come back with a note saying that Mr. McBean was unfortunately unable to sign anymore. I hope it’s just something with his ability to hold a pen and not something debilitating. I’ll have to file that card back into my ’68s for an eventual set build.

On the bright side, though, it was a fantastic month! I added 6 new Astros! I got a couple more of my 2018 Starchives cards signed! I added another signed ’57 – there aren’t too many of those guys left now, and they look fantastic signed – and two more ’81 Fleer cards! I added a Cy Young pitcher with No-Nos under his belt, and two more baseball family signatures – Wright and Bell. Not too shabby at all.