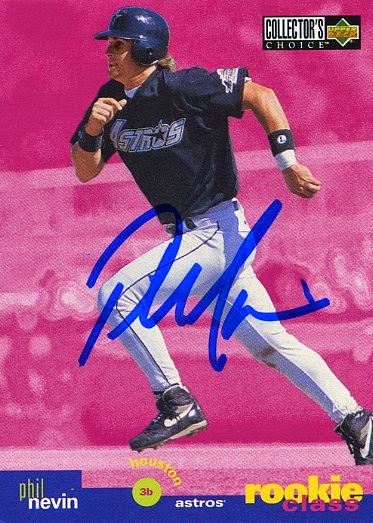 It’s time for another dive into the mailbag returns. This is really what came back in about the last week and a half, but I’m not going to get picky about the title.

As bad as the week was for the Astros, my team-centric TTM collecting made another nice jump in progress. Unfortunately the club missed out on signing their #1 pick (and subsequently their 5th and I believe 21st round picks), losing three potentially great high school arms, taking a fairly big PR hit – at least in the short-term – along the way, and generally being regarding in the press as TEH ASTORZ once more. Sigh.
This week’s returns started off with another former first round draft pick of the club, Phil Nevin – whom you might count as another poor decision. Yes, it’s true: in 1992, the Astros (AND four other clubs, by the way) passed on the opportunity to draft Derek Jeter in the first round, allowing the Yankees to take him with the sixth pick. 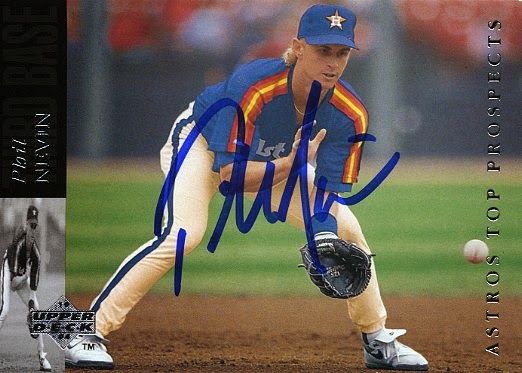 Nevin, however, was supposed to be a scout’s dream, a can’t-miss guy – winner of the Golden Spikes award for the best college player of the year. (Side note: the Astros second-round pick this year was A.J. Reed, who was just awarded the Golden Spikes. Hopefully he does well.) Unfortunately for Nevin and the Astros, some of the ways the club management (read GM Bob Watson in this case) handled him rubbed Nevin the wrong way, and some frustration and anger issues took over. These included being blocked by Ken Caminiti in his first couple years, dealing with expectations and position shifts, and then refusing to play with replacement player “scabs” during the 1995 pre-season, which gave way for Dave Magadan to be the opening day third baseman. Nevin made 18 appearances for the club before being sent along to the Tigers in exchange for Mike Henneman in 1995.
I sent these to Phil via the Reno Aces, where he’s a manager. They returned to me in 23 days. 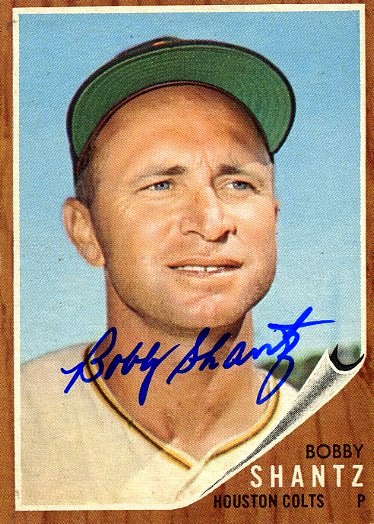 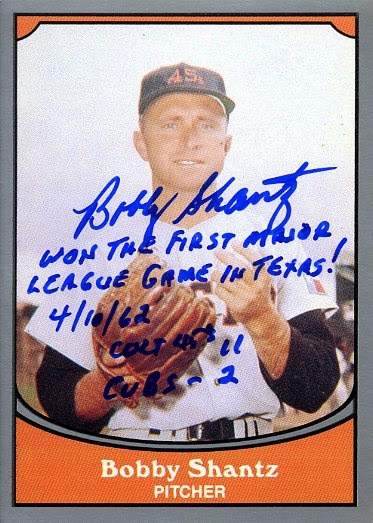 Next on the list of franchise firsts is longtime pitcher Bobby Shantz, who was the opening day starter for the Houston Colt .45’s in 1962. As indicated by the sweet inscription on the 1990 Pacific Legends card on the right, Shantz was the winner of that game – the first major league game in Texas – an 11-2 rout over the Cubs. Not only that, but in that appearance Shantz threw a complete game! 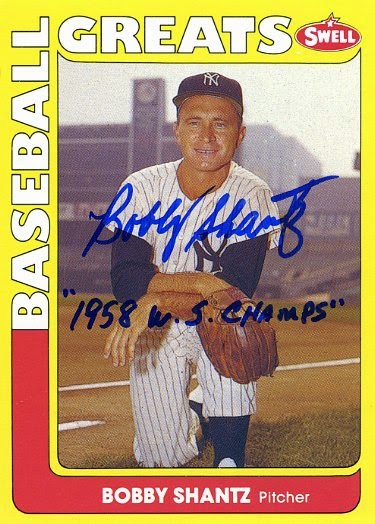 Shantz’s tenure with the club was short – by May of 1962 he had been sent to the Cardinals in a trade for Carl Warwick. His career would wrap up in 1964, but his story had started long before that. After two years in the majors, he took up the knuckleball in 1951. In 1952, after winning 24 games, he won the MVP award despite the A’s finishing in fourth place. He had a nice stretch with the Yankees, including a championship in 1958.
Along with these cards (which aside from the 1962 Topps all came from P-Town Tom’s delightful group break – thanks!), he’d written a note on my letter answering a few of my questions. In regards to the knuckler, he said it was very tough to master – and that he only threw it when he had two strikes, making it a very effective pitch. He named his favorite teammates as Alex Kellner of the A’s and Bobby Richardson of the Yankees. And to top it off, he noted that in 1951 & 1952 he won a total of 42 games – an astonishing 40 of which were complete games.
Shantz is a great signer, by the way – I’ve seen a number of success from him and they’re always a short wait. My cards made it back in just eight days. 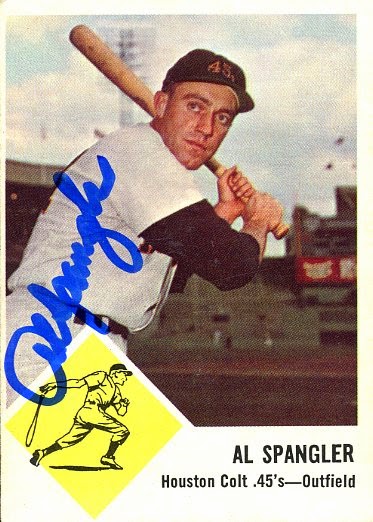 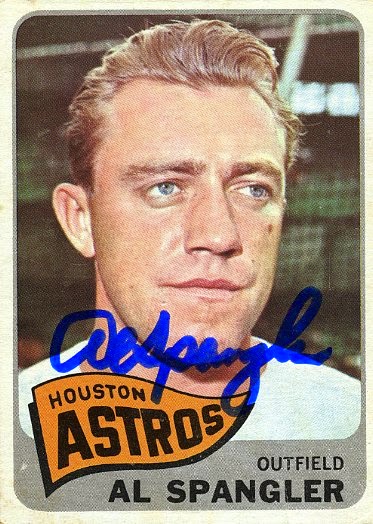 Finally, I opened up the mail today and found yet another return that fit the “franchise first” theme I’d already planned for this post. These two came back from Al Spangler in 28 days.
Spangler was picked up by the Colt .45’s in the expansion draft from the Milwaukee Braves, and was in center field for that 11-2 victory over the Cubs. In fact, he had the second hit in franchise history.
“But wait,” you’re thinking, “you said it was a series of franchise firsts!”
Yep! Spangler’s hit was in fact three franchise firsts – the first extra-base hit, the first triple, and thanks to a leadoff single by Bob Aspromonte in front of him, it resulted in the first RBI for the fledgling club.
I was a little hesitant to send off that ’63 Fleer – it’s the only one I have, meaning I need a duplicate for my franchise collection, and it’s such a cool and sought-after set that I sometimes worry about finding another inexpensive copy. But I kept thinking about how cool of a set it is, and how great it would probably be signed, so I sent it anyway. As for that ’65 Topps – how about handsome young Spanky?! He certainly benefits from the lack of cap, due to the franchise’s likely uncertain name at the time of the photo.
All right, that’s all for me. I’m going out of town for a week – I’ll be in Nashville to see my brother and his girlfriend (my wife actually flew out this morning, but I needed to work a couple extra days). Among the many stops, I’ll hopefully get another digging session at Cards-R-Fun, and we’ll possibly get to see the visiting Oklahoma City Redhawks – aka the Astros AAA club – take on the Nashville Sounds.
I really can’t wait for Sunday, though – my brother plays in a vintage baseball league, and we’re going to see his game! I’ll definitely have pictures from that – these guys make their own bats and use lemon peel balls and wear period-style uniforms. So cool!
– Bru

0 Replies to “The Week in TTM: Three Houston Firsts”