Two weeks ago I stopped by the LCS, just popping through to pick up a pair of 800 count boxes to help sort out some of the collection. Well, I happened upon a box of 25 cent packs, nearly all of which were assorted Topps oddballs from the 1980s. If there’s anything that is certain to immediately pique my collecting interest, this is precisely it.
So I plunged my hands deep, sorted out the wheat (which we’ll see) from the chaff (packs of ’89 Donruss and ’90 Topps), and plunked down something in the neighborhood of 15 bucks for a swath of packs.
We’ll start off with some 1984 Topps Rub-Downs. These are pretty stellar as far as oddballs go – I was a few years too late for these, but I can just imagine covering all of my school folders with these. I’d come across the sheet featuring Jose Cruz before, but I was pretty excited when one of the first packs I cracked revealed The Ryan Express. 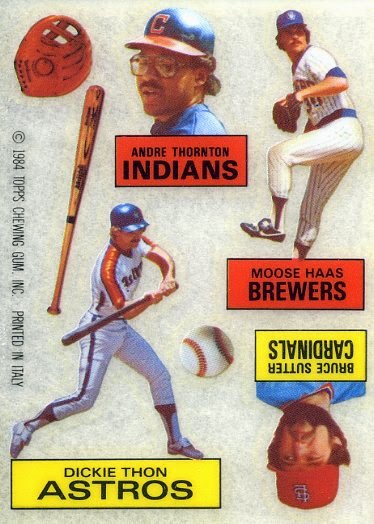 How’s about a pair of HOFer’s here on the left? My apologies to Bruce for flipping him upside down, but Dickie Thon is the star of this set on the right. If Thon hadn’t eaten a fastball with his face, he might have joined Bruce in the Hall. 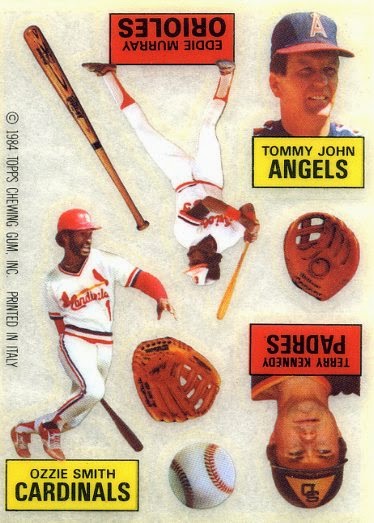 Again, the only one worth displaying upright here is the Iron Man. That group on the right ain’t too shabby either. 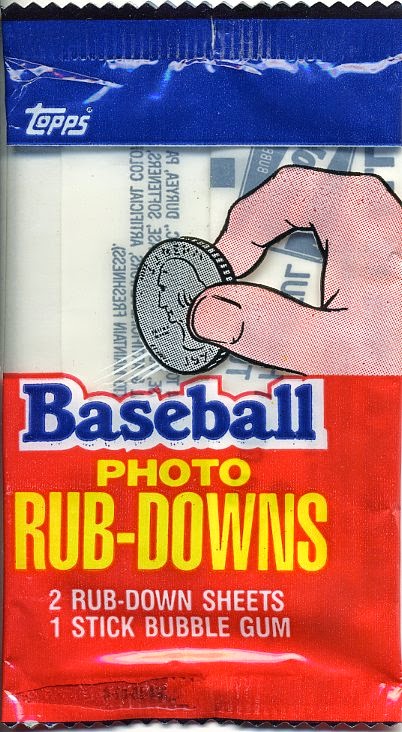 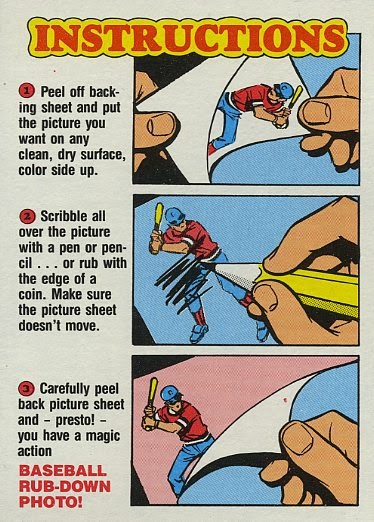 Before we move on – let’s take a gander at the packaging real quick. Each of those packs came with an instruction card – and yes, I may try out an extra rub-down or two to see if they are still good.

What else was in the bin? Minis! These specifically are UK Minis from 1988. I grabbed a dozen or so of these packs, and managed to put about half of the set together – which has of course prompted me to try and put the whole thing together. I’ll be adding a column to the want list soon. As for the samples – look at these two great swings on either side of El Toro. 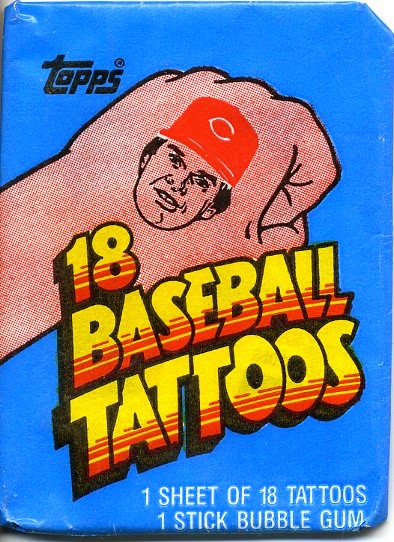 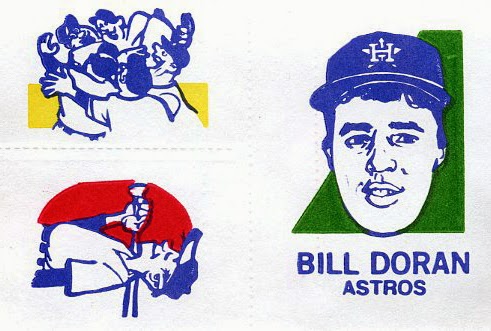 Next up: 1986 Topps Baseball Tattoos. Oh man, these just look ridiculous – which is also perfect for an oddball. Like the package says, these came in one long perforated sheet of 18 tattoos, along with what is now a wretched stick of gum. I find it hard to believe that these actually worked properly. I scanned several of these that I liked, and flipped them over for the post. 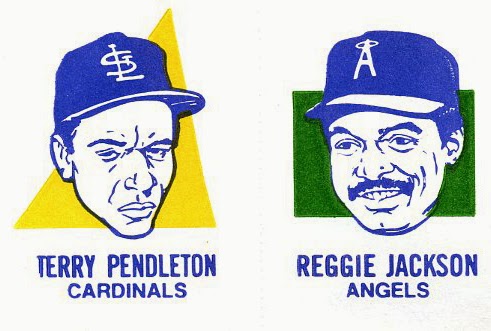 Terry looks thrilled to be sharing this space with Reggie, eh? 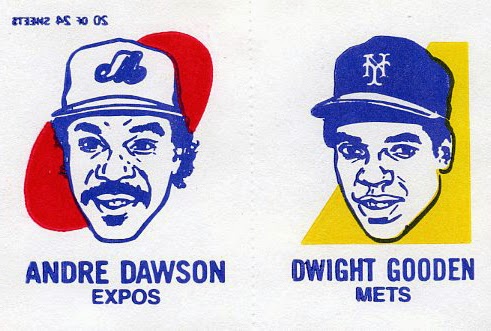 Doc and the Hawk – that’s a pretty nice pair. 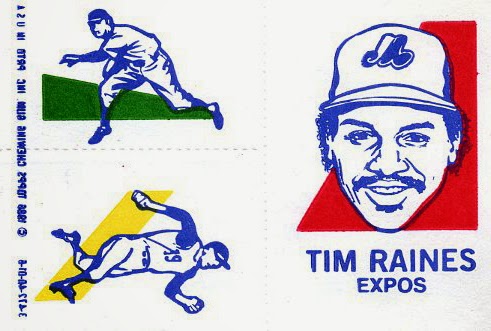 Man, I hope that Tim Raines gets some more serious consideration from the writers for the Hall of Fame. He’s got a pretty nice set of credentials, even if it doesn’t seem like it on the surface.

Mookie looks pretty enthusiastic here, as does that announcer. 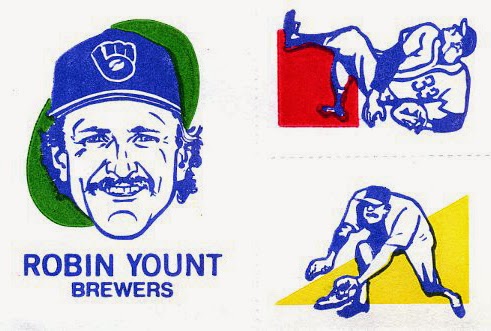 Robin’s got a great smile here two. I love the drawn generic ballplayers in these as well. They remind me of the trivia on the back of the old cards. 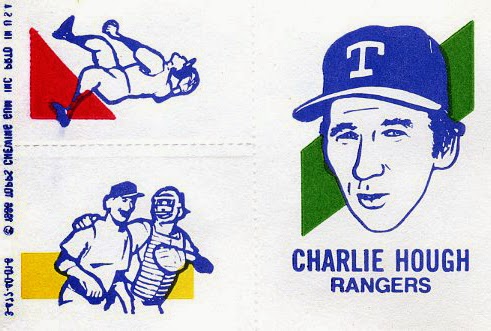 Let’s finish this one off with a knuckler, eh? The catcher/pitcher pair here look pretty jovial as well. Maybe it’s supposed to be Hough and his battery-mate celebrate a strikeout.

Alright, and now for another of my favorite oddballs – 1981 Topps Baseball Scratchoffs. This is another one that I’d found a card of once before, but coming across packs of these seemed like a longshot at this point.

I’m still trying to figure out the best way to store these, by the way – I don’t really want to tear the sheets apart, but part of me wants to, so that I can put my Astros aside for my collection.

The problem here is that each sheet of cards seems to have three or four variants based on the players down the card – and the players at the bottom each at least have two variants of the back. 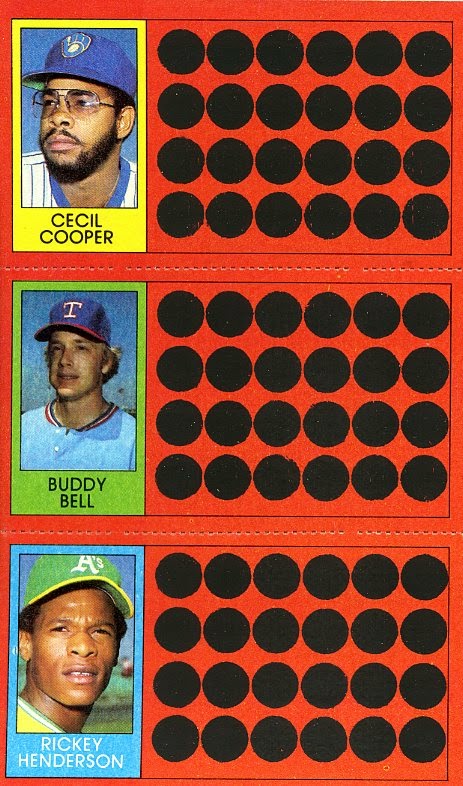 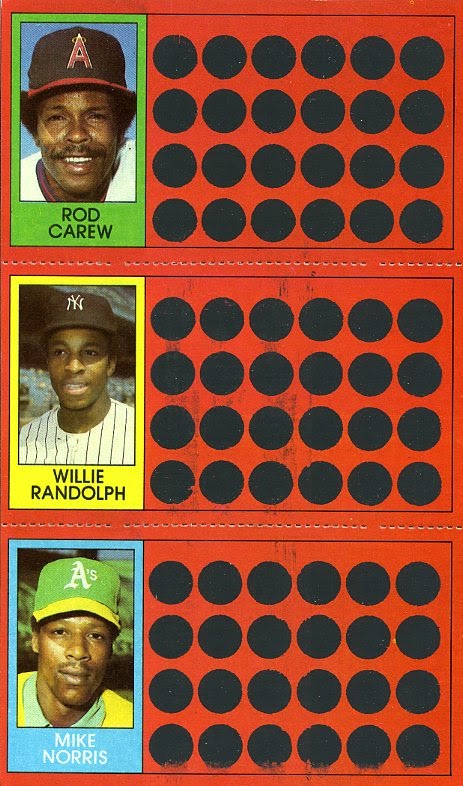 The AL cards are red – here are a couple HOFer’s featured with some other semistars. 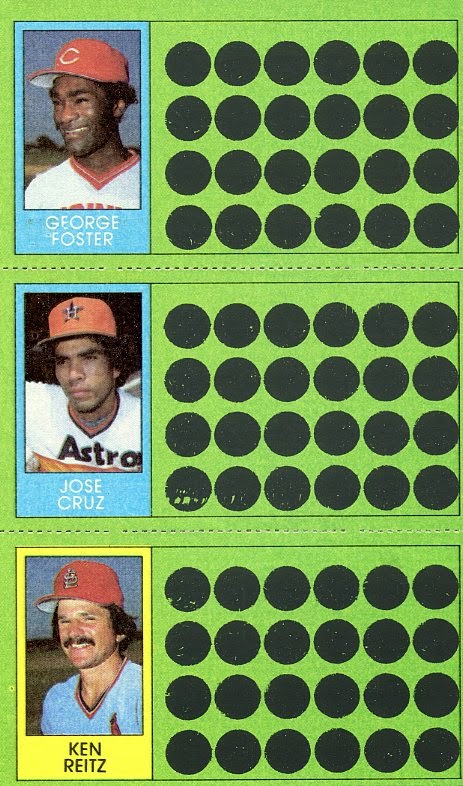 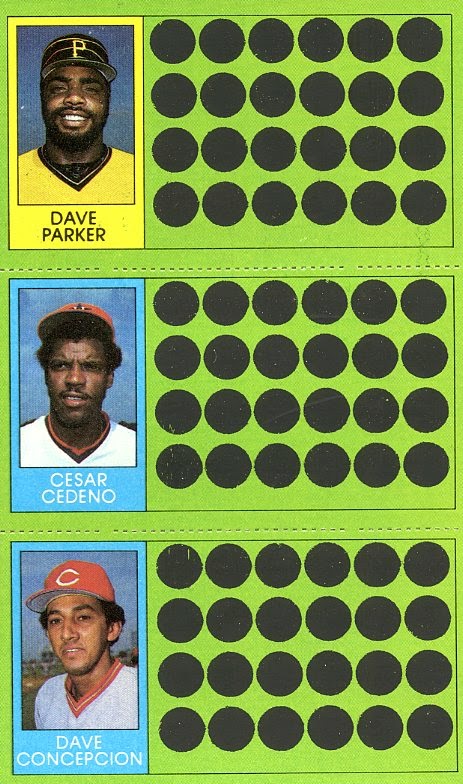 I pulled off the Astros trifecta – in fact I actually did this in one pack when I went back to buy the rest of them from the shop. There are some pretty nice other names in here as well. 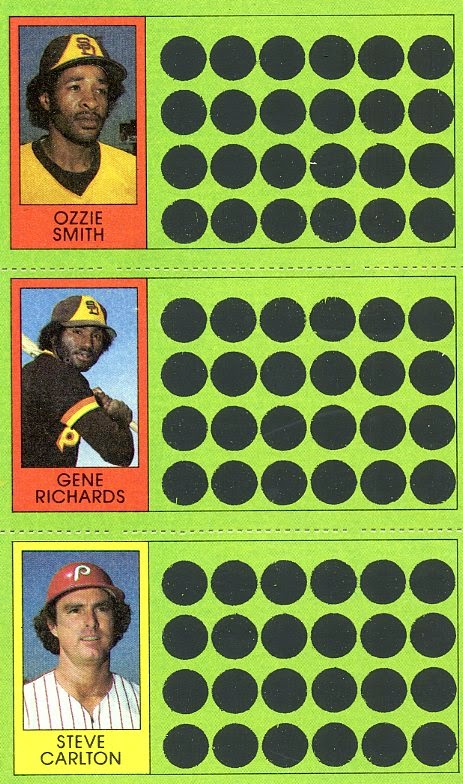 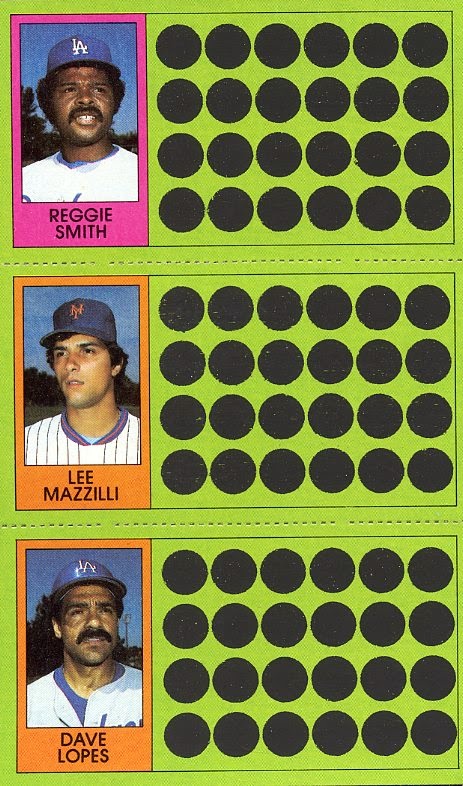 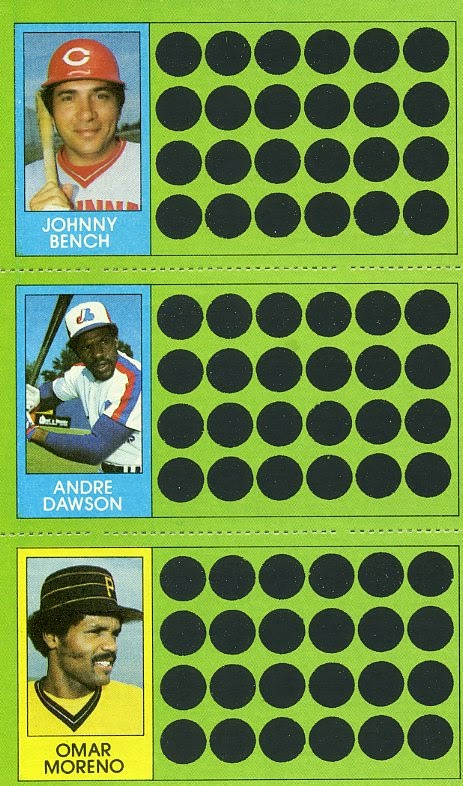 Those Dodgers on the left aren’t so bad, but these last two have two HOFers each – including some sweet uniforms on the Wizard and the Hawk.

Alright, if you made it this far, you’re a trooper. I’ve got doubles from all of these but the tattoos, so hit me up if you’re interested and looking for someone in particular.