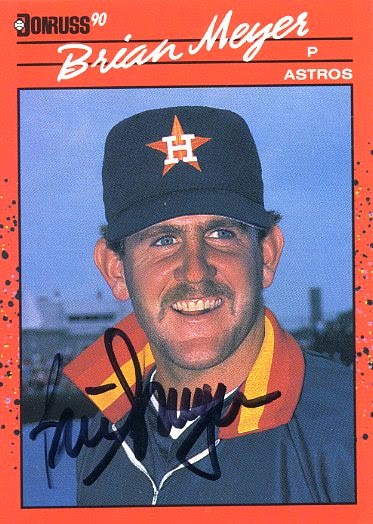 Jeezy petes, knights of Mars! If you get that reference, you’ve just earned extra points in my book, though I already love all of you.
I haven’t been able to post recently due to a tremendously but not quite overwhelmingly busy schedule. I’ve got several trades on which I owe updates (thanks for all of the cards everyone!), several more trades for which I need to pull out some cardboard, and some pretty fun additions to the collection.
Oh, and some autographs have rolled into the mailbox in my posting absence! I’ve got a trio of former players who suited up for my local nine as well as a trio of potential ‘Stros to showcase here today.
First off is Brian Meyer, a short-tenured relief pitcher who appeared in a total of 34 games for Houston across the 1988 to 1990 seasons. Meyer accumulated an 0-5 record with a 2.84 ERA and 2 saves in 50 2/3 innings pitched, issuing 23 walks to his 29 strikeouts. He also suffers from a pretty terrible portrait on this ’90 Donruss card. I sent this off to him at the end of April and it came back about a little over a week ago. 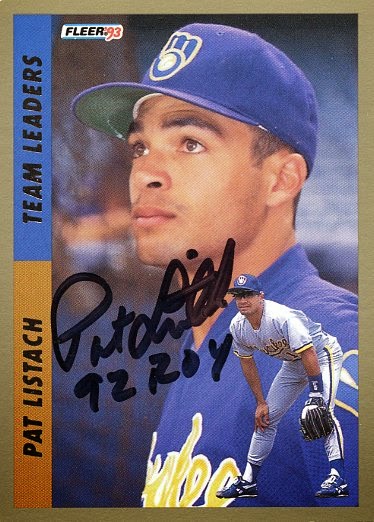 Next up is 1992 AL Rookie of the Year Pat Listach. After a stellar rookie campaign, his production fell off when he was sidelined by knee surgery and was never the same. Listach played his final big-leauge season here in Houston in 1997, serving as the left-handed side of a shortstop platoon with Tim Bogar. Unable to break the Mendoza line in 132 at-bats, Listach was released on July 1st that year and despite being picked up by several more teams, never played another game in the majors.

This season Pat has returned to the club as a coach, and judging on the club’s improvement, has been pretty good at his job, handling third base, infield, and baserunning duties. I’d like to think that he’s one reason that Altuve leads the AL in thefts. I’d sent these four cards to Pat via the club, and they came back in just 11 days.

I had asked if Listach would inscribe one of the cards with his ROY designation. I’d hoped it would be the ’92 Pinnacle, since that’s his actual rookie card, but I didn’t want to be too picky. I’d asked a lot of questions by that point in the letter and I already thought sending four cards was pushing my luck a bit. The ’93 Fleer Team Leaders card is pretty stellar, and I’ve always enjoyed his ’97 Fleer and the headfirst dive into third base. Maybe, just maybe, this ’93 Studio is the first in a quest to get as much of this set as I can autographed. We’ll see. 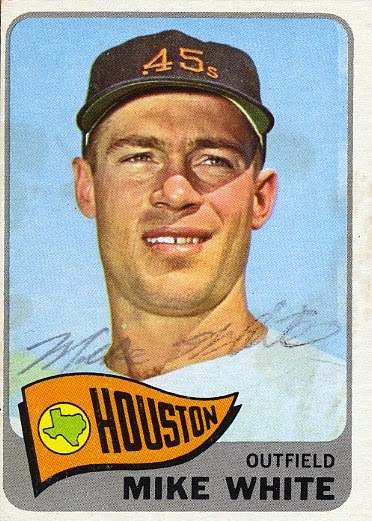 The next success to drop into the mailbox was from Mike White, who spent a total of 100 games with the Colt .45’s and Astros from 1963-1965, with 89 of those occurring in the ’64 season. He managed to hit .271 that year, playing mostly in center field, but was demoted in ’65 after going hitless in his first nine at-bats and never cracked the majors again, retiring in 1969. Mike’s handwriting seems to be going, and unfortunately the pen he used on this great ’65 Topps card didn’t fare so well. I may try to track down another solo card of him, but wouldn’t request more than one more time.

I’ve picked up an old habit of protecting cards with index cards, for a couple reasons. First, I went back to using the smaller envelopes for my returns. Second, however, is that sometimes you’ll get a bonus autograph or two from a kind player. I find that this happens more with the older guys from the 50’s-70’s. Mr. White was kind enough to autograph both of the index cards I’d included. All told, the return took just ten days.

Now on to the future Astros portion of our programming. The recent weeks have seen returns from three pitching prospects show up in my mailbox, each of which has some nice potential. Two of them had mixed seasons with nice stretches, we’ll get to those in a moment.

For those of you unfamiliar with Lancaster’s situation, it’s a bandbox. It’s at altitude in the Cal League, and hitters crush their, so for a pitcher to come out and post shutdown numbers is a pretty big deal indeed. Hader earned himself a late-season promotion to AA Corpus Christi, going 1-1 in four starts with a 10.8 K/9 rate. This week, he was named the organization’s minor league pitcher of the year.

I sent this to Josh via Corpus just after his promotion, and got it back in a turnaround time of fourteen days. Oh, and the chrome card looks way nicer in person than via scan, especially when signed. Apparently the ol’ baby powder trick works pretty well. 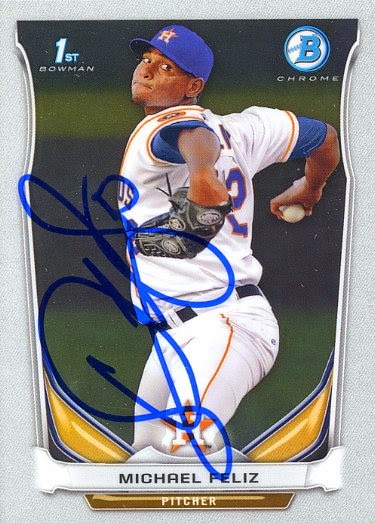 Working in Single-A Quad Cities for the season, Michael Feliz started off strong before flagging a bit. He finsihed with an 8-6 record in 19 starts, putting up a 4.03 ERA, but managing to notch a 9.7 K/9 rate and a 1.37 WHIP. Again, this chrome card looks phenomenal, particularly with the blue ink. I think I’ve figured out a pretty good way to scan these shiny cards after all. This pair made it back to me in just 14 days. 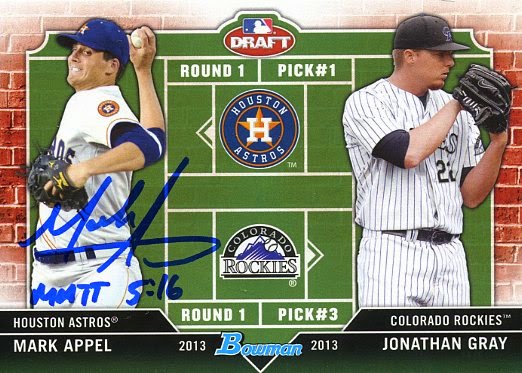 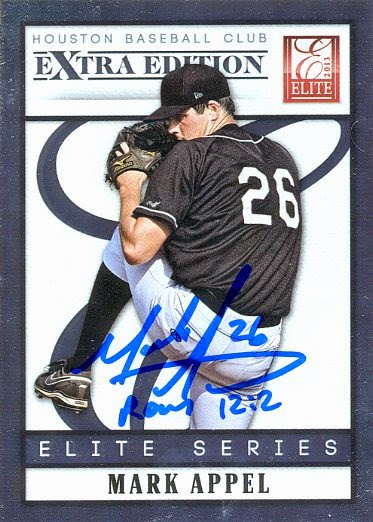 Finally, we have a pair of autographs from the organization’s most talked-about minor league pitcher, Mark Appel. His ballooned stats depict his struggles at High-A Lancaster, but the organization was adamant that he “looked good” and it was just something he’d need to work through. After the hubbub surrounding his mystery bullpen session at Minute Maid Park – which is a huge load of BS and I don’t think anyone on the roster actually gave a damn – Appel moved on to AA Corpus Christi and had several nice outings to finish up the season. He’s slated to pitch in the Arizona Fall League, and pending a nice showing there, I think he’ll start the 2015 season either at AAA or have a pretty short AA stop before getting the bump. If things go according to plan, he might be a late season call-up next year, or with the team in 2016. Mark’s cards made the trip in a total of 49 days. I recall hearing that he stopped returning things at some point during the year and was saving it all up for the end of the season.

Phew! Well, that’s somewhere between three and six names off the all-time Houston roster, depending on how those last three pitchers pan out. I’ll try to make a proper update about the general progress of the project pretty soon.

0 Replies to “Catching Up On TTM: Former And Future Astros”