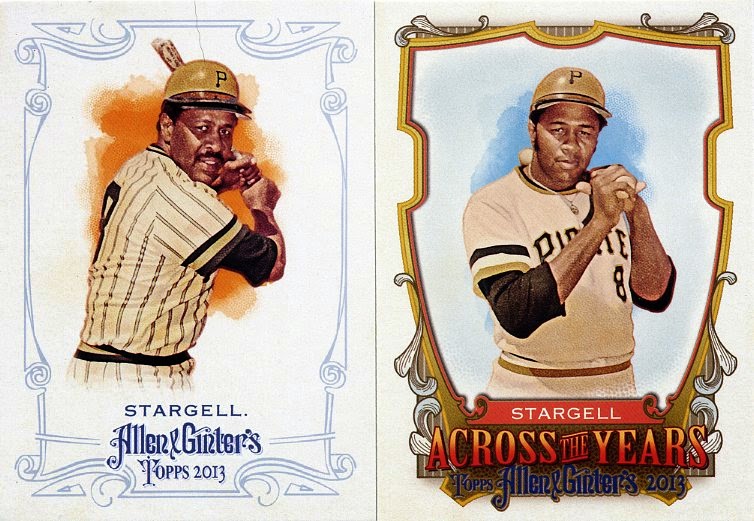 So I’m trying to catch up on all the trades that I’ve made recently. That means that I spent a lot of time digging through people’s want lists trying to find something, anything that I could send their way. I love trading, after all.

I knew Roger of Sports Card Mask-R-Ade was working on A&G, so I popped over and checked to see what I might have. I only found a handful of cards – from the previous set, even, but I figured getting something is better than nothing, so off they went.
Well, Robert blew off the proverbial doors – if envelopes have doors, that is. Inside his package was a plethora of goodies, including these two Stargell’s from 2013 A&G. Yes, I’m an Astros man through and through, but there’s a nice chunk of Bucco’s that are near and dear to me. One day I’ll have to share the story of getting Pops’ autograph when I was a kid.

These Clemente’s were something I spotted on Roger’s bait list.  All three are now happily nested in my Roberto collection. 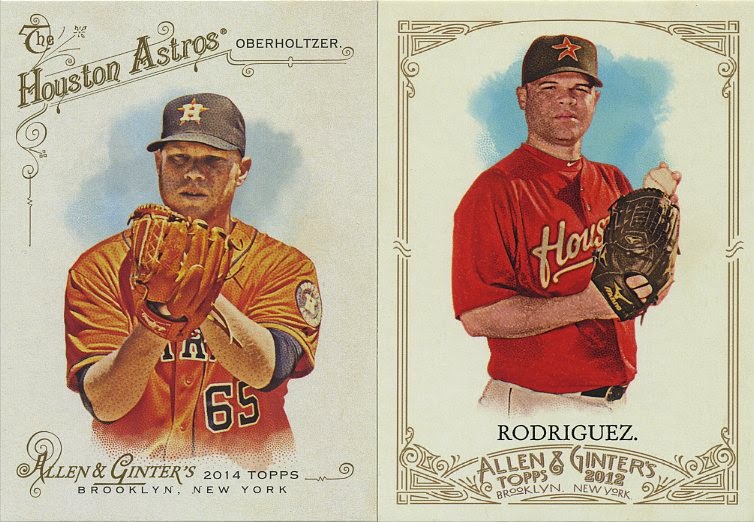 Then there were the Astros. I won’t bore you with everything, but I definitely needed these two lefties from Ginter 2014 and 2012, respectively. I think Obie has tremendous potential, and I love his competitive fire. Wandy was great, and fun to watch – until he wasn’t. Then it was a tale of two pitchers, and you didn’t really want to guess which you were probably getting. 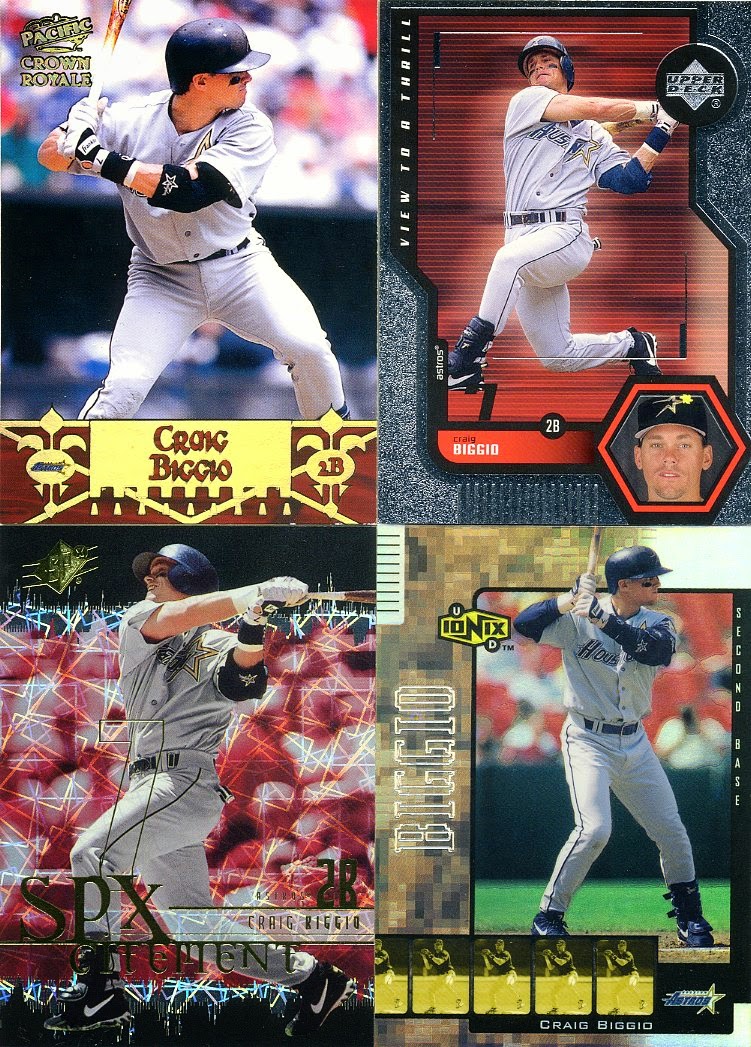 Boom! Roger dropped a nice selection of the soon-to-be first full-time Astro Hall of Famer, Craig Biggio. These shiny beauties were my favorites. That’s a Diamond Knights insert from Pacific Crown Collection in the upper left. I know a lot of you think Pacific and the later 90’s Upper Deck sets are crazy, but I friggin’ LOVE these cards. Ionix, SPx, HoloGrfx, gimme more! I wish there was some of that stuff going on today, but noooooo, Topps has to be all party pooper about everything and give us bland borders and reuse the same photos 80 times. Ok, maybe that’s not entirely fair, because Finest and Stadium Club look pretty nice, but jeez, I can’t afford to drop cash on those.

And here’s the franchise’s next Hall of Fame second baseman, Jose Altuve! Well, hopefully that is. I’m praying that he has a long and storied career, and that the club is smart enough to keep his pint-size butt here in Houston for good. Watching him chase down and win the batting crown this year was so much fun. Plus, he wouldn’t let the team take him out of the last couple games, instead opting to go all Ted Williams and win it his damn self. Yeah!

Roger sent along Bowman cards, which means prospects! Two of these guys made their big-league debuts this year, with Santana being pressed into service early and failing miserably at the plate. He needs some seasoning, and was nervous as hell. Folty here is a straight-up beast, though. I got to see him pitch for AAA Oklahoma City when both of us were visiting Nashville, and the man can bring it. He got some nice relief appearances at the end of the year, and was pumping 98 gas easily in most of his outings, breaking 100 on several occasions. Oh, and he was starting in AAA. I think he gets turned into a closer, but I also the Astros would be fools not to give him a shot in the rotation first. 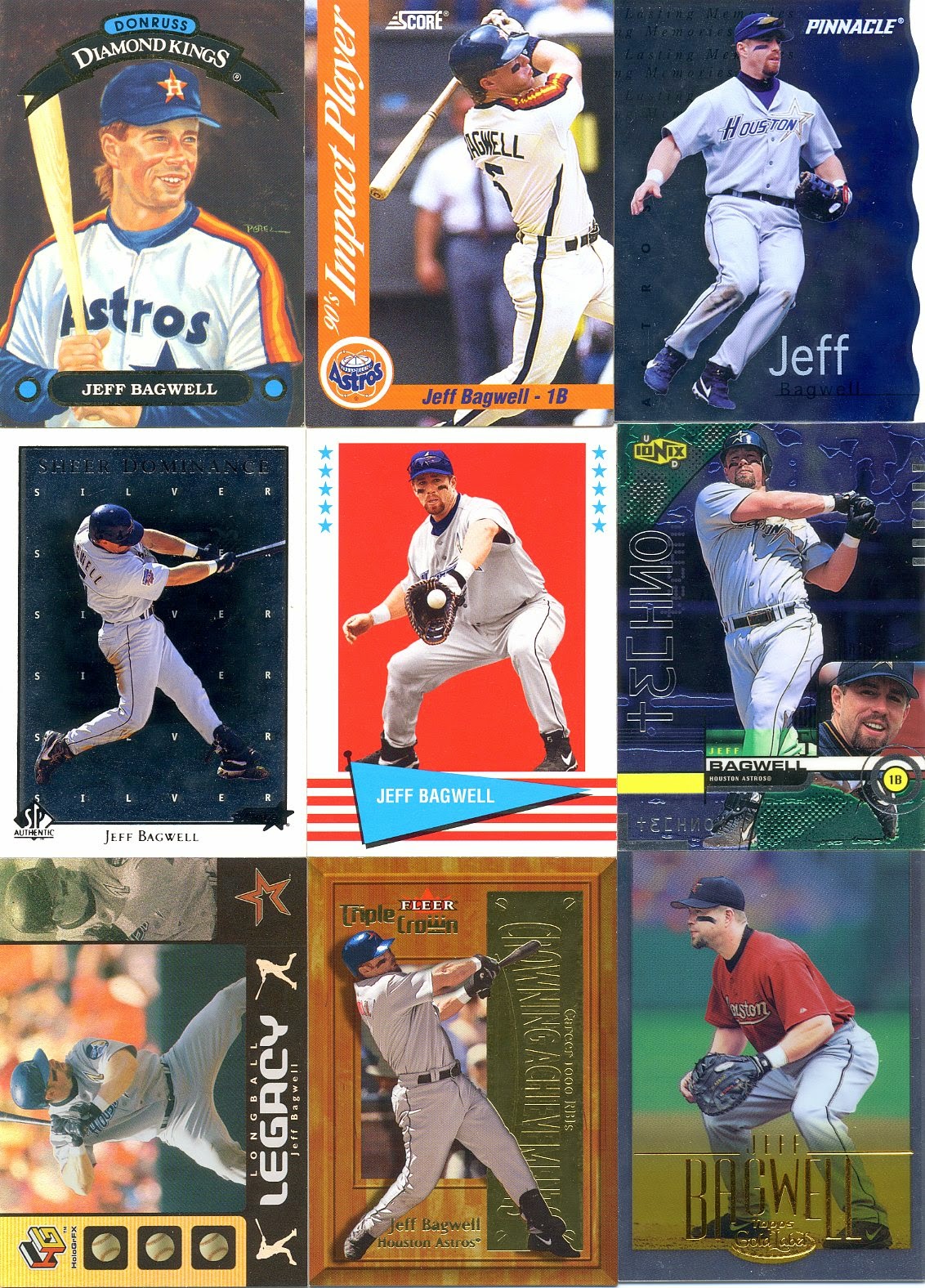 Last and certainly not least comes my hero, Jeff Bagwell. I needed all of these cards – the only one I had already was that Diamond King in the upper left, so the dupe will slide into my DK sets. I don’t know if I’ll wind up chasing all of them, but I’m definitely hunting down the ’93 borderless set.
Roger, you really outdid yourself sir! You certainly outdid me, I’m afraid, so I’ll have to send another package back your way to make up for it. Thanks for the stellar cards!
– Bru

0 Replies to “Cards from a Masked Man!”