So an unexpectedly quick move happened on my end, and I’ve become integrated enough at work that I don’t really get time to post while there. Thanks to the several of you that have sent packages my way recently, I sincerely hope to dig something up to send back your way soon. I’ve had a bevy of TTM returns as well. I’m well overdue for some posting at this point.

Ok, time to blast out another post from my E-Motion box break. Here goes! 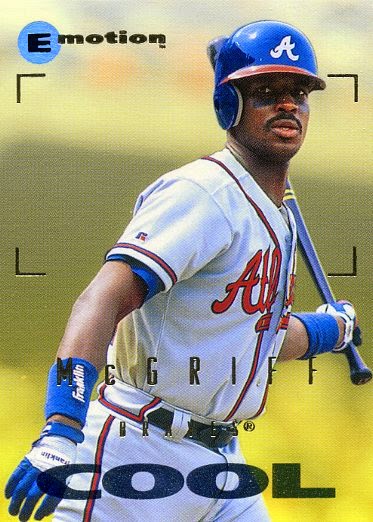 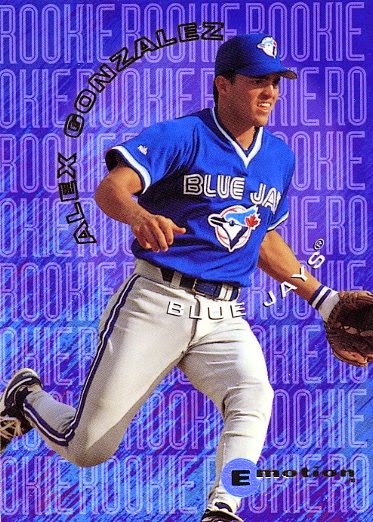 Pack thirteen includes a very nice Fred McGriff card indeed, and yet another Rookies insert. Look, it’s one of the Alex Gonzalez shortstops – that wasn’t a confusing situation at all, especially considering that both wound up playing for Toronto at some point. 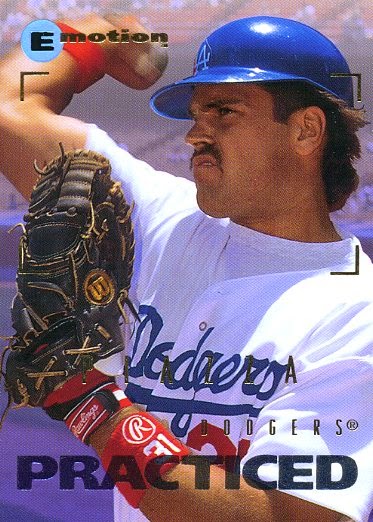 The big highlights from pack fourteen are the duo of young catchers. Piazza already looks huge here, and it’s only 1995. Meanwhile, Javy Lopez still has a bit of growing to do. 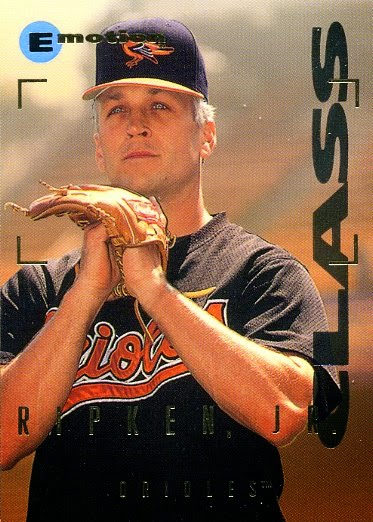 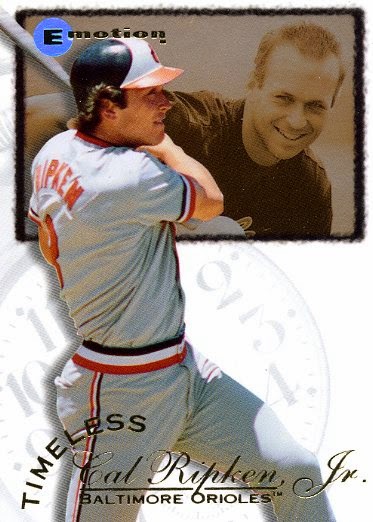 Cal Ripken hot pack! Class is probably the best way to describe Cal, after all. Look at that great early shot of him on the right. 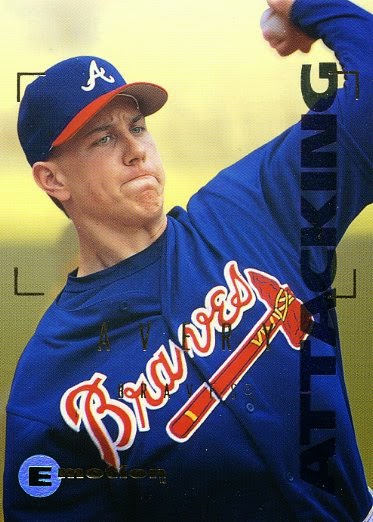 Pack sixteen has four heavy hitters in it, including the Rocket and Steve Avery. Roger ought to be in the Hall, and I think with time that’ll get rectified, but for now he’s going to be stuck waiting. 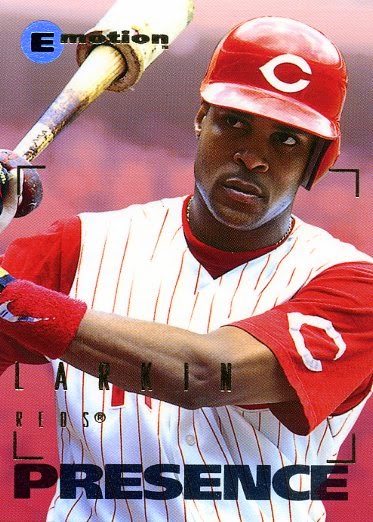 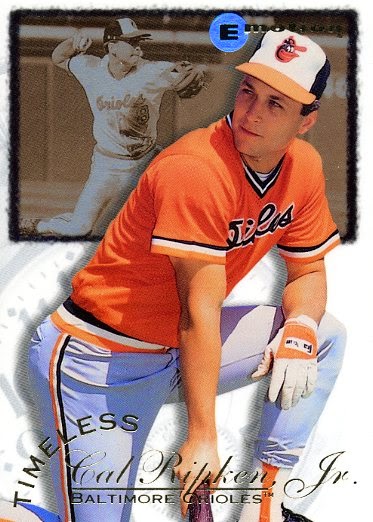 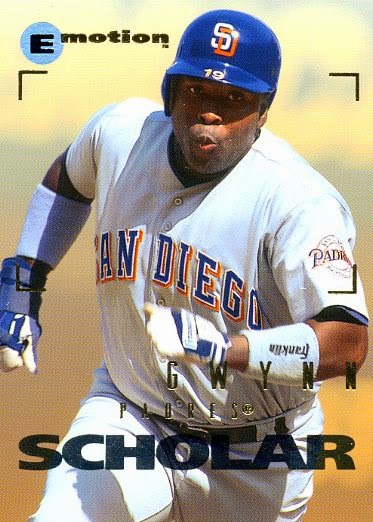 Pack seventeen contained another Timeless Cal Ripken insert, this one featuring a beautiful day-glo orange uniform from the early 80s. Also found within was another of the all-time great shortstops, Barry Larkin, and a hustling Mr. Padre. As we all know, scholar is one of the best words to describe Gwynn.

Counting the Ripken insert, this eight-card pack featured four Hall of Famers. That doesn’t even consider Andres Galarraga, for whom you could make an argument. 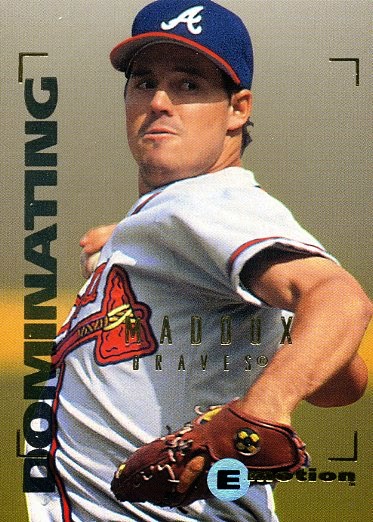 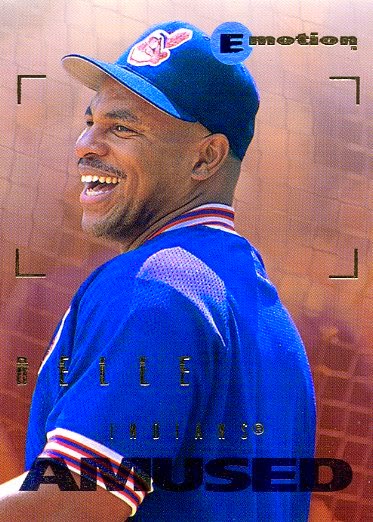 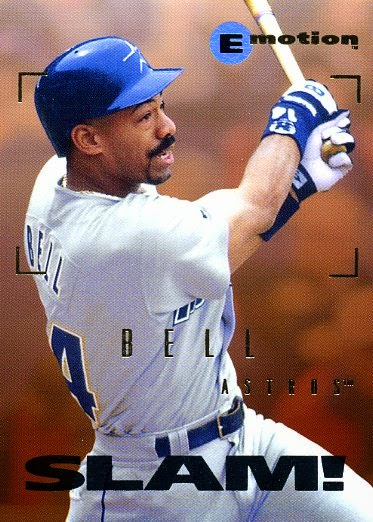 
I’m trying to keep these posts a little quick, so I held Maddux out of the last pack in favor of this one, pairing him up with another fellow famous for playing on a Native American-themed team, Albert Belle. I know he had a pretty sour reputation with the media (or most of them, it seems), but I absolutely loved watching that guy hit. He’s a name who’s definitely on my wanted list when it comes to autographs – I think I wrote to him twice as a kid without success.

Finally, we’ll close out with a nice looking card of Derek Bell, from the days before he became a cranky veteran who thought he was too good to compete for a job. The big SLAM! is a nice touch – I’m not sure if he hit one in ’94, but he certainly provided some nice pop in the Astros lineup for a few years.

Ok, that’s all for me tonight. I’m hoping to crank out several more posts before too long.