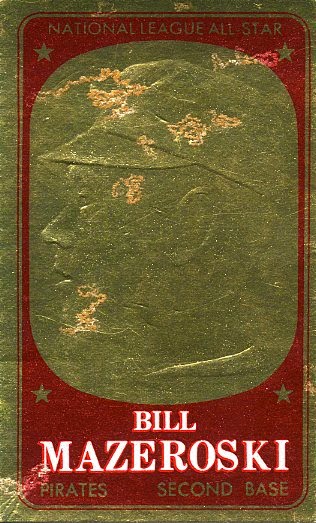 This post depicts one of those eBay mini-sprees I happen to go on from time to time. Of course, I’ve been away from the blog a bit, so this one actually happened several months back, around October.

It all started with a hunt for a Minnie Minoso card. I wanted to write Minnie for an autograph, and in searching through his cards to try and figure out which one would make for a good signature, I settled on a ’57 Topps, ’54 Bowman, or ’53 Topps. Well, a ’91 Archives of a ’53 Topps card, because there was no way I could track down an original.

Anyhow, after striking out on some very reasonably priced versions of the vintage cards, I threw in a 10-cent bid on an Archives card. Then I started looking through other items from the same seller and this beauty of a Mazeroski appeared in the list.

Well, I thought it was a beauty. As it turns out, it’s much more scratched up than I had anticipated. These didn’t show up in the listing photos, and anyone who’s had some experiences with these old embossed inserts is bound to be familiar with these flaws.

All told, I paid about 60 cents for it though, so it’ll hold a spot in my collection until I can find a suitable upgrade. 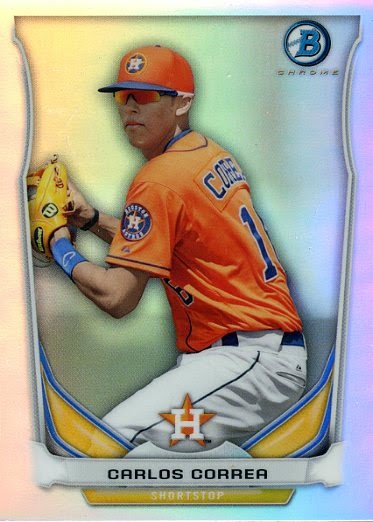 Everything in this little shopping spree clocked in at under a dollar, although I don’t recall how much at this point. With mini prices like those, I decided it was well worth it to pick up mini cards like these.

Ok, sorry for the pun. That was pretty bad. The Correa is a top prospects insert from 2014 Bowman, and that’s a superb copy of a ’75 mini of Goose. 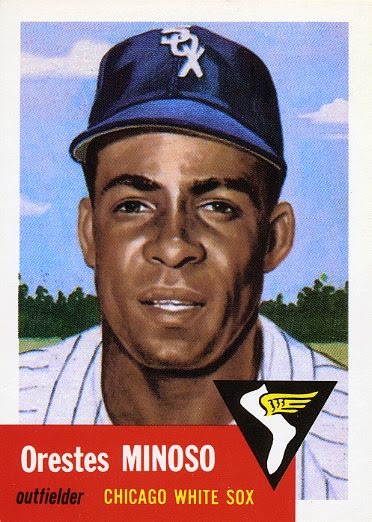 Here’s the other Minnie that I mentioned. I did a little research and found out that Minoso signs through the mail, but for $15 a pop. That means this Archives will stay in my collection unsigned. I went out not long afterward and found a pretty good copy of that ’57 Topps, which I plan to send to him soon. I’d much rather have him sign a nice piece of vintage cardboard, especially if I’m shelling out a little dough for it.
I mentioned how much I loved those old Donruss pop-ups in my last post. This pre-Giancarlo Stanton from 2011 Lineage actually echoes their predecessor, the 1964 Topps stand-up inserts. Pretty sweet, if I may say so.

The other cards that sealed the deal in this spree were a pair of Folty parallels from 2014 Bowman Platinum. They are super-shiny, gorgeous in hand, and unfortunately feature a prospect I love whom we traded. I’m hanging onto these, though. The green parallel is numbered to 399 – nothing to sneeze at, but pretty neat.

Thanks for playing a little more catch-up with me. Hopefully I can knock out a few more posts this week.