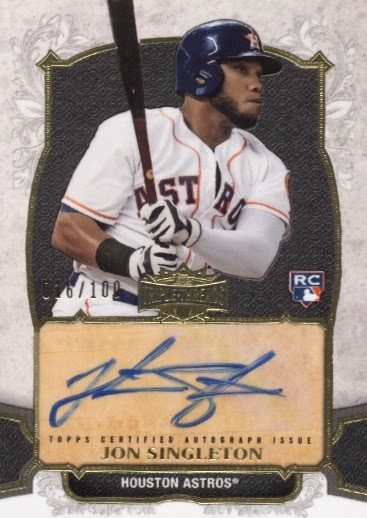 As I frantically try to catch up on all my drafts (I’ve made it a goal to have them all written and scheduled by the end of March), it’s time to show off yet another Catch O’ The ‘Bay.

When I saw this card pop up, it was simply to good to pass up, so I made sure to keep a close eye on it. Singleton’s autographs popped up in several sets last year, and I think this one from Triple Threads is particularly nice. I nabbed it at a nice low price – I don’t remember quite what it was, but it was something like six bucks after shipping.

I know spring stats are mostly meaningless, but it looks like Singleton should be able to start off strong this season. Hopefully his bat is lights out and he causes a bit of a lumber jam in the lineup. Those problems usually have a way of sorting themselves out, but it’d be really nice to see the Astros have more bats than they have spots.