Today a friend and I played hooky – with proper authorization from our respective jobs, of course. Louis here (on the left) is a buddy of mine who I met when I was barista-ing at Catalina Coffee. He doesn’t own a car, rides his bike everywhere, and is littered with tattoos. He’s a lifetime Yankees fan (boo) but adopted the Astros decades back when he moved to Houston. He’d ride by the shop in the morning, hang around and chat baseball with me for half an hour before heading to work. 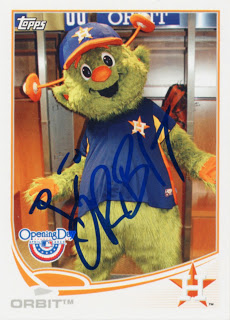 I went early and managed to land a couple of autographs in the pre-game. The Orbit is for my lady, she adores him. Tony Sipp actually got some work in this game. I really like him, he’s turned out to be a great pickup. I missed an Altuve signature by about three feet, he signed about ten items and stopped just short of me.

We caught some field-level seats for cheap on StubHub around a month back, right at the end of the A’s dugout on the third-base side. In reward, we were treated to a fantastic start from our ace, Dallas Keuchel, followed by a pair of good relief innings, and topped off with an epic bomb of a home run from the man, the myth, El Oso Blanco – Evan Gattis. Seriously, take a look at this puppy.


Everyone in the stadium knew it was gone at the crack of the bat, it was so authoritative: 443 feet, onto the tracks. Everything comes together for a 6-1 smacking of the Athletics, pulling the Astros record up to 27-14 and putting us 6 games ahead of the rest of the AL West.

I swung by the post office after the game and checked my mailbox only to find an epic flat-rate mailer from Bo Rosny. Apologies for my lack of decorum, but I have already wrent it asunder and begun pawing through the cards. Look for a post or three to come featuring highlights from these huge stacks!

0 Replies to “Playin’ Hooky at the Park”