If you’ll recall, one of the smaller details in my last post was that I was out at a card show when my house was broken into. I haven’t shared anything from the show yet, but I did pick up several additions to my collection, including a trio of Houston autographs. Now, I’m scanner-less due to the burglary, but I can’t just sit idly by and not post anything. So let’s start off with a bunch of new autographs that I’ve added to the roster.

These were the three show pickups. One of my goals for the show was to see if I could fill any holes that I won’t be able to get through the mail. Buzhardt and Larker have both passed on, so they were easy pickups to make. Glenn Davis was going to cost me some money either way, so nabbing him via a show pickup made sense to me. These cost me five a pop, which is just fine with me.

Before I left to go work a ridiculous gig in Austin this past weekend, I stopped by the mailbox and wound up with some very pleasant surprises.

First off was a trio of Bruce Bochy autographs, including his 1979 rookie card. I lucked into an ’81 Fleer set (to be discussed at another point) and have designs on trying to get as many cards from the set signed as possible, just because I’m in love with it. I’d nabbed the rainbow jersey ’81 Donruss at a card shop and bought an extra just to send to Bochy. These took just over a month to come back.

The next one, though, was really great to see. 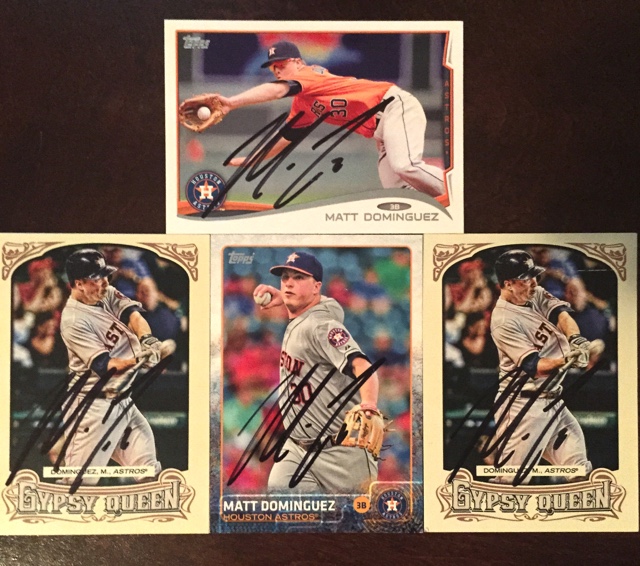 I finally wound up with some Matty Derp-minguez autographs! This was my second time trying to write to him, and I found success sending it via AAA Fresno. I’m not sure if he’ll ever be back up with the big league club, but he was fun to watch at the hot corner for a bit. Matt got my cards back to me in 36 days.

Now here’s one that I was starting to worry about – just a little. Brock Davis spent a small amount of time with the Colt .45s, and his rookie card – the only one of his in a Houston uniform – just so happens to be shared by none other than Willie Stargell. I had that card in my eBay sights for a loooong time. Don’t worry, that’s not a ’63 though in the photo, it is just a reprint. A pair of them popped up in my search, and that signaled a brilliant solution to me potentially having to track down multiple ’63 Stargell rookies. Brock signed all three cards I sent, as well as the two index cards I typically include for protection and potential bonus sigs – you never know! These took 34 days to return.
And finally, the big wait. I’d sent this one back in Spring Training, in hopes that it might find its way back to me.

My gamble paid off, and I got back all three Jason Castro cards signed! This was an awesome surprise. All told, they were out for 119 days. They are pretty nice looking signatures too, not just a bunch of scribbles or a pair of initials. I’ll take a “J – Castro 15” anyday!

These seven new additions bring my auto roster up to 175 different players in uniform. That’s about 1/5 of the all-time roster. Not too shabby so far.