The eBay bug bit hard recently, but these pickups were nice and cheap. I’ve taken a look at this lovely Mike Scott jersey relic from 2005 Topps Pristine Leaders a couple times, so when one got relisted it hit my home page in the, “this probably interests you, so spend your money!” section.

It had a surprisingly low starting price, so I decided to take a look at the seller’s other offerings. Lo and behold, I found another Astros relic at a bargain price, so I put bids in and came away with both of them.

Before I get to the other relic, I have to talk about this photo first. Why? Because the seller sent along extra goodies! How great is that?

I’m actually working on a set of these 1990 Topps Coins, so a pack of them was strangely welcome around these parts. I needed eight of them, but the Sandberg takes it down to seven. Boggs and Tettleton are both up for grabs, and if you need any from the set, let me know because I have a ton available. For those of you curious whom I still need, they are the following: Puckett, George Bell, Molitor, Sheffield, Von Hayes, Larkin, and Robby Thompson. 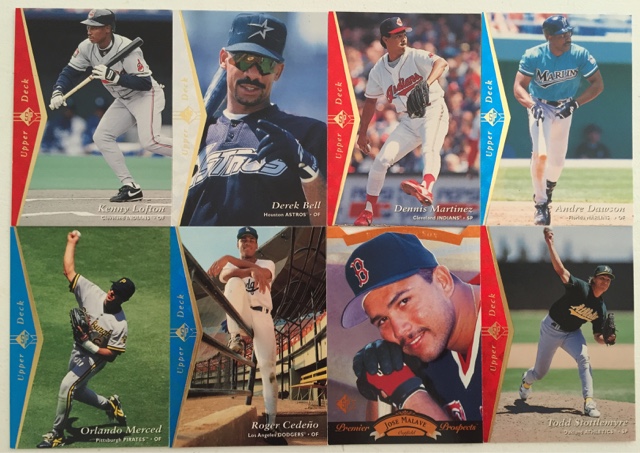 As a kid, I didn’t have the budget for SP in ’95 – I think I bought a lot of Leaf and e-Motion instead. Thanks to this pack, I learned that the “electric” parallels are officially called “Superbafoils.” Imagine that on a package now, heh. I’m not complaining about landing one of Operation Shutdown, though, or landing nice cards of Lofton, Hawk, el Presidente, and Todd Stottlemyre down there is now likely going in his envelope. Merced, Cedeño and Malave are all on the block.

So what was the other relic? Only the latest addition to my Bagwell collection! 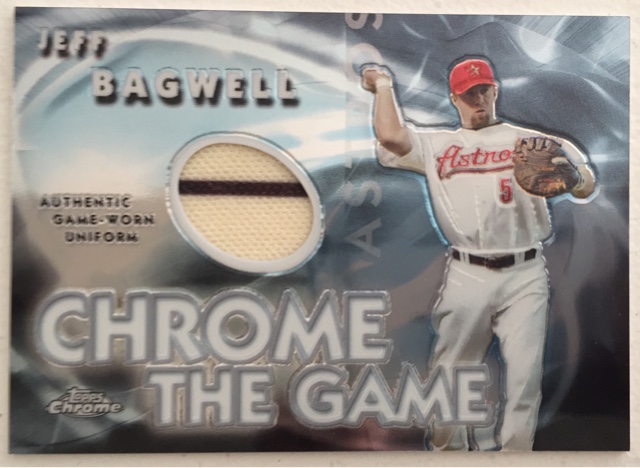 That’s a lovely 2005 Topps “Chrome the Game” jersey relic, complete with a nice pinstripe and some infield dirt rubbed into it. This puppy looks fantastic in hand. I’m nearing 850 different Bagwell cards now. I landed this one for a buck, and the Mike Scott was $3.25, plus a couple dollars in shipping and the extras – not bad at all!

Today’s post is a double Catch o’ The Bay entry, because I found two of the 2015 Tier One Astros autographs from another seller, and I landed them for less than four bucks including shipping!

I present to you Brett Oberholtzer (he of the massive frustration this weekend) and Mike Foltynewicz (he of the traded for some portion of Evan Gattis), numbered 36/299 and 286/399 respectively. These are amazing looking cards in hand, and the Obie fills another spot on my Astro-graphs checklist. Here’s hoping he can work out the kinks and come back up to the club, because aside from the attitude lapse this weekend he’s been really fun to watch. I mean, I absolutely love the dude. Him throwing at A-Rod this week after Young’s dinger was just unfortunate.
– Bru