by MarcPosted onJune 17, 2015July 14, 2019
Back at the end of May I found a nice eBay auction for a lot of certified Astros prospect autographs. So, I put in a little bid and voila – netted several more names that I can now check off my list. 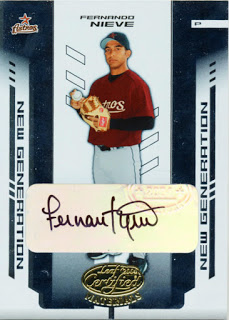 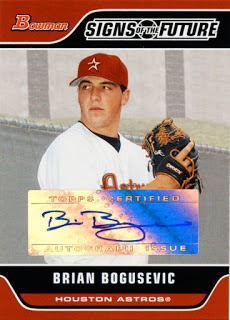 We’ll start with a couple of pitching prospects: Fernando Nieve and Brian Bogusevic. Nieve made his way up to the club in 2006, with a brief return in 2008 before the Astros cut him loose and he was claimed by the Mets. Nieve is currently pitching in the Atlantic League for the South Maryland Blue Crabs. Bogusevic flamed out as a pitching prospect, and spent a few years in the minors reinventing himself as an outfielder, getting a call up to the Astros in 2010 and spending three years in Houston before getting waived. He’s currently sporting a healthy offensive line for Philadelphia’s AAA Lehigh Valley IronPigs. 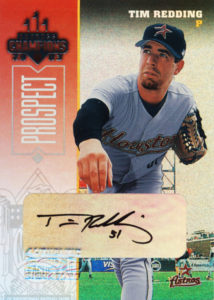 Here’s a pair that had some more impact on the club. Towles was our catcher of the future for a period, until Jason Castro pushed him aside. Redding came up in the early 00’s and was a part of the Astros young rotation (except for Shane Reynolds) that was loaded with talent. Tim was the only one in this lot whose autograph I already had. 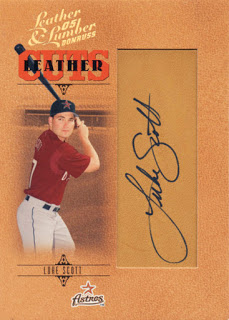 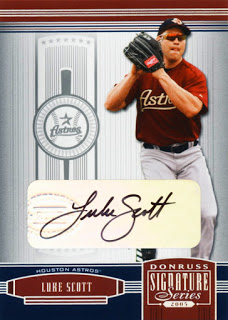 I netted two really nice Luke Scott autographs in the lot – look at that beautiful signature! Unfortunately the really cool Leather & Lumber on the left was sitting out on my bookshelf and was taken in the burglary. Luke spent last year playing in Korea and started off 2015 tearing up the Mexican League in Puebla (7 HR and 27 RBI in 28 games) before getting picked up by Toronto and is currently stashed in AAA Buffalo.

The final piece in the group was this great Wesley Wright from 2008 UD Documentary, an ungodly beast of a set. I loved watching Wesley pitch for the club, he was a fun lefty with a very nice curveball. Alas, he was lost in the “dump anything valuable” phase of rebuilding. Wright is currently on the 60-day DL with the Orioles.
So aside from losing the Luke Scott up there, this was a great package! Hopefully I can find another one to replace him.
– Bru