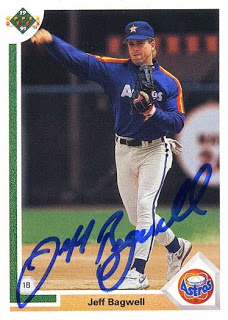 Welcome to another new feature here at Remember The Astrodome, my Story of an Autograph series. Here I’ll regale you with tales of autographs I’ve collected over the years, how they were obtained, and what may or may not be special about them.

We’ll start off with one of my earliest and most favorite autographs, Jeff Bagwell on this 1991 Upper Deck rookie card. I didn’t originally intend this to be a crossover post, but we’ll go ahead and count it as Bagwell Bonanza #2, I suppose.

How Was It Obtained?
This one is up among my most favorite autographs not only because it’s from my boyhood hero but also because I got it way back in February of 1992. Bagwell was fresh off his amazing rookie season and had just garnered the 1991 NL Rookie Of the Year award. The Astros held a FanFest for what I believe was the first time, and my father took me to meet some players and have a pretty fun afternoon. I don’t quite recall if he shelled out $5-$15 for me to get Bagwell and a few others, or if I had access as a standing member of the “Astros Buddies Club,” but I do remember getting this gorgeous signature and a baseball signed (that’ll come later in the series). As with many players, Jeff’s early signatures were a little more thorough and elegant than subsequent years.

The HOF ballot totals will be revealed this evening at 6 pm. Currently, Bagwell has dropped down to 76.8% (149/194) with around 250 votes still to be announced. I’ve got my fingers crossed that he can pull it off, but it looks like 2017 might be the year. I’m hoping for a 70+ percentage total.
In related news, Billy Wagner has 19 votes so far, and still needs another 4 or 5 votes to remain on the ballot for next year. Wagner’s rate stats are astounding, and the man racked up over 400 saves. His K/9 rate is a ridiculous 11.92, but the knock on him are his save totals aren’t quite as high as some want, and that he only pitched 903 innings. No reliever in the hall has less than 1000 IP. Still, his 2.31 ERA is second only to Mariano’s 2.21 among pitchers with 900+ innings, and his 1.00 WHIP is tied for first with Eckersley. The man deserves more consideration, so I’m hoping he picks up the additional votes to make it to the next ballot.