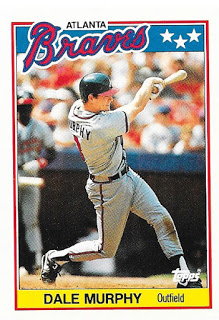 Today I came home to a small package of cards from fellow blogger and Dale Murphy fan extraordinaire, Steven at The Card Chop! I’d sent Steven a stack of cards from ’81 and ’84 Topps, as mentioned in the grand set breaking post from last week. Other packages have gone out and still more are yet to come. If one thing is going to be true about 2016, It’s that I’ll certainly be a more active trader – at least until school kicks back up. Having gotten settled into the house and carving out a small home for my collection, I’m much more adamant about getting it better organized. This means getting rid of some cards, which inevitably means that there will likely be some coming back my way, which means trade posts!

For starters, and most appropriately, Steven sent along a Dale Murphy that I needed for my 1988 Topps UK Minis set. I’m down to 32 cards to go for this one. 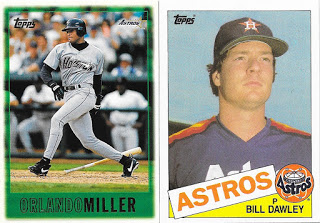 Steven also included a few old ‘stros in the bunch. The Dawley reminded me that I needed to send him a letter, which I wrote tonight. Hopefully there’s another signature in my mailbox soon.

Finally, Steven also knocked off some cards from my 2015 Update needs, which is quite fortuitous given that it’s a list I haven’t even made yet. The Gregerson is a Throwback variation, and the Gomez Gold parallel looks pretty darn sweet in hand.

Thanks for the cards, Steven!

0 Replies to “Cards From The Chop!”