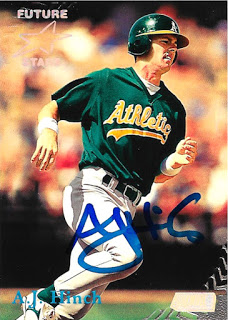 I really should be doing some Business Modeling homework at the moment, but my brain needs a break. Plus, it’s gorgeous outside, so I figured I’d sit on the porch and bang out a long overdue post.

This one happens to be two months overdue at this point, but who’s counting anymore? Back in January when classes were yet to begin or just getting underway, I managed to hit up a few of the Astros “Winter Caravan” stops, in hopes of making some more progress on my autograph project.

One day I happened to get done with work early and caught the tail end of an appearance at a Whataburger across town. For those of you not in the know, Whataburger is pure glory. Do yourself a favor when you come through town.

Marwin Gonzalez, A.J. Hinch, and Big Jon Singleton were the scheduled ‘stros, so I ducked inside. I quickly spotted Marwin and A.J. talking to some fans and reporters, but I’d run out of stuff for Marwin to sign and Hinch just now got his first Astros card in 2016 Heritage. So I landed another Hinch rookie, and went looking for Jonathan.

There’s a fairly standardized system for these appearances. They’re one to two hours long, and the team will typically have one guy “work” behind the counter, one in the restaurant talking to fans, and one at the drive-thru, handing out food. With Singleton nowhere to be found, I knew what I had to do. 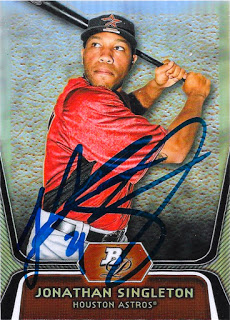 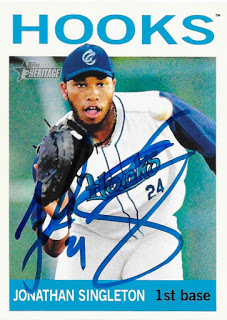 So I got back in my car, and pulled through, ordering a sweet tea. Jonathan handed it to me with a big smile, so I asked if he’d mind signing a couple cards. He happily obliged, and I drove off with these two new additions to the collection.
The next day, three Astros were scheduled to make an appearance at the Chik-Fil-A down the street from our office. Literally, I can walk there in less than five minutes for lunch (and certainly have before). The names: Dallas Keuchel, Jose Altuve, and new closer-to-be Ken Giles.
It was a morning appearance, so I got there early and ordered breakfast, and sat around the madhouse that was an obscenely packed restaurant and patio. Eventually the players arrived, and I’d positioned myself well by the door. I managed to ask Jose, and he motioned that he had to get inside. Strike one.
So I dashed around the restaurant to the side door, sneaking in to try and land him at the counter. He signed two baseballs for the people next to me before walking back behind the counter. Strike two. 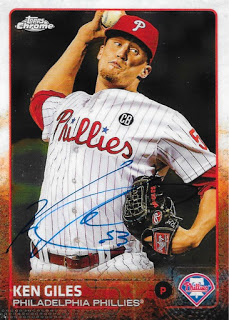 Keuchel started taking orders, and I briefly attempted to get him before realizing that was pure futility. Giles and Altuve had been ushered toward the drive-thru, so I went to my backup plan. This time I opted for an Arnold Palmer.

To my chagrin, it wasn’t Altuve doling out chicken, but rather Ken Giles. It was still crazy inside, and that wasn’t helping the drive-thru line at all either. My Arnold Palmer hadn’t made it to the window yet. “I’ll get to the bottom of this,” Giles assured me with a smile, and then apologized for the delay. I could see Altuve over his shoulder, talking to the staff in Spanish and snapping photos. Low and away, ball one.

I asked Ken if he’d mind signing a card while I awaited my drink, and and he replied, “of course!”

Taking the card and marker, he turned over his shoulder to Altuve and remarked, “hey look, this guy came prepared!”

This was the moment – a hanging curve that I could either crush or foul into the stands, but I might as well swing. “Jose, I have a card of you too, would you mind signing it?”

“Sure,” he said, taking the card and chuckling as he squiggled upon it, “I have the worst sign[nature] in all [of] baseball.” 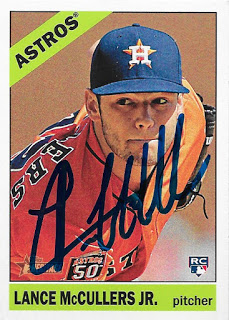 And with that, I landed what has been the white whale on the roster for the past few years.

There was one more appearance, later that evening. Seeing as I’ve written a novella at this point, I’ll make it brief. At an Academy (that’s a sporting goods shop here, in case it’s not in your region), young fireballer Lance McCullers Jr. and free-swinging, bat-flipping, dazzling third baseman Luis Valbuena were signing some autographs.

I approachedd McCullers, and not wanting to try for too much, settled for a single card. Seeing more than one small kid approach him with a Lance McCullers Sr. card, I asked how many times he gets asked to sign cards of his dad.  “I see them a bunch,” he said.

I will say, the kid has impeccable poise and an immaculate jaw. I’d be weak-kneed in the box facing him. 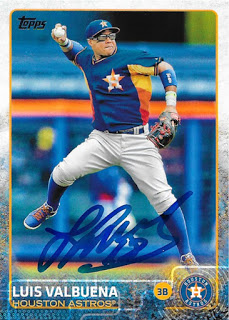 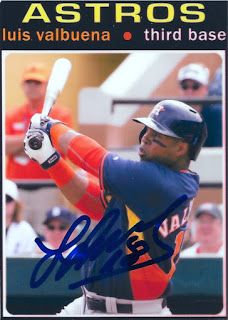 That brought me to Valbuena, who was consistently one of my favorite Astros to watch last season and simultaneously one of the most frustrating at the plate. His defense is remarkable, with great instincts, range, and a cannon arm. He’s got pop at the plate, and was literally one of the unluckiest hitters in the league last year, spending most of the season ranked in the top ten for hard-hit ball percentage and in the bottom ten for BABIP.  The faux-’71 on the right is a custom I made last summer when I apparently had some time. 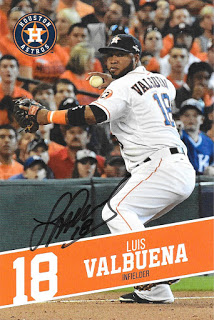 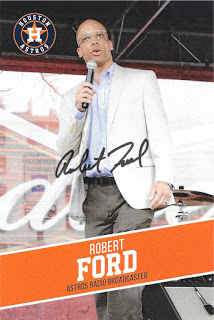 Robert Ford, who is in the new wave of great radio broadcasters, was also there – I wish I’d know that because I would’ve whipped up a quick custom for him to sign. I did walk out with these two postcards, though, and thanked Mr. Ford for his work. It’s certainly a pleasure listening to him call a game.
Ok, there are many more to come from the actual FanFest. First, I need to kick some spreadsheet butt, though.
– Marc