by MarcPosted onApril 6, 2016July 10, 2019
Alright, Opening Day has come and gone and I’m still way behind on posting. At least my Astros beat the Evil Empire in their first game! Correa looked great.
I promised a post on Astros FanFest. Back in January, my loving wife let me go up to the ballpark and stand in lines for five hours to get squiggles from men – mostly men younger than I at this point, save for the “Astros Legends” group and one Mr. Scott Feldman.
At this point, two months down the road, I’m fairly lost as to the order that this happened in, so unfortunately I’m at a loss for narrative here. I will say that it was a fantastically gorgeous day, 50 to 60 degrees with bright blue skies and the roof open at Minute Maid Park. However, that meant it was going to be a rather chilly day full of waiting in lines.
I zipped right in towards the front of the initial autograph group, and immediately knew it was going to be a good day. While I don’t have a whole lot of the day’s order down, this guy was definitely in the initial group of players. 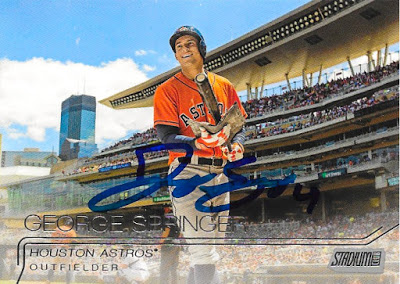 That right there made my day. So who else did I land during my frigid morning? 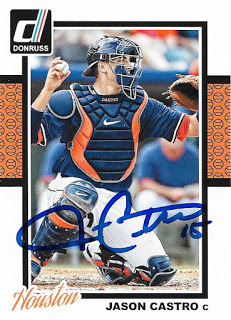 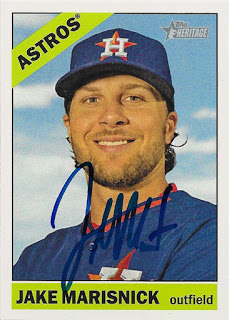 Well, I’m pretty certain the first group of players also featured Jason Castro and Jake Marisnick. Marisnick will start out as the fourth outfielder, and he’s hands-down one of my favorite guys on the squad: fun to watch, amazing in the field with a canon for an arm, and when he’s hitting it’s spectacular. 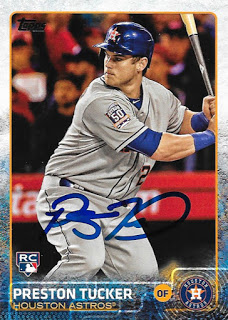 Pretty sure that Preston Tucker was in that first group as well. This kid’s got a nice bat. He’s currently 5th outfielder and could see the occasional DH at-bat with Gattis out.

Here’s another pair of these team-issued postcards. I had run out of stuff for Marwin to sign, so I just picked one of these up when I went through the line. Same thing with Chris Sampson, who was signing at the “Astros Legends” table. Hmm… Chris Sampson, Astros Legend? Yeah, I don’t think I’m buying that one. So who else was at this supposed legendary table? 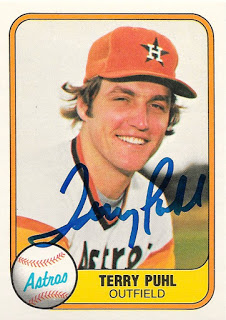 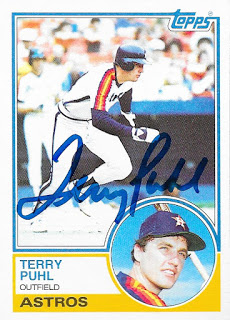 Terry Puhl, a long-standing and serviceable right fielder with a .993 fielding percentage, a .372 average in 13 postseason games across three series (including .526 in the 1980 NLCS) who played for Houston from 1977-1990. Terry’s a member of both the Canadian Baseball and Texas Baseball Halls of Fame. So, sure: legend status accepted I suppose. 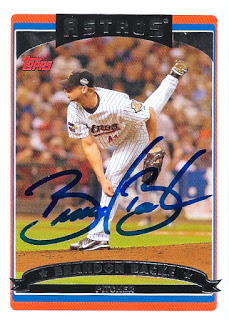 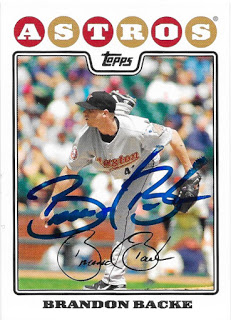 Brandon Backe, local hurler whose career was ended after police broke up a wedding he was attending and damaged his shoulder. Backe’s bona-fides? Excellent performances in the 2004 postseason, and fine performance in 2005 as the Astros made the World Series. Backe’s originally from down the road in Galveston, where he was a stud at Galveston Ball High School. Legend? Probably not. Nice to see? Most certainly. 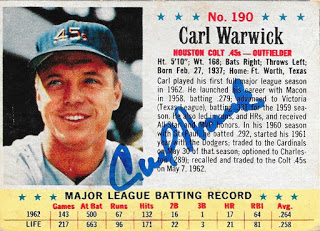 Next up was Colt .45’s outfielder Carl Warwick, who was involved in the first trade Houston ever made. In June 1962, the Colts shipped opening day starter Bobby Shantz to St. Louis in return for Warwick and pitcher John Anderson. Carl did hit for a nice bit of power in the short time he spent with the club. I was pretty happy to check this one off my list. Legend status? Meh, though he does get points for being involved in the first trade. 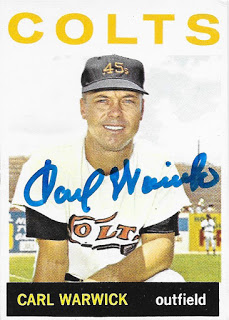 Warwick hit 23 homers across 254 games in his two seasons with Houston, before being traded back to St. Louis at the beginning of 1964, where he landed on a World Series champion. The Legends Table line was moving incredibly slow (so much that I thought I might miss the next signing), so the handlers were trying to make sure everyone only signed one item. There was a bit of a roadblock in front of me though, so Warwick was happy to sign a few more. “Don’t let her know I signed extras for you,” he told me, referring to the handler over his shoulder.

There were two more players at the Legends Table that were most assuredly legit, which I’ll save for the end of this post. 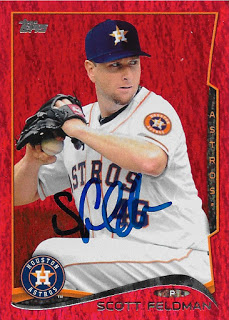 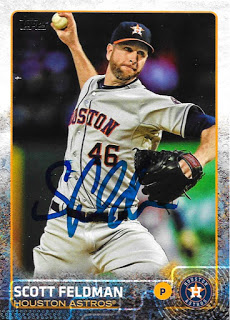 I hustled back to the current player autograph area to get in line for the next group of players. I’m fairly certain that Feldman was in this group, and he happily signed a pair for me. At the time, Feldman was the only player on the active roster older than myself – which did make me feel a bit silly for getting blue scribbles from all these guys. Since FanFest, the Astros have acquired two more guys that outrank me in age: new backup catcher Erik Kratz and rotation addition Doug Fister, who’s got about two months on me. 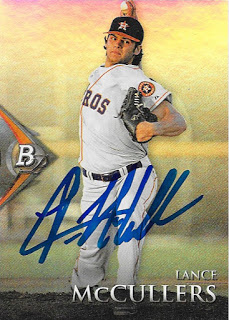 I saw Lance Jr. again, who was a real hit with all the fans. I’m hoping he returns to form once he’s back up with the club, which should be next month. The delay should actually help with his innings limit. 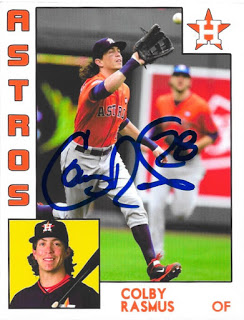 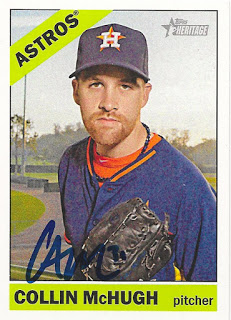 I didn’t have an Astros card of Colby, so I whipped up a custom, based on the 1984 Topps design with a bit of my own tweaking, and gave him an extra copy of it. Collin McHugh was super nice – I know he’s a big coffee drinker, so I asked if he’d ever been by the shop I used to work at (Catalina, best coffee in Houston) and recommended he stop by sometime. 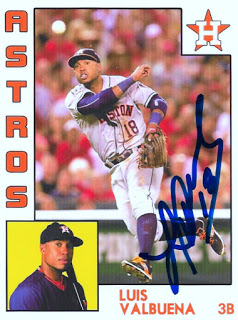 Two more Valbuenas for the collection, including another of these ’84-ish customs. 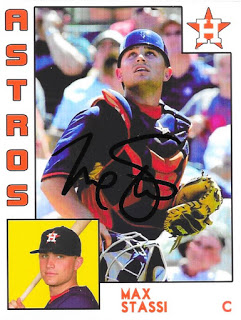 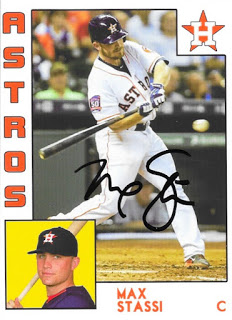 I had the same lack of Astros cards with Stassi, so I tried a couple options, and gave them copies as well.

When it came down to the last signing group, I didn’t actually have a ticket, but there were some names on the list that I really wanted. Groups hadn’t been announced until just before the signings, so I hung around for a bit to see if I could perhaps buy someone’s extra ticket.

Eventually, I lucked out and ran into a guy who’s friend wasn’t able to make it. He’d let me have his buddy’s ticket, no charge, if I’d use my one item to get a second Mike Fiers 8×10 signed for this gentleman.

I agreed, although just a wee bit heavy-hearted. I still needed a Fiers card signed, and that was one of the key people in this last group. 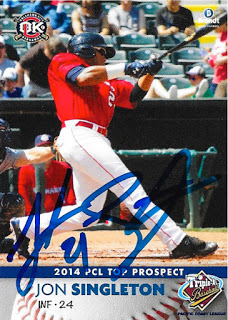 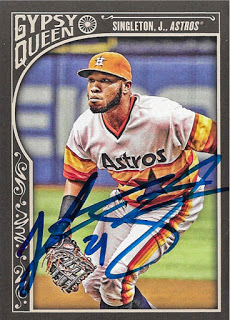 I netted another pair of Singleton signatures, including the great 15 GQ with the tequila sunrise jersey. 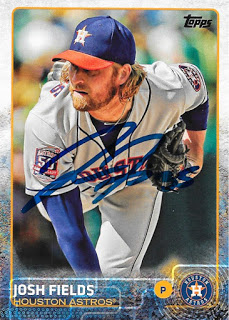 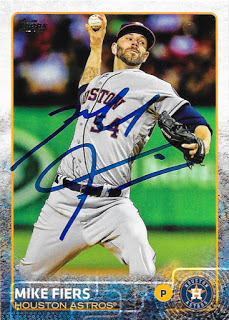 Josh Fields has been rather good out of the ‘pen, so I was pretty happy to come away with his signature. Fiers, by the way, was more than fine with signing the extra card for me. We were very close to the end of the line, so that probably helped. 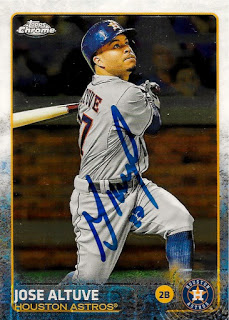 Alright, I’ve saved two of the biggest scores from the day for last: El Oso Blanco was in the third group if I recall correctly. The scan doesn’t show it well, but his signature really pops on this Topps Chrome card. Altuve was the lead man in the last group, and although I’d gotten him just two days earlier I felt like an absolute kid again when the prospect of getting another signature came up. I guess the bug never goes away.
Oh yes, let’s not forget the two true Astros Legends I mentioned earlier. 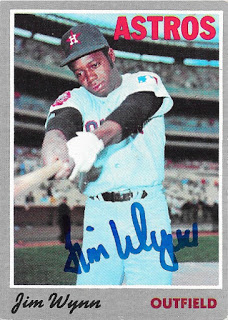 Yep, I came away with new signatures from J.R. Richard and Jimmy Wynn! I’d met J.R. before at a book signing, but this was the first time I’d gotten to shake hands with the Toy Cannon. They were also nice enough to sign a second card for me, though J.R.’s wife sure didn’t want to allow him to do so. She was trying to keep the line going, and J.R. will talk all day long given the opportunity. 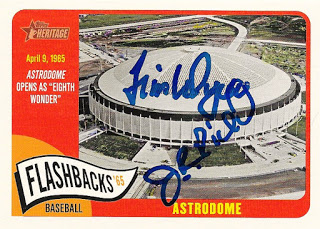 Here’s the extra card. If you have spares of this one, I’ll take them all off your hands. I’d like to get several more of these signed by former players.

Alright, I know this one was a doozy of a post. Hopefully I can get some trade posts knocked out in the near future.