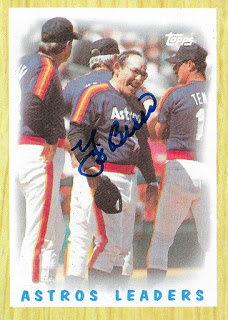 Hi again! I know you all wanted something special for the holidays, so I’m happy to let you all know that RTA is back. You’ll get to read droves of drivel about Astros cards and my autograph adventures once again.

Ok, so maybe it wasn’t at the top of your list, but I do hope you’ll enjoy the blog being active once again. I’m certainly looking forward to catching up on your collecting adventures.

Huge things have happened here in Houston recently. I wrapped up my MBA two weeks ago, and finally walked that stage after two straight years packed with classes. Gonna brag a little here, but I finished with a 3.85 GPA and earned a Dean’s Award, though it hasn’t been explained what that means. Now the job hunt can begin.

More notable than that, however, is that there is a Baby Bru on the way! Yes indeed, we’re expecting in May. In fact, in just a few days we’ll find out whether the toys will be pink or blue.

That means that I’m shuffling plenty of things around, and still looking to unload a huge portion of cards. I’ve got stacks building for a few of you, and would love to get plenty of these out the door before too long.

I’ve refocused my collecting efforts on Astros, a few select PCs, and whatever vintage may float my way. One thing’s for certain: my card budget is basically zero now, so I’m not too worried about new cards.

Autograph collecting brings me a great deal of joy, though, so that’s where I’ve chosen to spend my time this year. My mailbox has seen 160 returns this year, with a week still left on the calendar! On top of that, there were several opportunities to pick up autographs in town throughout 2016, and I made significant progress in my Astrographs project. I’ll do a tally before the end of the year, but I think I added close to 100 signatures this year. There have been some really fabulous additions, including that 1987 Topps Team Leaders card of Yogi Berra in the upper right. Berra spent a few years as an Astros coach in the ’80s, which overlapped with his son Dale’s time with the club. He was fairly instrumental in developing a certain young man by the name of Craig Biggio, who I believe went on to do pretty well for himself in the baseball world.

I really do have so much that I want to share with you, but for now I’ll just stick to the autograph returns that have rolled in this week. One of the things I started chasing was Award Winners (MVP, ROY, Cy Young, Manager of the Year, Reliever of the Year), so you’ll see a few of these guys in the mix. 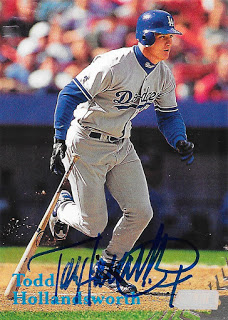 1. Todd Hollandsworth: 1/1 card, 11 days.
Hollandsworth was the 1996 NL ROY, and the fifth (!) Dodger in a row to win the award, after Karros, Piazza, Mondesi, and Nomo. I remember thinking that was insane that LA had managed to do that five years in a row. 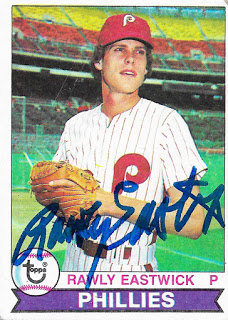 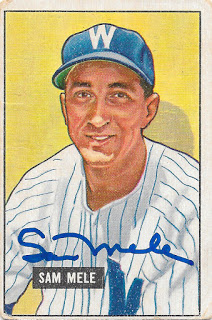 3. Sam Mele: 1/1 card, 8 days.
Sabath Anthony Mele, or Sam for short, is one of the oldest former ballplayers on earth, currently 16th on the list and set to turn 95 in January. He had a fine major league career, playing for 10 years, and probably would have been in the game a bit earlier had he not spent time in the Navy in WWII, where he played ball with Joe DiMaggio and led the Navy League with a .358 average in 1944. After hanging up his spikes in 1956, he went on to coach and manage, leading the 1965 Twins to the AL Pennant. 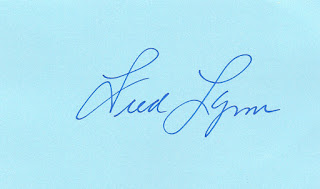 4. Fred Lynn: 0/1 card, 7 days.
Lynn was the American League’s ROY and MVP in 1975. A nine-time All-Star who hit the only grand slam in All-Star game history, Lynn’s fearless play earned him four Gold Glove awards. Unfortunately, it also provided him with several injuries that hampered his career. He wrapped up a 17 year career in 1990, finishing with a .283 average, 306 HR, 1,111 RBI and 1960 hits in 1969 games. I may try again – a little research has revealed that a donation to the FACE Foundation, an animal charity he supports, will get my card signed. 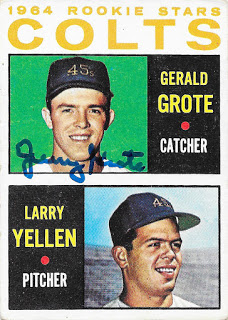 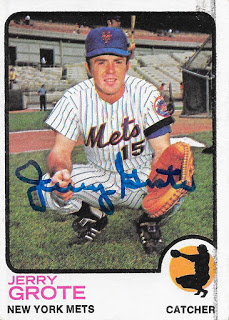 5. Jerry Grote: 2/2 cards (with donation), 47 days.
Grote came up with the Colt .45s, seeing action in 1963 and 1964 before spending all of 1965 in AAA and subsequently being traded to the Mets after the season. He was regarded as an excellent defensive catcher, making two All-Star teams and of course playing for the Miracle Mets that won the ’69 World Series. While Johnny Bench won all of the Gold Gloves, he was once quoted as saying, “if Grote and I were on the same team, I’d be playing third base.”

6. Roy Sievers: 3/3 cards + 2 index cards + note, 9 days.
Sievers is a phenomenal signer. The 1949 AL ROY came up with the St. Louis Browns, then struggled with shoulder and arm injuries for the next few seasons before moving on to the Washington Senators in 1954. The move rejuvenated his career, and despite the cavernous left field, the right-handed hitting Sievers absolutely pummeled the ball in Washington. He made five All-Star teams and in 1957 led the AL in homers (42), RBI (114), extra base hits (70), and total bases (331), while batting .301. 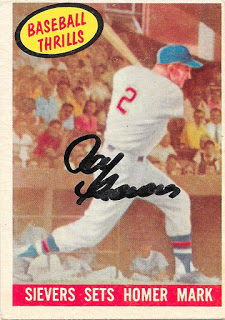 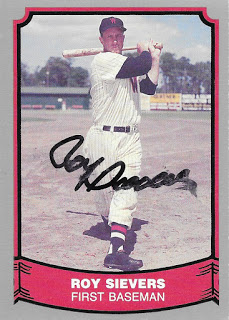 Sievers was only the 22nd player to reach 300 home runs, retiring with 318 to his name. He and Gil Hodges were the first two members of the 300 HR club to not make the Hall of Fame. In a note on my letter, Sievers expressed that he had a wonderful career, with his only regret being that he never got to play in a World Series. I really dig the ’56 up there and the ’59 “Baseball Thrills” cards, and hunted them down specifically to send to Mr. Sievers.

Alright, I suppose that’s enough for now. Merry Christmas to you all, and may your mailbox be full of joy. I’ll have more to come shortly.

0 Replies to “I’m Back! Merry Christmas!”