by MarcPosted onFebruary 16, 2017July 9, 2019
Hey blogosphere. I’ve let you down a bit – haven’t been keeping up with your blogs, haven’t been posting to mine. I have pulled off some trades – not quite at my ambitious goal pace – but hunting for a job and prepping for a baby have been taking up more than a little of my free time.
Tonight, though, there needs to be a blog post. Because I need a break from filling out applications, and last week brought in the latest Hall of Famer addition to my autograph collection. I’d seen a few recent successes with this one, and dashed off a letter. To my surprise, it came back in just six days! 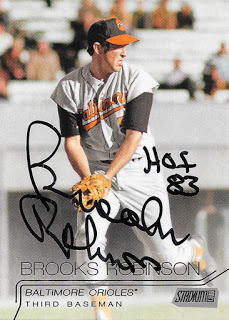 Oh, and it’s none other than the greatest third baseman of all time, Brooks Robinson! You know, he of the 16 straight Gold Glove awards and 18 All-Star selections. Mr. Robinson’s accolades stretch much longer, and include a pair of World Series championships (’66 and ’70), the ’64 AL MVP award, the ’70 World Series MVP award, and first-ballot HOF election in 1983. I had seen some recent successes with donations smaller than his usual fee (which I think was $60), so I tossed a card and ten bucks cash into an envelope and crossed my fingers. Getting this one back was a thrill, getting it back in just six days was extremely surprising.

Not only that, but Brooks actually took the time to (briefly) answer a few of the questions I posed to him.

Q: Do you have a favorite memory from your career?
A: 1966 World Series

Q: Who were some of your contemporaries who most impressed you? Are there any you think are underrated in baseball history?
A: Paul Blair

Q: Who are some of your favorite players to watch today and why?
A: Manny Machado, his offense and defense.

And finally, my favorite response of all time

Q: What did you enjoy most about the game of baseball?
A: It was my 1st love.

Oh, but it doesn’t stop there! Because not only did I land a fantastic and extremely satisfying success from arguably the greatest player at his position in baseball history, but he added an extra card! And not just any card at that, have a look for yourself: 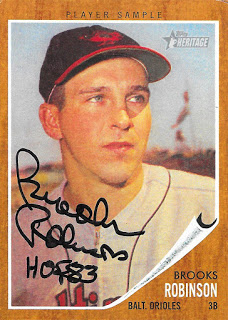 Yes indeed, that is an official Player Sample from 2011 Heritage. Someone told me that the print run on these was 1/1 – I have no idea if that’s true, but I imagine there aren’t many of them floating around. This would have been the proof for the Real One Autographs inserts in the set.
So yes, I do believe this goes down as one of my greatest TTM successes of all time. And with that, I’ll wrap this post and go back to my job hunt. May all your cardboard dreams come true.
– Marc

0 Replies to “Story of an Autograph: Another Amazing HOFer!”