by MarcPosted onJanuary 18, 2017July 9, 2019
It’s finally happened! As I’m sure you’re aware, the Hall of Fame results were announced this evening, and my boyhood hero finally received a well-deserved and long overdue phone call announcing his election. Congratulations Jeff!
In celebration of this fact, I went hunting through my Bagwell collection for any Hall of Fame related inserts. Surprisingly, there were only a few of these – I seemed to recall more, but this was all I found. Plenty of cards mention Jeff’s potential in their blurbs, and I have many fantastic inserts of him, but these three were the only ones to directly reference Cooperstown. 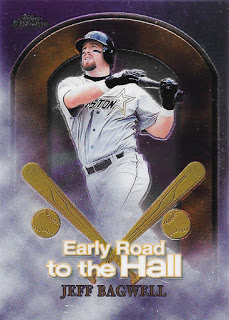 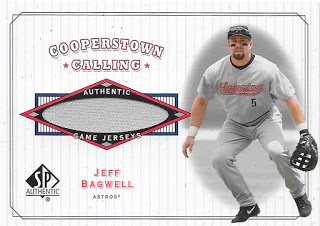 Finally, we’ve got a jersey relic! 2001 SP Authentic – Cooperstown Calling Game Jersey #CC-JB
Well Jeff, Cooperstown has finally called. If your shoulder had held up for another season or two, I think you would have gone in by your second ballot at the latest, but as it is you still hung them up as one of the top five first basemen of all time. You were a two-time 40/30 man, won the 91 NL ROY,  94 NL MVP,  and had four All-Star selections, three Silver Sluggers, and a Gold Glove. Not to mention you were perpetually underrated for your defensive and baserunning abilities, and racked up 449 homers, 448 doubles, 1529 RBIs, 202 SB and 79.6 career WAR. I know you spent the last few years playing the, “it’s nice if I ever make it,” card of politeness, but I’m so happy that this dream has finally come true for you. 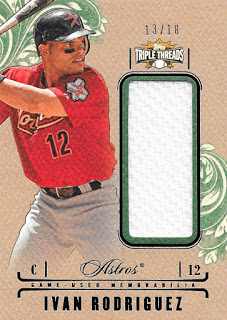 I’d be remiss if I didn’t mention that this former Astro also got a call to the Hall today – as well as Tim Raines, thank goodness! There aren’t many cards of Pudge in Houston out there, but for some reason in the past few years Topps has decided to start putting out more. This one comes from 2014 Triple Threads, and is a lovable PWS, numbered 13/18. To be honest, I thought Pudge would probably have to wait another year to get elected.